Why I worry about words 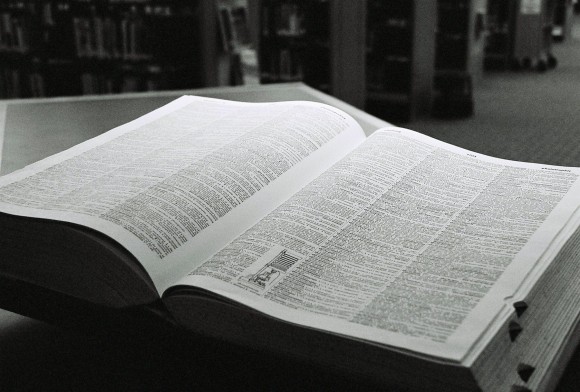 Here at Geez we spend a good deal of time talking about words. We’ll convene on the merits of an adjective, or we’ll lament the academic jargon punctuating a story. Sometimes our conversations are frivolous (a dictionary is always on hand to settle lunchtime disputes), but often the words we ponder carry with them the legacies of oppression or injustice. It can take careful consideration to settle on language that is clear and accurate but also compassionate and mindful of violent power structures.

For example, how should we respond to a writer who insists on using only male pronouns for God? What should we do about a sentence that makes flippant reference to “the gays?” Should we change “disabled people” to “people who are disabled?” Does it make a difference if the writer is gay or living with a disability?

These questions are important because when we use language, we’re not only describing what’s “out there” in the world, we’re also contributing to the fabric that makes up our cultures, churches, and communities. When we write or speak, we’re participating in relationships with others, and in doing so we can either subvert or perpetuate typical and problematic ways of being in the world. We can use words to interrupt thought patterns, or we can use them to affirm a troubling status quo.

This concern is foregrounded for writers and editors, but it’s relevant for everyone who communicates in everyday life. When I call the person I live with my “partner” instead of my “wife,” I signal that I’m uncomfortable with patriarchal assumptions about marriage. If in our churches we consistently and unflinchingly refer to “God the Father,” perhaps we reinforce the notion that “obviously a supreme being would be male, because men are always in charge and that’s just the way it is.” If we talk about “the gays” or “disabled people” as such, maybe we’re implying that gay or disabled people are essentially homogeneous groups, or that personhood can be boiled down to sexuality or ability.

We can choose our words to demonstrate solidarity, neutrality, or condemnation. For example, some activists argue that the term “sex worker” carries less stigma than “prostitute.” Likewise, whether we choose to call a violent demonstration a “riot” or a “protest,” that decision can influence our listeners’ perception of the demonstrators and their cause.

There are also some words we simply don’t use anymore because they’re offensive. Wab Kinew, among others, recently called out The New Yorker for using the word “squaw” in a supposedly humorous column that played on Native American archetypes. Value-laden labels like this can reaffirm legacies of racism, and without a doubt they help shape cultural power structures and colonial relationships.

And yet, as detractors are quick to point out, the pejoratively-named movement toward “political correctness” itself can be problematic. A lot of criticism around careful language use comes from conservative types who just can’t see the connection between the words we use and the power structures they reinforce. “Why,” they ask, “can’t we just leave well enough alone,” as if the legacies of patriarchy, colonialism, and racism are not still manifest today through the language we use.

Aside from stubborn complaints about the hassles of “political correctness,” there are some legitimate hazards to careful language use. The first is that too often we choose our words based how others will perceive us and not based on the desire to respect and dignify those around us. Without malice, many of us pick our words based on what our peers deem acceptable so as to avoid the perception that we’re judgmental or closed-minded. Politicians don’t really use “politically correct” language to avoid offending constituents, they do it to keep from exposing their backside to the public eye. Likewise, in “polite” company, you’re unlikely to hear someone being described as “fat.” This is partially to be respectful, but its also a matter of tact – nobody wants to be the one who breaks from convention. Sara Ahmed has written extensively about resisting this tactful impulse. She calls for “killjoys” who upset a climate of apparent decency for the sake of bringing oppression to light.

In radical and progressive circles the pressure to use only the most inclusive language is amplified. There’s nothing wrong with wanting to maintain a positive image, and most of us have good intentions, but nobody wants to look like a bigot, and the fear of saying something wrong can quickly escalate to defensiveness or antagonism.
This is the second hazard of careful language use: a culture of call-outs and in-fighting among progressives. Especially since the beginning of the social media era, a culture has emerged that consists of publicly shaming people who haven’t kept up with quick-shifting trends. As Asam Ahmad describes it in Briarpatch, “Especially in online venues like Twitter and Facebook, calling someone out isn’t just a private interaction between two individuals: it’s a public performance where people can demonstrate their wit or how pure their politics are. Indeed, sometimes it can feel like the performance itself is more significant than the content of the call-out.” There must be room for change in our cultural lexicons – this will take correction and discussion, and some folks will be quicker to adapt than others – but a culture of rivalry and antagonism is both toxic and unproductive. When defensive and accusatory arguments over word choice alienate potential allies and counteract movement-building efforts, positive cultural change comes to a halt.

To be clear, I’m not suggesting that marginalized people or their allies simply put up with slurs. I’m proposing that if we’re going to have a dialogue about the language we use, we should be intentional about respecting each other, forgiving honest mistakes, and working towards mutual understanding. This is particularly crucial for those of us with relative privilege, whose primary role is to listen and learn from those whose voices haven’t yet been heard.

The third hazard of careful language use is its potential to either reinforce an oppressive status quo or take the place of more substantial change altogether. To return to a previous example, sidestepping the word “fat” in everyday conversation might feel like an effort of tact or decency. But by avoiding the word (while freely describing other body types) perhaps we’re simply affirming a cultural assumption that fat is bad while other body types are okay. If various body types, races, genders, and abilities are to be affirmed, then our attempts at tact can sometimes betray a lingering assumption that marginal groups are inherently wrong. Our intentions may be pure, but in a case like this the supposedly “correct” choice of words may simply reinforce the notion that skinny is better than fat.

This is not to say that all language is value-neutral. We can’t just throw around offensive phrases as we please, and it’s up to each community to determine the language they use and how they’d like to be described. But, as Jila Ghomeshi argues in her book Grammar Matters, “correct” language is often loaded with its own contradictions and hierarchical assumptions. Herein lies the importance of an ongoing conversation and effort to respect and dignify each other through our words.

It’s also possible that the words we choose don’t actually translate into more loving and compassionate relationships with those around us. Calling fast-food workers “Sandwich Artists” while refusing to pay them a living wage does not constitute an effort at reducing economic disparity. Praying to “God our Mother,” is not on its own a sufficient effort towards dismantling two millennia of patriarchy in the church – but it is a step in the right direction.

So there’s no easy answer for those who want to curb legacies of violence through their words. But what’s clear is that language matters – whether editing a magazine or carrying on an everyday conversation, we can signal solidarity with marginalized groups, or we can begin to upset oppressive norms. Keep the conversation going in the comments section below. Tim Runtz is an Associate Editor and Circulation Manager at Geez. He lives in Winnipeg, Manitoba.