by Aiden Enns | Published 25th September 2014 in Ways of Seeing 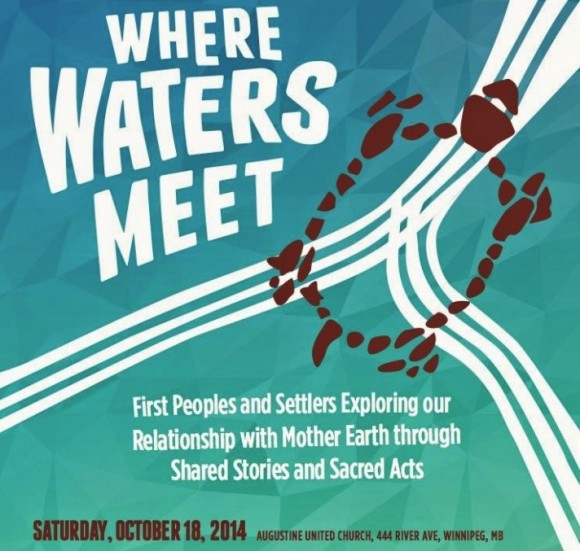 [This is a guest post from a friend who’s helping to organize an event for conversation among settlers and First Peoples. – Aiden Enns, editor, Geez magazine]

This year’s Faith in the City is scheduled for October 18, 9:00-4:30 here in Winnipeg, Manitoba. This is Augustine United Church’s annual and ongoing ecumenical, congregationally-based conversation, which seeks to explore the intersections of a justice-seeking church and urgent social and cultural matters.

Our conversation this year is WHERE WATERS MEET, First Peoples and Settlers Exploring our Relationship with Mother Earth through Shared Stories and Sacred Acts.

We’ll have ceremonies (including a water ceremony to start the day and another ceremony down by the Assiniboine River near Augustine UC), sharing circles, and a feast at noon. We hope to make this a community-building event, focusing on God’s call to care for all creation — both the land and each other.

Questions we’ll examine:
– How can we rekindle our spiritual connection to the earth?
– How can settlers/non-indigenous people and indigenous peoples be allies in actions to defend earth’s resources?
– How can the settlers among us find courage to become unsettled?
– In what ways has (western/colonial/settler) Christian theology/tradition played a role in bringing us to where we are today (e.g. the ecological crisis, the troubled relationship between first peoples/settlers)?
– Just as importantly as the previous question is: How can a decolonized and reimagined Christian theology move us to a new and sacred place?

Stan McKay, a Cree elder and former moderator of the United Church of Canada, has been instrumental in helping us plan the day, and will provide leadership on the day. Stan’s deep knowledge of indigenous tradition is highly respected in the first nation’s community. At the same time, he is a theology graduate from the University of Winnipeg (from which he also holds an honorary doctorate) and was ordained as a United Church minister on his home reservation in Fisher River in 1971.

Red Threads of Peace Playback Theatre Group will be engaged during the afternoon as well.

I hope I’ve piqued your interest with this brief overview. Please check out the details by going to the Faith in the City blog, where you can also download a registration form.