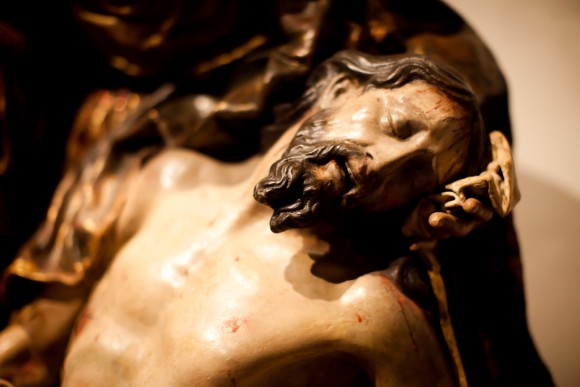 A while back I made a flippant remark on Facebook. It was directed towards my peer group (thirty-something white guys in pastoral ministry) who were posting comments about a talk Bruxy Cavey had recently given. I said that perhaps in the realm of Anabaptist white guys we should give a little more attention to someone like Mark van Steenwyk rather than Bruxy Cavey. At the time I did not realize how apt the comparison was.

I reviewed Cavey’s book The End of Religion when it first came out in 2007 and I recently received a review copy of van Steenwyk’s The Unkingdom of God. The main titles of both were openly critical of some aspect of Christianity and their subtitles nearly overlapped. What is more, both covers displayed an image of someone in a penitent position with head bowed low resting on a hand. Perhaps publishers collude. Be that as it may, there is a market and message for dealing with Christianity’s guilt and there is a spate of white guys who are trying to figure out how to atone for it.

After reading van Steenwyk’s book I stand by my initial comment. In many ways these books are written precisely for us white guys in the church. We are the demographic that received the historic authority of the church and as such we tend to be the group that can either be blinded to this reality or feel guilty for it. Cavey’s approach to the sins of the church is problematic. He argues that the “real” message of Jesus is revolutionary and so (essentially) the entire history of the church (and all other religions!) is wrong. This approach acknowledges the wrongs of the past but deals with them by simply believing we can reject them and reach back over them to recover the original message.

This is a common strategy when dealing with structural problems: that is, pretend we can opt out of them by creating a bypass to the real Jesus. This posture reminds me of the online social media expressions #NotAllMen or #NotAllChristians where men and Christians try to distance themselves from the violence promoted by sexism and religious superiority. What ends up happening here is that these responses become more about people justifying themselves individually than the work of addressing pervasive social issues.

Cavey certainly seems to support social justices but The End of Religion does not provide a helpful model for facing the pervasiveness of these injustices as well as our implication and response. To claim that Jesus brought an end to religion is not revolutionary. Indeed if we want to address the “sins of the church” we should look directly at a claim like this which has always made it easier for the church to sidestep dealing with the damage it has done.

Indeed, in a recent and ambitious critique of the logic of Christianity Gil Anidjar says explicitly that “Christianity is no ordinary religion: it is at the very least, and since the beginning, the religion of the end of religion.” There is nothing subversive about Cavey’s book; it just tries to claim that whatever is bad is clearly not what he is talking about.

Van Steenwyk’s approach is messier. Where Cavey promotes a direct spiritual connection to God not mediated by religion, van Steenwyk works towards an ongoing posture of repentance that must continually name our thorough implication in the powers of this world. Van Steenwyk names Cavey’s approach when he states that “usually our response to past injustices is to suggest that they have nothing to do with ‘real’ Christianity” (25).

In response to the various communities that the church has violated, there is no place for us to try and simply separate our faith from historic religion. The first half of van Steenwyk’s book asks us to sit with past and present realities of the church’s expression of empire and imperialism. Then he asks that we do the ongoing work of repentance (not rejection, it as with Cavey).

Van Steenwyk offers various practices for this repentance. These practices are based upon the notion of encountering a wild God. This leads us to experiment (opening for the possible and unexpected), embrace our creatureliness (seeing our broader connections to each other and the world), and silence (clearing ourselves of what is not God).

As we seek this God (which often means seeking to be rid of God) we also cultivate the practices of walking with the compassionate Christ. These practices lead us to increased attention to the world around us. It leads us into concrete and local realities, particularly those on the margins which are typically hidden or disparaged.

Beyond the superficial similarities there is indeed overlap in these two books. They both attempt to name and address something that appears to be symptomatically wrong with Christianity. They both call for significant change (subversion as their subtitles suggest) and a radical openness to God. And for this reason we need to be very careful for the differences can easily be lost.

Cavey promotes a sort of transcendent or cosmic Christ untainted by the structures we must constantly navigate in the work of repentance, healing, and celebration. To be crass, this sort of Gospel works well for white people trying to atone for their guilt. For van Steenwyk there can be no escape from the material and social realities around us, for good or ill.

There is no salvation outside the margins; outside our vigilant attention to the places of suffering under domination. To be sure, van Steenwyk is also a white guy looking for salvation. I just think he suggests a better path. David Driedger is Associate Minister at First Mennonite Church in Winnipeg, MB. He writes occasionally for the de-scribe and facilitates a monthly reading group engaged in theology and critical theory