With Spirit and Body and Being – Shut it Down! 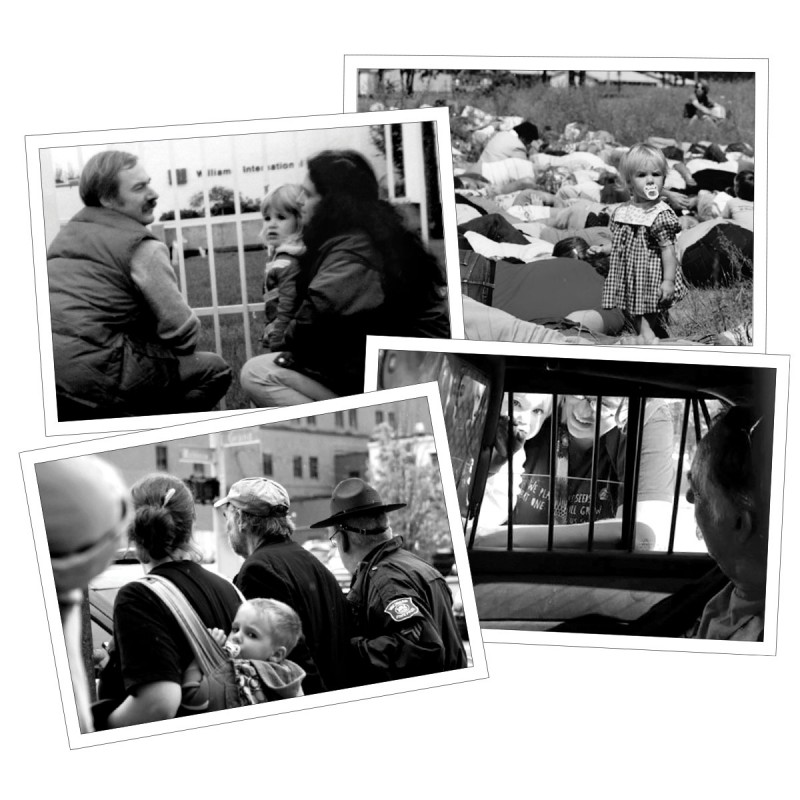 My rap sheet is the longest from the time I was in utero to 3 years old. My parents fell in love reading hand-written love letters delivered by guards between jail cells. When my sister and I were born, their direct actions didn’t stop, so we came to jail with them. The guards would pass us between cells. Nowadays, I am quite certain they would have called Child Protective Services.

In the last 15 years, I’ve found my communication and organizational skills most helpful on the outside. I can set up a mean support system – organizing nonviolence trainings, tracking phone numbers and bail money, liasoning with police and lawyers, and making sure there are snacks when everyone is released.

I’ve done two big rounds of support in the last few years, first around the Detroit water shut-offs and more recently with the Michigan Poor People’s Campaign. Each season, I had a toddler strapped to my back whom I held up against police car windows to wave goodbye to their grandparents. Both of my children learned what silence means by sitting through trials in court rooms. There is no question that this is intergenerational, family work.

But there is also no question that civil disobedience involves complicated, messy questions worth struggling over. I often see gender imbalances between the appreciation for those in support roles and those who “took the risk.” Arrests can become places for ego and white saviour mentality to permeate movement spaces. And perhaps most wrenching are the questions around race and the criminal justice system. People of colour putting their bodies on the line face higher threats, violence, and consequences by the system.

Breaking the law is not a choice that everyone can or should make. In everything we do, we have to trust one another in our personal discernment for how we each join in the struggle. Justice needs warriors from every angle, with every skill, and with hearts full of love and courage.

However, one thing is clearer than ever. We are living in death-dealing, terrifying times. War-making, climate-destroying, human-breaking machines are wounding our souls and our planet. And it is time for all of us to take greater risks – to put our bodies on the line, to be willing to accept the consequences, in order to resist and disrupt the systems of power.

It is time to shut it down. Time to rise up and join with community and ancestors. With spirit and body and being, it is time to stand against death with everything we’ve got, and by doing so choose life.

Lydia Wylie-Kellermann is editor of Geez magazine and lives in Detroit, Michigan. You can reach her at lydia@geezmagazine.org.