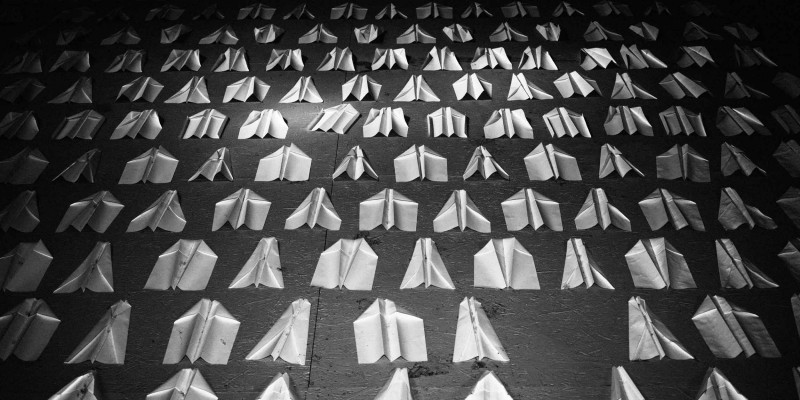 Perhaps one of the most enduring slogans from the Zapatistas is: Another world is possible.

On January 3, 2000, the Zapatistas, a left-wing Indigenous peoples’ movement, launched its air force in an attack against the federal barracks of the Mexican Army in Amador Hernandez, Chiapas. Some of these planes manoeuvred gracefully into military dormitories, some crashed directly into bushes and vegetation, and others barely made it over the barbed wire fence of the base before crashing into the ground. As the Zapatistas saw it, the Mexican military was encroaching on their land, and they intended to make it known that the military was not welcome.

Instead of aluminum, steel, or plastic, however, the Zapatista air force was crafted entirely from paper. The Zapatistas had crafted an entire squadron of Kamikaze paper planes to make a one-way trip over the barbed wire fence of a Mexican Airforce base. And instead of dropping bombs or launching missiles, the Zapatista airforce dropped messages to convince the soldiers in the barracks that they were on the wrong side of the fence.

Soldiers, we know that poverty has made you sell your lives and souls. I also am poor, as are millions. But you are worse off, for defending our exploiter.

These planes delivered a moral payload to the soldiers on the base.

We do not sell our lives, the message continued. We want to free our lives and those of your children, your lives, and those of your wives, your brothers and sisters, your uncles and aunts, fathers and mothers, and the lives of millions of poor exploited Mexicans. We want to free their lives also so that soldiers do not repress their towns by the order of a few thieves.

The first flight of the Zapatista air force was a part of an ongoing push to pressure the Mexican government to withdraw their military from Chiapas. Later in 2001, then-Mexican President Vicente Fox urged the Zapatistas to come to the bargaining table and resume peace negotiations in Chiapas. Yet, Subcomandante Marcos of the Zapatistas exercised a disciplined response. They refused to negotiate until the government closed seven military positions. After continued pressure, President Fox agreed and withdrew the military as the Zapatistas demanded.

This is certainly not the end of the story of the conflict between the Mexican government and the Zapatistas, yet it demonstrates something unique that’s often overlooked. A crafty tactic can be a valuable tool in the struggle for liberation. The Zapatistas hijacked the weapons of their oppressors and turned them into theatrical shows of force and moral strength. This showed their commitment to nonviolence and also offered a different way of confronting and using power altogether.

Perhaps one of the most enduring slogans from the Zapatistas is:
Another world is possible.

To make another world actual, it requires that we do not simply re-create the world with new hegemons but craft a world where we fly paper airplanes rather than jets and drones! Join the struggle yourself! Tear this essay out of your magazine or grab another piece of paper, fold it into the best airplane you can design, and let it fly!

Matt Bernico is a labour organizer and activist in St Louis, Missouri. He also cohosts “The Magnificast” with Dean Dettloff. In preparation for the end of the world, Matt is learning the fine art of paper airplane making, gardening, and cooking.

This article first appeared in Geez magazine Issue 67, Winter 2023, Craft at the End of the World .