The Women Who Remember 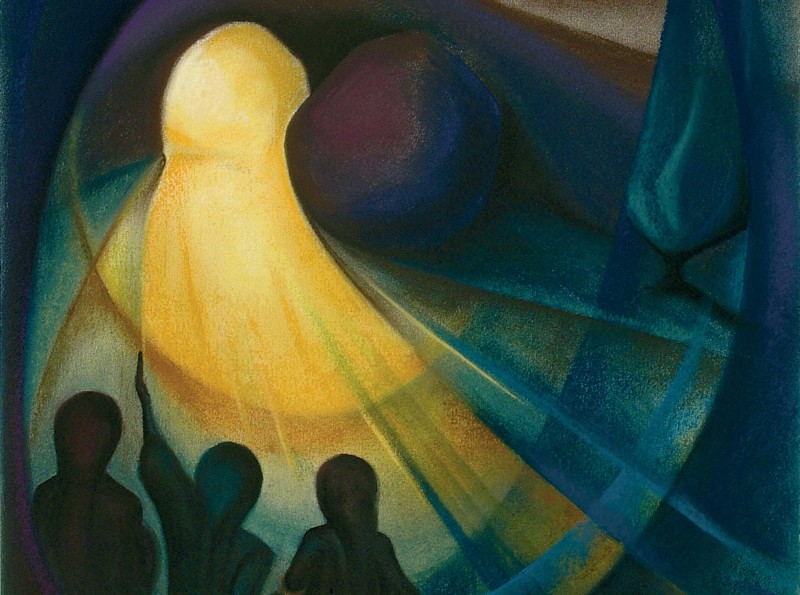 Image credit: Sr. Mary Stephen, Detail of “THE WOMEN COME TO THE TOMB,” 2004, pastel, Size A2, Fourth picture in the “The Way of Light” collection.

Jesus died and was buried. The disciples denied, scattered, and cowered.

The audio is a transcript of the written piece recorded by Kelley Nikondeha for Geez Out Loud.

Geez Out Loud · The Women Who Remember by Kelley Nikondeha, Geez 60: Signs of Dawn

In the aftermath of the crucifixion and all its confusion, the women woke to tend the broken body with burial spices for the final farewell.

“Spices for a criminal,” a man taunted, spitting in disgust. The women kept walking, their lament and love undaunted. When they arrived at the tomb the stone had already been rolled aside. “One less thing to worry about,” Mary sighed.

They entered. They looked left then right for the body. “How do you misplace a body?” Joanna murmured. As they looked about, two men in gleaming garments appeared alongside them in the search with a question of their own: “Why do you look for the living among the dead?”

“He isn’t here. He’s gone ahead to Galilee. Risen!” the two announced. The women, now on the ground in shock and awe, struggled to understand. “Remember what He told you?”

As Luke tells it, the women did remember in the context of the encounter with the messengers. Fragments from various conversations with Jesus converged as they talked in the tomb. “He said ‘On the third day’ – and here we are!” Joanna said to the others, still sitting on the ground. Revelation unfolded as they reminisced and posited not only what Jesus meant, but how to act in light of a resurrected Lord.

“I know the rituals of remembering the dead, but how do I honour a resurrected body?” Mary mused, spices in hand.

“Maybe it means we are not done following Jesus after all,” the other Mary said.

“If He goes to Galilee, then so must we, right?” the youngest one suggested. Mary agreed, “But first we need to tell our fellow disciples and discuss together.”

They found the eleven others cloistered together. The women told them everything about the open tomb, missing body, two messengers, and their initial resurrection thoughts.

“You can’t be serious,” said another to some low-level laughter from the other men.

“This is why women can’t testify in court,” one chided. “Grief overwhelms you – clouds your judgment.”

Peter left the conversation quickly to see for himself. All he found in the tomb were linen strips. He couldn’t imagine what happened, even after the testimony of the women.

Luke makes clear that by the morning’s end the women believe – and the men don’t. Even as fellow disciples of Jesus who travelled together for the better part of three years, the men distrust the account relayed by their sisters. Maybe in all the stress from Gethsemane’s Garden and Golgotha, they defaulted to the pattern of their patriarchal culture where women are considered unreliable witnesses. In the grip of fear and exhaustion, perhaps they forgot the very words and witness of Jesus, who included the women and never treated them like second-class members in God’s Kingdom.

But the women kept meeting and talking about the resurrected Jesus. Some men, like Nicodemus, quietly joined them at night.

In the following days, Jesus appeared to friends walking to Emmaus. He visited the eleven, showing them his wounds. He ate fish with them. Eventually the men believed, too.

After the resurrection, a young boy asked Mary, now an elder in the community, what changed for her at the tomb. “Well, burial spices don’t remind me of death anymore,” she winked. Sitting nearby, Peter the Rock said, “I learned that when a woman tells you Jesus is risen – believe her!”

Kelley Nikondeha is a liberation theologian, author, and community development practitioner in Burundi. She is author of Defiant: What the Women of Exodus Teach Us about Freedom and Adopted: The Sacrament of Belonging in a Fractured World.