The Trees are on Our Side 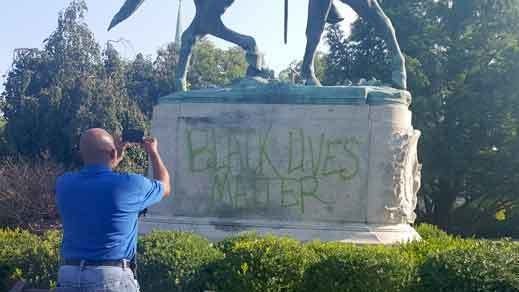 Geez Press, Inc · The Trees are on Our Side by Grace Aheron, Geez 57: CO2conspirators, Communing with Trees
^Grace Aheron reads her piece as part of Geez Out Loud. The audio is an exact reading of the written article.

The cypresses exult over you, the cedars of Lebanon, saying,
‘Since you were laid low, no one comes to cut us down.’
– Isaiah 14:8

On August 12, 2017, the largest white supremacist gathering in the last 50 years occured in the streets of Charlottesville, Virginia – my home. For many white people, that day was a revealing of the ugly, shuddering underside of this country’s normally “palatable” racism. For many Black folks and people of colour, it was a concentrated version of daily realities.

That day, I stood with my fists clenched, watching the 700 ralliers march past me based on ideology or some perceived kinship: the KKK, swastika-wearing Hitler saluters, military men, Southern pride promoters, protectors of the Constitution. Some wore button-downs and sports coats, others wore green and tan Army fatigues, and others yet wore matching t-shirts that I assume were made special for the occasion. I watched with my friends on the curb of High Street as the marchers moved past us, cheering like some victory had occurred.

The hours before were a chaotic blur: the August heat, projectiles flying through the crowd, the sting of pepper spray, bloodied faces, American flags, and the flash of press cameras. The rally began in the morning in Lee Park beneath the behemoth statue of General Lee on his horse – the statue that was the lightning rod for the entire rally – and spilled into the surrounding streets over the course of a few hours.

While I bore witness to the marchers, another presence stood still and took it all in. At the southeast corner of the park, a 93-year-old American Basswood tree rose out of the earth. It was planted in 1924 and is the only remaining tree in the original landscaping of the park. That tree, along with the statue that it dwarfs, was placed into the earth 59 years after the South lost the Civil War. Tree and statue, both tributes to the Confederate General from admirers in his home state.

American Basswoods are known for their leafy, heart-shaped foliage and fragrant blossoms. Small, waxy flowers hang in clusters and open in June at the first heavy breaths of summer in the South. The seeds of the tree attract songbirds and blue birds to its branches. Basswoods are often chosen for parks because of the shade provided by their dense canopy. One can imagine a nice afternoon on a blanket under this tree with bird song and fragrant blooms and General Lee’s looming presence. The designers of Lee Park made sure to choose plant specimens that would amplify a pleasant experience for visitors. I don’t blame the tree.

The statue and the tree have faced each other for over 93 years. One iron and concrete and static; the other supple, changing, responsive. The tree eventually outgrew the statue, standing watch over all who visited the park: those who gathered in admiration of Lee’s legacy; those who passed by unnoticing; and those who shuddered in the statue’s powerful shadow – a reminder of our country’s racist violence. The tree saw it all.

Arborists call the Lee Park basswood a miracle. Despite internal rot in its trunk, the tree is still quite healthy. Growing, even. Reaching, taller and taller. This is how I know the tree is on our side. If trees could stare, this one would be locking its gaze straight into the face of General Lee, daring him to outlive it.

When 15-year-old Zyanha Bryant held a press conference beneath the Basswood’s mighty gaze calling for the removal of the statue, legislation for its eviction began. Violent backlash followed. After four years of battles in the courts and in the streets, it would seem that General Lee really is going to come down. Maybe the tree will finally let itself go, its century-long watch coming to a close. Or maybe it has more it needs to see.