The Tree of Heaven 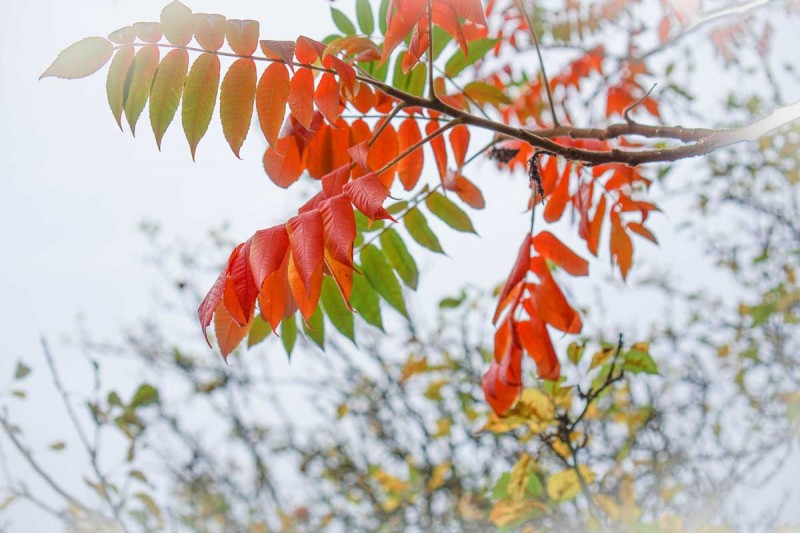 In 1963, the radical Catholic activist Dorothy Day published a little book reflecting on the work of her community called Loaves and Fishes.

She wanted to write down the story of the Catholic Worker Movement – the birth of the newspaper, the Depression-era hospitality houses in New York, the back-to-the-farm movement. She starts the book setting herself in the scene:

It is a joy to me to sit in front of the window and write in this way, in my little two-room apartment on Ludlow Street. This is in an old slum section of New York (the Lower East Side) which is not yet being boarded up or demolished. The day is very hot, but my windows, facing east, look out on a backyard with a bare tree, an ailanthus tree – the tree of heaven . . . yes it is a joy to write in these surroundings.

I might have skipped over this passage in years past, greedy to get to the stories of pain and poverty and suffering and activism, but now, it makes me sit up in my chair. I know exactly what tree Dorothy Day was looking at in her backyard, over half a century ago. I know this tree – intimately – because one towers over my front yard, blocking my view of the rest of the street. This tree is entangled with my desire to be rooted and planted in my space, to partake in hospitality, and to shade and shelter others from the storm of a brutal economic market. It has also shown me the complexities of life: how good intentions can grow up and away from us and how newcomers and outsiders can end up doing more harm than good. The story of the tree of heaven is a complicated one, just like my own.

We had been living in one of the most infamous apartment complexes in our city – a place the police joked about and that attracted buses full of evangelists in the summer. We loved our neighbours and our place so we bought a house around the corner in order to cement our relationship to it. We had never owned anything before, and it felt strange. We went from four people crammed into 75 square metres (800 square feet) with a baby sleeping in a closet and a couch that converted into a bed, to a three-bedroom house with green grass and a towering tree in the front yard – the tallest on the block. It kept our house cool in the summer, and I would sit on our concrete front steps in the shade of the morning, drink my coffee, and thank God for it all.

A few weeks after we moved in, our neighbour across the street came over to say hello and asked us to consider chopping down our huge, leafy tree. I was surprised by his request, but he explained it was a neighbourhood nuisance: this tree put down long-searching roots, tangling up septic tanks and pushing up foundations. He said it was the biggest tree of its kind in the area – probably the original tree of heaven in our neighbourhood – and it was causing big problems. We discovered it would cost at least $1,500 to cut it down, which would leave us with a giant gaping trunk and without shade to shelter us. Broke from buying the house, we didn’t have the money. We said we might cut it down when we could afford it – we wanted to be good neighbours, after all.

After that, whenever I looked out my window or sat in our front yard, my mood was soured. I was grateful for the green and the shade, but in the back of my mind I knew this tree was doing damage. In the spring, the shoots of its roots shot up everywhere: in our brand new raised beds, right by the foundation of our house, in our backyard. They were difficult to pull up and had a particular smell: popcorn? urine? It was hard to say, but if you didn’t wear gloves the smell would linger on your skin for hours and hours.

As I walked our neighbourhood, I saw smaller trees of heaven everywhere, in every direction. They all seemed beautiful, but the thought of each one multiplying, growing, stretching out to become a nightmare of interconnected shoots made me cringe. The ailanthus emits a chemical that causes other trees and plants to suffer. A vivid example of how non-native species become invasive to the point of toxicity, not just because they thrive, but because they shadow and engulf the survival of others. They create a monoculture, destroying the needed and cherished biodiversity of the earth.

Brought to the U.S. in the 1700s, the tree of heaven was admired for how quickly it grew, how it provided shade, and the lack of disease or pest problems associated with it. Planted in later years in places like New York City, they spread quickly and took over. Now, conservatories warn people to stay on top of these specimens because, despite the name, these trees operate more like devils and less like angels.

Dorothy Day may not have known this as she reflected on hospitality in neighbourhoods that were rapidly changing. Looking at her own tree of heaven, she wrote about her old apartment, where the Catholic Worker was born: “All of those old houses are now torn down.” All the original inhabitants – German and Italian immigrants – were scattered. I think about Dorothy, how she was forced to move multiple times, just like her neighbours, because of the spreading roots of capitalism and predatory economic forces. I think about my own community and the boarded up house I saw yesterday, spray-painted with the words Another one bites the dust.

Dorothy often wrote about the worst evils of the world: war, poverty, addiction. She also often wrote about nature: what she could see in her backyard, the fruit trees of her neighbours, and the vegetable gardens people eked out of city balconies. In 1964, on Holy Thursday, she wrote for the Catholic Worker newspaper:

Most certainly, it is easier to believe now that the sun warms us, and we know that buds will appear on the sycamore trees in the wasteland across from the Catholic Worker office, that life will spring out of the dull clods of that littered park across the way. There are wars and rumours of war, poverty and plague, hunger and pain. Still, the sap is rising, again there is the resurrection of spring, God’s continuing promise to us that He is with us always, with His comfort and joy, if we will only ask.

For now, our tree still stands. Perhaps if we ever get some extra money we will cut it down. Our neighbour across the street moved away, and a large family moved in. They like our tree and often stop to chat in the street with us, partly shaded by the leaves. Sometimes I feel tired by my conflicting emotions when I look at my own tree of heaven. And sometimes I feel restored by them. After all, we were never promised an easy life. Instead, we work hard to understand how connected we are to each other, to try and make sense of the ways we can both harm and feed each other.

D.L. Mayfield is an author and neighbour who lives on the outskirts of Portland, Oregon. Her latest book, The Myth of the American Dream: Reflections on Affluence, Autonomy, Safety, and Power, was released in May 2020.