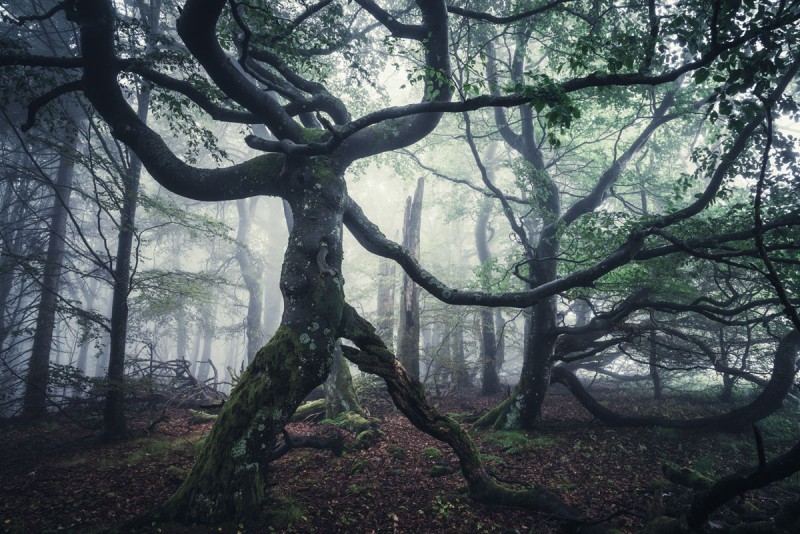 A friend sends me a new article – industrial waste dumped illegally in a provincial park. For not the first time I think, I wish this world had Ents.

Geez Press, Inc · When the Entwives Return by Kyla Neufeld, Geez 57: CO2conspirators, Communing with Trees
^Kyla Neufeld reads her piece as part of Geez Out Loud. The audio is an exact reading of the written article.

Ents are a race of tree shepherds from J.R.R. Tolkien’s The Lord of the Rings. They were created by Yavanna, the Vala (goddess) of green growing things, to defend the forests because she feared her creations would be easily devalued by the other peoples of Middle-earth. In The Two Towers, they rise up against the wizard Saruman and his fortress of Isengard, nature literally overthrowing the fires of industry.

They are also a race in decline. By the time we meet them in The Two Towers, they’ve been in Middle-earth for thousands of years, and there are very few of them left. This is partly because some are growing old, becoming “tree-ish” as Treebeard would say, and others were destroyed by Orcs. But the main reason is because the Entwives are gone.

The Entwives were the Ents’ partners. As Treebeard described them, they were “bent and browned by their labour; their hair parched by the sun to the hue of ripe corn and their cheeks like red apples.” They also tended to the most glorious gardens.

Tolkien had an idea about the “male” and “female” attitudes toward the wild, described in his Letters as “the difference between unpossessive love and gardening.” This idea is represented in the Ents and Entwives. While the Ents wandered the forests and mountains, the Entwives stayed in their gardens:

The Ents loved the great trees, and the wild woods, and the slopes of the high hills. . . but the Entwives gave their minds to the lesser trees, and to the meads in the sunshine beyond the feet of the forest.

The tragedy of the Entwives is that they may very well be gone forever. Treebeard tells Merry and Pippin that the Ents lost the Entwives, but he also mentions that the lands they tended to were destroyed by “the war between Sauron and the Men of the Sea [Númenor].”

For the Ents, this means that they have no way to create a new generation. But for us, I wonder if there’s a greater lesson here: the loss of those things the Ents thought were “lesser,” the knowledge of gardens and of tending the home.

In August 2019, wildfires tore through the Amazon Rainforest in Brazil. A few months later, bushfires blazed in Australia.

These fires quickly drew media attention. World leaders, including Canadian Prime Minister Justin Trudeau, used the Amazon wildfires to call for more environmental protections. When the Australia fires caught, news outlets circulated reports of the millions of animal lives lost and photos of people waiting for safety in boats under a sky black from smoke.

The media attention was not unwarranted. These fires were unprecedented after all, and indicated the dispiriting trajectory of our global forests if climate change levels continue to rise.

But focusing all our attention on the global stage isn’t always the best course. In his article, “The Axis and the Sycamore” for Orion Magazine, Paul Kingsnorth introduces the idea of the Axial Age, “a period of collapse from which emerged new ways of seeing and being.” He proposes that humanity is in a second Axial Age brought on by globalization and corporate power. In the wake of mass destruction, we are starting to ask questions – but the wrong ones:

When we contemplate these changes and these threats, we tend to revert to certain ways of speaking. . . We talk about parts per million of carbon and we talk about our responsibilities to future generations. This kind of talk is easy; it is expected. But I have come to believe that it is largely useless, and not just because nobody is really listening. It is useless because it does not get anywhere near the heart of the matter.

Trudeau may have called for more environmental protections, but many Canadians question his commitment to the environment because he is also willing to approve pipelines. In North America, it’s easy to pay lip service to tragedy when it’s an ocean away. It’s easy to donate money to relief efforts and then turn our attention to something else. I don’t mean to belittle the important work that relief and development organizations perform on a daily basis, but there’s a difference between calling for action in the midst of catastrophe and actively taking steps to prevent it before it’s too late.

The Ents discovered what it was like to be too late when they lost the Entwives. They were content to visit the Entwives when it suited them, until one day all they found was a desert. But even then they didn’t act. The Ents searched for the Entwives, but returned to their forests when their searches were fruitless.

In The Lord of the Rings, the Ents wait until the threat of destruction is at their doorstep to act. It is only when they realize that Saruman won’t stop cutting down their forests that they march to Isengard in a final attempt to affect some change in their world.

If we’re asking the wrong questions, what are the right ones? Kingsnorth thinks these questions aren’t of politics or economics, but of what has meaning and what really matters:

They will be stories of returning to the earth, of understanding our true place in the great maelstrom of the universe, not as gods now but as family members.

Family members. Not employers and employees, not politicians and constituents, not world leaders and estranged neighbours, but families who take care of each other in the midst of hardship.

Winnipeg’s urban forest is no stranger to hardships. We have the largest urban elm population in North America; of the eight million trees that make up our canopy, about 30 percent are elm. For as long as I can remember, Winnipeg has erected signs warning against burning elm wood because elms are extremely susceptible to Dutch Elm Disease. Our other trees also face Black Knot and cankerworms in the summer. In 2017, Emerald Ash Borers were found in Winnipeg, which could decimate our sizable ash population over the next decade.

The city does an admirable job of maintaining the canopy and combating the threats. In September 2019, our mayor announced the Million Tree Challenge to plant one million trees in Winnipeg over the next two decades. But much of the support for our trees comes right from the community. Trees Winnipeg is a volunteer-run, non-profit organization that promotes our urban forest through programs, events, and education. It offers a project called the ReLeaf Tree Planting Program, through which residents can purchase trees at low cost. Residents can then attend a workshop led by an arborist to learn about how to properly plant and care for their trees.

I think this is what Kingsnorth means, and what the Ents were missing: our questions of how to care for our world and mitigate the growing number of disasters don’t mean anything if all we do is speak platitudes to faraway efforts. We need what the Entwives had: strong communities that worked together to create something beautiful.

In her essay, “This is Winnipeg’s Urban Forest,” Winnipeg poet Ariel Gordon says:

We won’t have the arcing canopy of elms again once they’re gone. . . but I have hope. I have hope that the urban forest my daughter lives under will be more diverse, that her generation of Winnipeggers will have even more trees per capita than we do, that they’ll love those trees as fiercely as mine does.

We need both: genuine conversations sparked by global catastrophe and the community-led efforts. Maybe then the Entwives can return, and they can help us build gardens with fruit and flowers and family for everyone.

Kyla Neufeld is a poet, writer, and former managing editor of Geez magazine. She lives in Winnipeg, Manitoba, Treaty 1 Territory.