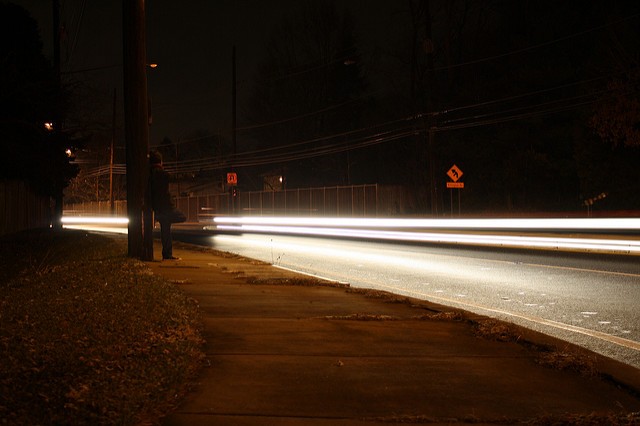 How is hitchhiking revolutionary in everyday life? I guess some people might consider it revolutionary. Some might call it revolting.

Some think hitchhikers are revolting. I don’t know how many times my rides have told me,”You know why I picked you up? Because you look like you don’t smell bad.”

So I started taking notice, and it’s true! Some of them do look like they smell bad. I was in a motorhome once, in the back (it’s like a living room) with another hitchhiker. Some people do that. They get on a roll and keep loading us up like a bus. The driver was from Tasmania, and his wife from Vietnam. Nice middle class couple. Anyway, my fellow hitchhiker’s feet were reeking. As the elder hitchhiker (I’m 53), I felt it was my duty to tell him, and, to show respect for our hosts, that he should put his boots on. Not to mention, I was getting the worst of it. He complied. He was young. He had a teddy bear.

But it works both ways. I was in southern Alberta and an older guy in a pickup pulls up. After some preliminaries I find out he’s a pig farmer. I also find out he smells pretty bad. Despite this, his reason for picking me up was that I didn’t look like I smelled bad.

How is this like a revolution? It’s kind of illegal, isn’t it? Well, it depends. On most highways and roads it’s allowed, but certain roads don’t have much of a shoulder for pulling over, so it can be a hazard. The locals don’t worry about that, though; they just stop in the middle of the road. Cities and towns have bylaws making it illegal.

I was in East St. Paul, just outside of Winnipeg, when a police car pulled up. At some point in our conversation he pulled out his binder, put it on the hood of the car and opened it up to the page. It read something like “… shall not solicit a ride while standing on the shoulder…” So he said, with a slightly surreptitious look, “As long as you’re off the shoulder you’re OK.” What a great cop, I thought. Not only that, he gave me a ride just outside his jurisdiction, a few kilometres away, which is a better spot, just past an intersection with lights. But when I was in the back of the car I noticed there are no door handles, locks or window roll downs, and bullet proof plexiglass between him and I. I was locked in. I didn’t like this. Maybe I should consider armchair revolutions. Anyway, next time (this is a regular route for me) I walk the extra few kilometres to this new, good spot.

All’s well until I get to the bridge over the floodway. No pedestrian/cyclist rights here. Rail on one side, three feet over, traffic speeding by at 100 kilometres per hour. No way I’m doing that again. But for future reference I take note of how wide the water is. Maybe I can make some sort of bridge. Ridiculous. The next time I’m back where I started, except a little farther down the road, and before that damn bridge. But now, with this new legal knowledge, I stand on the shoulder, so people can see me, and I only stick out my thumb when I’m off the shoulder. It’s no big crime. It’s mainly for traffic safety.

Haphazard
I give you all these potentially irrelevant details, dear reader, so that you who haven’t hitchhiked (or have very little) can experience, as much as possible, the feeling of the haphazard situations that arise in a hitchhiking microcosm. (Is the macrocosm of life any less haphazard?) You who are in the “over 100 rides club” could probably write your own article, or a book, like one of my rides. I got picked up in Falcon Lake, Manitoba, at a grade A spot where vehicles do a loop to get on the highway, and can see me from a distance while driving at slow speeds. There’s a scenery of trees to contemplate while waiting. As we chatted and shared hitchhiking stories I mused that I could write a book. He said, “Me too. As a matter of fact, I did!” and gave me a copy. The Canada Chronicles: a Four-Year Hitchhiking Odyssey by Matt Jackson.

Certain highways are illegal, like the main expressway on Vancouver Island. There are signs saying, “Picking up is illegal. Fines up to $2,000,” like littering. But nothing for the hitchhiker! Shouldn’t I at least get aiding and abetting? Confiscate my pack? But I still got rides. I was impressed.

Polarizing
How else is it like a revolution? It’s polarizing. Some people will never hitchhike or pick up. That’s their prerogative. It’s my choice to stand there, no obligation, all’s well. But for some people that’s not enough. They need to go out of their way and give me the finger. This has happened to me a few times, and I’m thankful, since nothing came of it, as it got me thinking. When I glance back at the first time, I went from disbelief (was that for me?) to shock, hurt, fear, anger, violent anger, then back to my senses.

Is this how panhandlers feel (it’s essentially the same thing)? Probably. What about the people who get the finger for less, for the shape of their nose, the frizz of their hair, the beat of their drum? Is this how they would feel? Probably, and more. What about a group of people who get the big finger from another group? From many groups? Many groups backed by institutions, bureaucracy, government, military? Not once but often, regularly, their whole lives? One gigantic finger. Is this how they would feel? Probably, and a whole lot more, I would think.

Then there’s the people who think hitchhiking is the coolest thing. When they pull over, they get out, rearrange stuff to make room, treat me like a guest. “Do you mind if I smoke?” “Don’t mind the mess.” Sometimes it’s downright embarrassing. They give me water, buy me lunch, pray for me, give me money.

It’s kind of dangerous, isn’t it? Sure, but something funny happens, I speculate. Maybe because both parties are aware of the danger, it’s at the forefront. We deal with it somehow. At first greeting I’ve been asked several times, “Are you going to kill me?” I answer, “Um, no. Are you going to kill me?” They usually say no, and we’re good to go. In the macrocosm of life, in a safe sedentary routine, I venture to say that we get complacent and lose our instincts to detect danger. Then we hear things like, “How could this happen in our neighbourhood, church, school?” “He was such a regular guy…”

People pick up hitchhikers for all sorts of reasons; philosophical, altruistic, Christian duty, utilitarian. But there’s another reason. They’re bored. Some people are on the road all the time and just want a break in their routine. At the other end of the spectrum are the ones who are never bored. Kids, intermittent cell phone conversations, work, play. Why not throw a hitchhiker into the mix?

The long hauls are usually for company, but also to stay awake. When I’m not nodding off myself I feel it’s my duty to make good conversation and make the time fly by. Some of my rides hardly talk. I wonder why they even bother picking me up. Don’t they want to know who this stranger in their car is (Maybe they’re plotting on how they’re going to kill me and dispose of the body)? But I’ve also learned not to try too hard to drum up a conversation. At the other end of the spectrum, some people just yak, yak, yak, and I can’t get a word in edgewise. The hitchhiking microcosm: one of the last vestiges for the art of conversation.

I discovered this mode of accommodation like many other things: serendipitously. I was in the vastness of trees, lakes, and rock of northwestern Ontario. Sun setting, I asked my ride if there were any campgrounds coming up. He’s a local. After a bit of discussion he suggested a spot by the lake (Huron, I think). I decided to trust him, and I’m glad I did. In the morning I woke up to the sound of lightly lapping waves on a pebble beach, (relatively) fresh water for my tired feet, and a cool breeze off the lake. Since then, nothing but coyote camping for me. But I learned something else; ask the locals about local things.

It reminded me of a few years earlier when I became a born-again hitchhiker (I hitchhiked in my youth but rediscovered it in my 40s). I was on Denman island, B.C. and got a ride from a retired doctor in an old Mercedes Benz. He showed me a route off the beaten path that goes down to the water, with a big rope to hang onto because it’s steep. At the bottom is a pristine pebble beach where eagles fly. I found an eagle feather that had my name on it.

Social class
Hitchhikers are a subordinate class. Who’s paying for the car, insurance, gas, etc.? Not me. When I’m in Rome I do as Romans. Give to Caesar what is Caesar’s. I got a ride with a trucker once from Regina to Winnipeg. First things first: “No smoking and don’t ask for anything.” I detect he’s given rides to hitchhikers with bad manners before. And there was another rule he didn’t mention—I have to listen to his yarns. So I play my part as the court jester. We part ways; he’s happy, happy, done deal.

But most people aren’t that autocratic. I’ve had quite a range of rides: from rich to poor, Land Rovers to unregistered beaters. Out in the hitchhiking microcosm, social classes generally take back seat. So is hitchhiking a revolutionary act in daily life? Is talking to strangers revolutionary? Trusting people? Learning about our legal system? Taking a risk? Face-to-face contact? If those things are revolutionary, maybe our world is upside down.

Pat Lussier lives in downtown Winnipeg where he ekes a living. He writes and plays music for the Exchange Community Church. Pat finds smudging to be good daily medicine.