Author Doug Coupland argued that when we reach a certain level of technological connectivity we can’t go back. We are lost when we leave our cell phone at home.

When we get our new Smart Phone platform or the latest laptop, our previously enjoyed tech gadgets are now impossible to use, ghosts in the land the living. Updating our status and checking email every 90 seconds changes the way we think and live in the world. Coupland made his argument in last year’s CBC Massey Lecture in Charlottetown, Prince Edward Island.

I have to agree. Since starting this article, I’ve already clicked “sync” four times and visited Facebook once. Connectivity changes who we are.

My relationship with Douglas Coupland goes back to the early ’90s. As the decade began, his Generation X: Tales for an Accelerated Culture was all the rage. If there was a Youtube on the blue screen days of early Internet, there would be viral clips of people pretending to read Generation X. It was a meme before the word was, well, a meme.

Now, I didn’t “get” the book as some older people got it. I was born in 1975 and sit at the tail end of Generation X. But it did explain to me why Kurt Cobain came at absolutely the right moment. Coupland and I sit at the opposite ends of the generation, where the 1973 oil crisis was his cultural epiphany and Cobain’s 1994 suicide was mine. We see our generation differently and experience it in different ways, but he had his finger on something and I decided way back then that there was a cultural shift taking place that I needed to pay attention to.

Mostly, Coupland shaped my experience as a church youth leader in the ’90s. “Engagement” was my buzzword – I suppose it still is as a Christian buzzword today – and my youth ministry was shaped by Coupland’s cultural observations. I engaged, throwing myself into the culture, and I challenged my students to critically engage with their worlds.

So when my natural curiosity drove me to graduate work, it is no surprise I landed at Regent College. Think of it as Canada’s _un_seminary, the ivory-tower-meets-main-street haven for cool, engaged, centre-left evangelicals. In this theologically rich coffee culture Douglas Coupland may well be a hip-pocket saint.

I sat in our first class, an orientation of sorts. The professors gave their challenges to students in order to help shape their Regent experience. Most of it was what I expected: reminders to live in our communities off campus, the values of the school, culture and engagement, earthy spirituality and biblical praxis. And though I knew the school before I went – I had read the books of Regent’s professors and taken distance ed courses to test the waters – I was unprepared for one particular challenge. Professor Paul Stevens, their marketplace ministry guru, challenged us to take a Sabbath day each week.

It was that moment, sitting with 120 of my peers in Regent’s hallowed chapel, that I guffawed.

I laughed out loud. I thought he was joking. Apparently he was not. I know this because nobody else laughed. Instead, dozens of culturally-engaged heads bobbed up and down, drinking in this great wisdom under the green roof, while my ill-timed laugh echoed through the quiet room.

Seriously? A whole day each week without work? Sitting in the orientation that day, I could not imagine pulling it off. I had spent a decade of my professional life running from event to event, fighting for the time to read and write and reflect. As a minister, my Sundays were defined by work, and my days off were frequently filled with catch-up projects. Moreover, I recalled the last time I had gone to school – every waking hour was dedicated to work of one sort or another. Sabbath for me was sleep, or at best, I practiced Len Sweet-styled “radical sabbaticals,” reflecting and resting while waiting for the light to turn green. And that’s not a metaphor: I literally relished prayer time in the 30 seconds I was forced to wait in traffic.

Not wanting to be closed-minded, I decided to give it a try. Like Peter testing the choppy water’s lid, or, in GenX engaged style, like Neo leaping off a virtual roof, I started to rest on Sundays. Pretty soon, the ridiculous became possible. I tried Sabbath-keeping and I found it worked. I was able to do my grad work in the 70 working hours from Monday to Saturday and spent Saturday night and Sunday with my family and friends and church community. It was glorious, really. I was balanced and rested and productive.
Fascinated by my experience, I soon learned that Sabbath was a biblical concept – and not just in the follow-the-Ten-Commandments kind of way. Defined patterns of work and rest are central to how humans are made, and losing ourselves in too much work or too much rest means we lose something of being human. For me to engage authentically in my culture, I needed to put work in its proper place.

Coupland said in an interview, “acceleration is accelerating”; the world isn’t just changing, or changing faster, but changing at an exponential rate. As the first decade of this century hummed along, I found the way we engaged culture had changed so quickly. Generations are shrinking and the demands of technology are shaping us as quickly as we shape new technologies. It is enough to take your breath away. It is enough to make us lose something of our humanity.

Despite Coupland’s certainty that we can’t disengage from technology, I think a new kind of Sabbath keeping is needed. The frenetic pace of the world requires that now, as another generation is born, we must periodically disengage from “connected” culture. I’m not saying we need to become technological iconoclasts, launching into Best Buy and casting to the ground the idolatrous relics of pop culture. Technology serves a purpose, all the plastic and nickel cadmium and ones and zeroes.

But I think that is the point: the technology has been designed to serve us, yet we spend our waking moments serving it – or rather, serving the connectivity it brings. As fully baptized multi-taskers, our obsessive email checking, text messaging and status updates blur the worlds of business and pleasure so that we experience neither the rest nor the work that makes us human. In short, we are really just slaves to culturally demanded neuroses. Or, if not culturally demanded neuroticism, it is, at least, culturally respected.

With all due respect, Doug, bishop of my tech-gen social soul, we need to be the masters of our connectivity, even if it is impossible. I think it is time that we take connectivity Sabbaths, days where we choose not to tweet, or update our status, or check voice mail. It is a radical suggestion, and it will be profoundly disturbing to those on your friends list – or in your contact book, or to your followers – the most frightening symbol of techtatorial connectivity. It will be strange, having the effect of an out-of-place guffaw in a roomful of serious nodding heads.

Douglas Coupland has his finger on the pulse of culture. As that pulse quickens, we need to stop for a breather before we go into cardiac arrest. Ultimately, I’ve discovered the only way I can truly engage, truly connect, is if I turn off the damn phone from time to time. 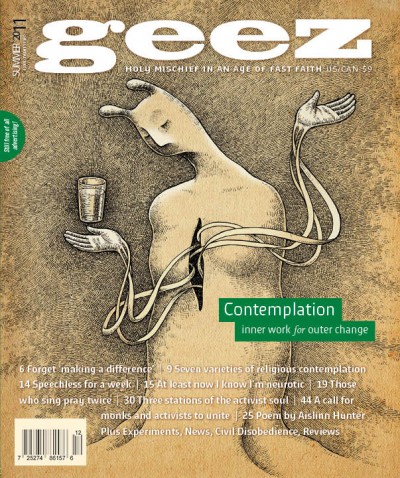