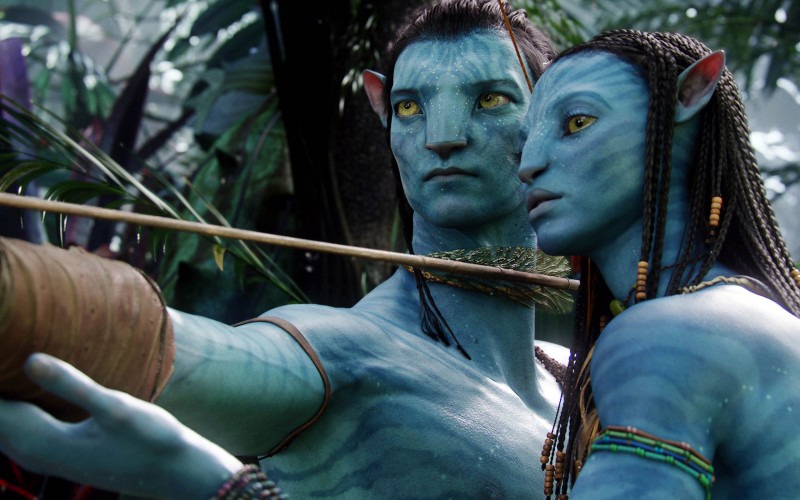 And I mean that in the strictest sense of the word—it inspires awe. Your eyes are glued to the screen because it’s incredibly pretty, and the graphics are magnificent. They’re groundbreaking, at least according to pretty much every media source I’ve heard from. Even my mother loved it. After seeing it, she asked me both how they made the blue people so tall, and how they moved the ears up. I had to tell her she wasn’t looking at actors in makeup, but rather incredibly advanced 3D renderings brought to life with motion-capture cameras.

Yes, Avatar ‘s graphics are awesome, but that’s not why I’ve seen it twice. It’s because I’m addicted to movies that beg me to overanalyze them, and Avatar has so much culturally loaded content that I just had to chew on it repeatedly.

The story, however, is a trick as old as storytelling itself. Take a current conflict, and set it in another time to tell your story in a different light.

In an interview with The Hollywood Reporter, James Cameron stated his movie was a commentary on “culturally advanced” civilizations oppressing more “primitive” civilizations. In Avatar, it’s the earthlings versus the Na’vi, the race of statuesque blue cat people that inhabit the planet of Pandora, where the film is set.

While it’s not said overtly, the bad guys are American (prompting some critics to call the movie anti-American). They are big, they are brash, and they love blowing things up. They prioritize resources over nature, and believe that using force to get the damn natives out of the way is the best way to solve conflict. They’re also mostly white. However, so is our hero, the naive, paraplegic ex-marine Jake Sully (Sam Worthington), chosen to pilot an avatar (a genetic hybrid clone of the human and Na’vi) in place of his late biologist twin brother.

So white people are screwing up the planet (yet again), but it’s also their job to save it. An article on Gawker-owned techy website io9 , titled “When Will White People Stop Making Movies Like ‘Avatar’?” describes the trope displayed not only in Avatar, but in other colonialism revisionist fantasies such as Dances with Wolves, FernGully, and The Last Samurai: “a white guy manages to get himself accepted into a closed society of people of colour and eventually becomes its most awesome member.”

All of the principal characters, with the exception of pilot Trudy (Michelle Rodriguez), are played by white people. Almost all of the Na’vi are played by people of colour, whose non-white faces are never seen in the film. The blue-ness of the Na’vi renders them more “coloured” than any earthly race, and therefore, as that much more of an “ethnic” other, while actual people of colour are erased from view in the movie.

The Na’vi are essentially a cultural mash-up of Western culture’s mainstream understanding of “primitive” people. They’re literally connected to the Earth, in an especially unsubtle way – the Na’vi can actually plug themselves into trees and animals through little tendrils in their hair. They paint their bodies, believe in an Earth Mother, and don’t wear a ton of clothing (although the film’s producers somehow managed to wrangle a PG rating in Canada).

Avatar ‘s colonialism fable takes us on a journey through Jake’s perspective – he begins by siding with the villain, Colonel Quaritch (Stephen Lang), eventually warms himself to Na’vi ways, and manages to lead them in battle against the greedy earthlings, becoming a legendary, and yes, “most awesome possible member” of their tribe. He even integrates himself into his Na’vi body at the end of the film.

Avatar is gorgeous. It’s a fantastic movie, and it’s worth seeing. The fact that it’s making billions and billions of dollars is a testament to its popularity, and the fact that so many people are seeing it makes it culturally relevant. Yet, at its core, it’s all about making white people feel better about their role in colonialism – indulging the belief that if only we could go back, we’d be able to make it all better. However, we can’t, and that legacy of colonialism and the white guilt that comes with it is what makes white people make these movies in the first place.

In Avatar, James Cameron is hoping that this parable will help us love our own planet a little bit more. The fact that his hero essentially saves all the Na’vi from colonialism conveys to our audience that white people have learned a lesson, and really, they won’t do it again. However nice that fantasy may be, it doesn’t mean we’re not living with the consequences of it happening repeatedly in our history. Avatar, in all its cinematic unsubtlety, can challenge the notion that colonialism is a good thing, but it can’t erase the fact that we have to live with it.