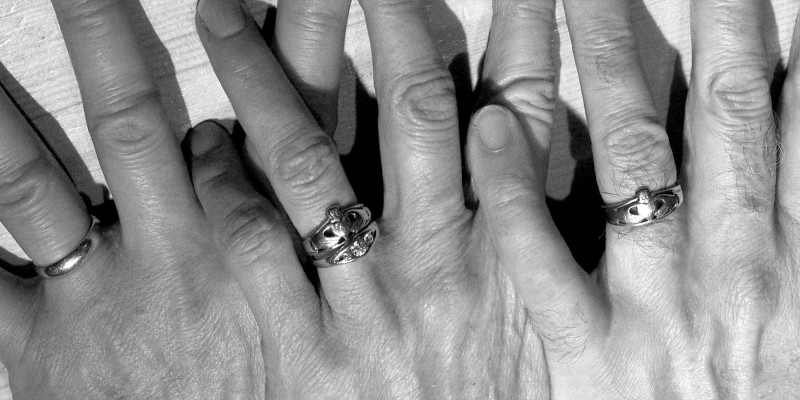 One of them I married in 1995 when we were both evangelical and content to be so. The other one sang at our wedding. I didn’t mean to fall in love again. It was horrifying and very unwelcome. The worldview of serial monogamy and so-called “family values” put me on the proverbial riverbank watching my beloveds drown, demanding that I make a choice and shaming me for thinking the choice was not obvious. I told the world, “Fuck that.” There had to be another way. That was 17 years ago.

Growing up, I was always taught “the system” was good and that my job was to toe the line, be a good girl, don’t rock the boat. As a teen and young adult, I turned myself inside out trying to be “good.” I even saved myself for marriage. Well, mostly – depending where you draw the line. But this – this was my line. I would not, could not choose. I would rather die. And I almost did. The only reason I didn’t die was that neither of my loves asked me to choose. Instead, we worked out new terms for a new relationship model. Is it polyamory? Depends who you ask. If you ask me, I don’t care. What it is, is fierce loyalty. Respectful equality. Sweet forgiveness. Honest fidelity.

Forget toeing the line. I have come to see patriarchal serial monogamy as an insidious part of a broken capitalist system that tears humanity down by playing a zero-sum game. Insidious and evil because it purports to be moral. Following my participation as a subject in the 2015 documentary Conversations After Church, another participant made the astute observation that the board of elders of my evangelical church might actually have known what to do with me if I had left my husband for another man (that being “loving confrontation” and removal from leadership), but the fact that I made it work with both was . . . worse?

Fortunately, hubby and I had already made our exit from the clutches of evangelicalism, so the point was moot. The third partner was simply another plot twist. We (three) unwittingly busted all kinds of myths about traditional marriage wide open: there is no “the one”; three really is company; sex only means what you (all) agree it means; faithfulness is not defined by exclusivity; and the majority must not rule – consensus is the path to all being heard and valued. The very first article I ever read on polyamory contained wisdom that we have made a cornerstone of our home: “There are two determinants of a lasting relationship: holding in sight the value of being together, and how you treat each other. To one or more, doesn’t seem to matter.”

I don’t begrudge anyone their fairytale romance, their storybook wedding, or their eternal honeymoon. Some people are lucky to find “the one.” I don’t go around recommending people have two partners.

Just don’t ask me to choose. I would rather die.

Karen Limbert Rempel (she/her) is a consulting writer and editor living with her partners on inherited property in Treaty 3 territory (southeastern Manitoba), land once fully stewarded and inhabited by the Anishinaabe and Oji-Cree peoples. She gleefully proofreads for Geez when asked.