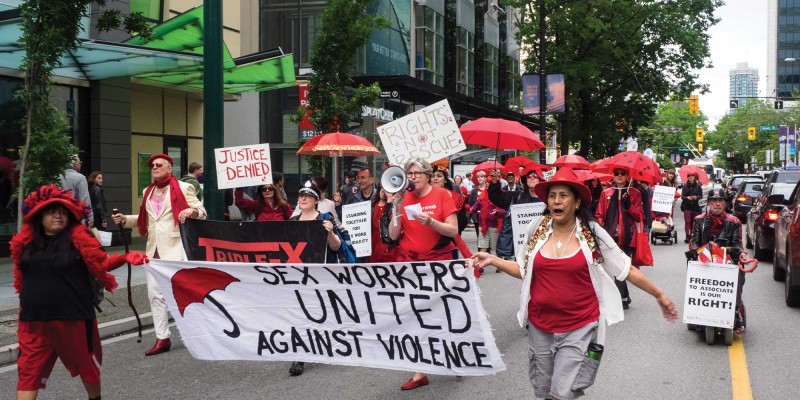 This issue, we interview Marika Rose, a senior lecturer in Philosophical Theology at the University of Winchester.

Her research explores theology, continental philosophy, and a wide range of critical literature exploring Christianity’s complicated role in producing oppressive discourses. More recently, her research has begun to consider sex work and its relationship to how Christians read the Bible, understand the person of Jesus, and engage sex workers today.

As a theologian, what got you interested in the topic of sex work and sex workers?
More than any academic texts, it was being on Twitter, encountering incredibly smart sex worker rights activists like Molly Smith, Juno Mac, and Melissa Gira Grant, and being confronted with the uncomfortable fact that, for a lot of sex workers, Christianity isn’t a source of help or support but a source of danger and violence. There are lots of discussions in Christian circles of the harms caused by purity culture, but it feels like often those critiques only go as far as arguing that we should accept a range of sexual identities and acts that are already acceptable within mainstream Western culture. For me, recognizing the problems with purity culture seems to demand a broader reckoning with questions of theology and sexuality.

The Bible often uses sex work as a derogatory metaphor for being faithful or unfaithful to God. Yet Jesus was known and criticized for spending time with sex workers. What do you make of sex work in light of Jesus’s life and example?
Where the New Testament challenges existing divisions between pure and impure, faithful and unfaithful, it seems to be less about getting rid of those distinctions entirely than it is about replacing one set of distinctions – Jew and Greek, male and female, slave and free – with a new one: Christian and non-Christian.

This question of who is in and who is out – who has had their sins forgiven and who has not – has driven both direct Christian violence towards sex workers and also harmful Christian attempts to “save” sex workers. The women that Matthew places in his list of Jesus’ ancestors were all put at risk by patriarchal norms of sexual respectability, but what they achieved wasn’t so much liberation as survival. What would it mean for us to confront Christianity as something that people have to struggle to survive?

In your book A Theology of Failure, you explored how following Jesus might mean being faithful to some parts of the Christian tradition and betraying other parts of it. What does thinking about sex work and sex workers tell us about this complicated negotiation?

Both the Hebrew Bible and the New Testament seem to view sex workers as threatening because they’re associated with foreignness, impurity, and a threat to patriarchal models of property and inheritance, but both also see the work that is done by sex workers as crucial to the survival of God’s people – whether that’s Tamar acting as a sex worker to get pregnant by her father-in-law and carry on the line of Abrahamic descent, or the sex workers who seem likely to have funded Jesus’ ministry. Sex work indexes broader patterns in Christianity of doing violence to the very people whose hard work has been necessary to the church’s survival. Taking seriously the very messy history of Christianity’s treatment of sex workers can be a good way to confront the entanglement of violence, work, and survival that’s so central to Christian history.

What would it mean for Christians to be in solidarity with sex workers today? Are there any examples that you find interesting or inspiring?
The modern sex workers’ rights movement started in a church. In 1975, sex workers occupied Saint Nizier Church in Lyon to protest against police harassment. It prompted a wave of solidarity protests around the world. Molly Smith tells a beautiful story about local non-sex working women who entered the church alongside the sex working women and dared the police to tell the difference between them.

Then in 1982, Holy Cross Church in King’s Cross, London, was occupied for twelve days, again to protest against police harassment. Selma James, who was the spokesperson for the English Collective of Prostitutes at the time, reports that at first the local vicar was very supportive, and the media coverage they got was positive until, disappointingly, he withdrew his support. Perhaps there are ways to more deliberately make use of the Christian symbolism of holiness and sanctuary that makes church occupations such a powerful image, as a way for those of us who are not sex workers to stand with those of us who are.

On the other hand, Christians have played a key role in the emergence of what Laura Maria Agustin calls “the rescue industry” – an incredibly well-funded network of NGOs whose attempts to “save” sex workers have ignored the complex social and structural reasons people end up selling sex. Focusing on individual “rescue” rather than addressing systemic issues tends to mean exposing sex workers to greater violence, particularly from the police and immigration agencies. A lot of the rhetoric those organizations use draws on social justice language, which often goes unchallenged by other Christians – no one wants to be seen as pro-human trafficking or pro-modern day slavery. But rather than making more ill-advised attempts to “save” sex workers, perhaps one of the most effective forms of solidarity would be to figure out how to stop fellow Christians from making things worse.