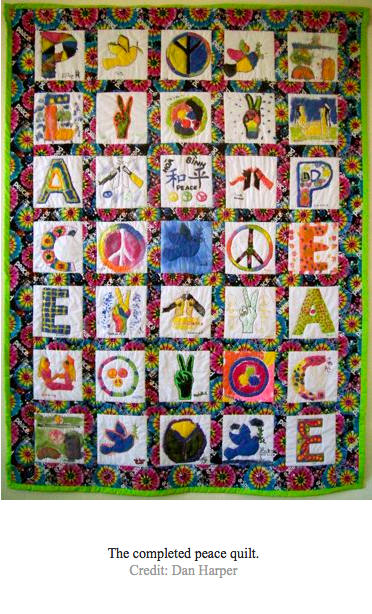 Dan Harper, a long-time peace activist in California, calls the idea of getting more conservative with age “bullshit.” He was a conscientious objector in 1977 and outspoken activist by 1980.

Today he’s the associate minister of religious education at the Unitarian Universalist Church of Palo Alto. Now, however, instead of going to peace rallies, he hangs out with children.

“I really think it’s the way to change the world,” he told Geez from his church in California.

In the spring of 2012, Harper introduced a program for the children of his congregation called the Peace Experiments. Each Sunday began with anti-war reading, like, for example, The Butter Battle Book by Dr. Seuss. Four activities were then offered: non-competitive games, peace sing alongs, baking or quilt-making.

Playing “balloon bump” might not seem like the most revolutionary activity, but something needs to replace toy guns and Call of Duty as go-to hobbies.

Harper said it’s tough to tell if the program will create a lasting change in the kids. But the physical aspect of the activities, such as assembling the peace quilt, was something he believes will stick in the minds of the young participants. Feminist theology, he added, emphasizes that we’re embodied beings, not just brains. The Peace Experiments followed the same idea.

The church will run the two-month program again in 2015.