Occupy and the police full interview 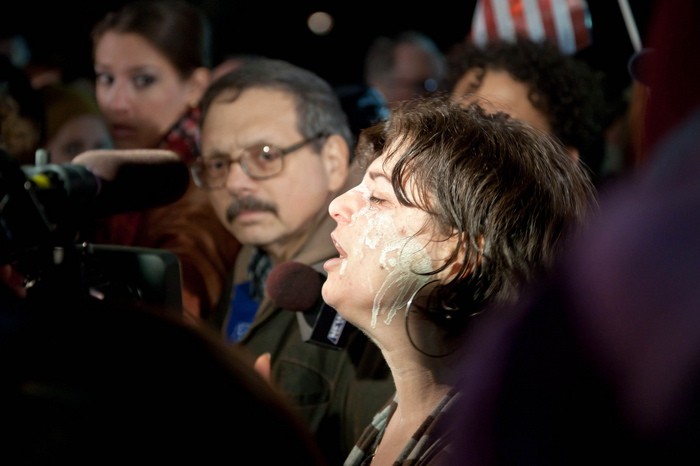 If the protestor is Time magazine’s person of the year for 2011, some may want to nominate those injuring protestors as villains of the year.

In Egypt and Syria, batons and bullets have answered democracy-seeking protestors. The army ended an occupation outside Egypt’s cabinet by beating protestors and setting their tents ablaze.

In the wake of the incident, Peter Moskos wrote “Dumb-Ass Training and the U.C. Davis Pepper Spray Incident: Thoughts From a Former Cop” for the Washington Monthly. In the piece, Moskos argued that police are wrongly trained to have a “hands-off” approach to non-compliance, relying too much on pepper spray, batons and the Taser. Having patrolled the ghettos of Baltimore for three years, Moskos wrote that he and his fellow cops threw out the “hands-off” training in favour of a “hands-on” approach, which deals with non-compliant people by picking them up or walking them away, for example.

Geez interviewed Moskos, now an assistant professor at NYU’s John Jay College of Criminal Justice, to plumb his thoughts further. He was reached by phone on a Greek island, where he is enjoying a writing retreat. [Questions may be paraphrased, but answers are verbatim, though not always in full.] 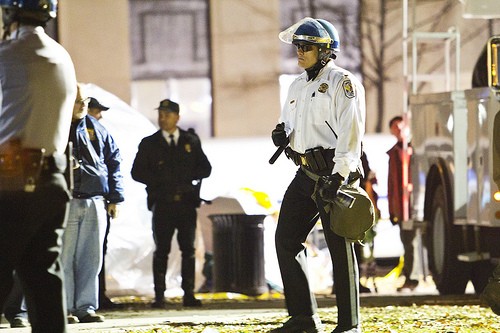 You said in your article police are trained to have a “hands-off” approach, correct?
Generally that’s the desired fashion from higher-ups, and it probably does reduce police officer injury, and there is some basis for that. I mean, every time you scuffle with someone there’s a chance you’re going to fall and hurt your knee or whatever.

Do you think criticism of police over the handling of UC Davis occupiers, along with violent clashes in New York, Oakland, Berkeley, Seattle, etc., will cause Western police forces to rethink their methods for non-compliant protestors?
I don’t know. I hope so. I mean, that’s part of the reason I wrote that. One of my beliefs is that police are, in theory, controlled by the voters. Maybe not directly, but police are under civilian control and that’s the way it should be . . . Radley Balko has written a lot about the militarization of police, but often nobody notices. I don’t want to sound too conspiratorial here, but Taser is a company and so naturally they want to sell their product, and there’s no counterbalance. There’s no anti-Taser company that says “you know, maybe you should think twice about this.” So I think that’s how they’ve, in part, spread. And if you have it you’ll use it . . . you always have to be a little worried when you put stronger or more powerful weapons in the hands of police. The SWAT team is the biggest example of that. There is a need sometimes for a SWAT-like team to do stuff, but if you have a SWAT team then they’re going to start serving warrants, and that wasn’t their original purpose. And then you get “oops, sorry, wrong address” and someone dies or something like that. It happens regularly. And I think all of this gets away from what the real purpose of police is, which is to prevent crime.

Police are typically under civilian control in Western nations, but while civilians may decide to have police remove protestors, don’t the police decide how to do it?
Yes, but that’s where the mayor, and we as voters, can tell them what to do. Yeah, it is a police decision . . . but at some point we have to say “this is how you train? This is the way you think you’re supposed to behave against non-violent, passive resisters? No, that’s no longer acceptable. Don’t do that.” We could tell police that.

Why not just leave protestors alone?
In my travels we saw Occupy Amsterdam and Occupy Dublin, which seemed to be relatively police-free. That’s an option, just do nothing. You don’t have to have a problem. I think in a place like New York that was not quite an option because it was much larger. And at some point, if you do get people whose goal is not to just occupy but it is, you know, the stereotypical sort of anarchist element that really does want to cause trouble, that forces police hands. The other thing about New York was, I mean, you do have to balance. There are some people living and working in stores there who are complaining. You do have to balance the interests of others. Now, maybe you can do a better job of that, but if it’s a small group of occupiers who aren’t really causing trouble, let them stay. From a police standpoint that’s a perfect answer. Another example that may help you form some ideas, do you remember the guy at the Vancouver airport who got killed by a Taser?

Yes, the Polish immigrant [Robert Dziekanski, who died after being Tased by RCMP in 2007].
To me that is a perfect example of an idiotic use of the Taser. They went in there saying “can I Tase him?” There were four officers at least, maybe five or six, and they just pumped the guy. And a Taser is surprisingly safe, most people don’t die, but why is any chance of death acceptable? That man shouldn’t have been dead. They knew he had no weapon. When did cops become so damn wimpy? You got five guys and you can’t grab one old Polish guy? I mean, good God. It’s almost embarrassing that you needed a Taser for that, and he’s dead.
And [a Taser’s] not non-lethal, it’s less lethal. Cops should be trained in that distinction. In the back of your mind you should know that it might kill somebody. – Sean Ledwich

Besides being an ex-cop and a sociology professor, Peter Moskos has authored two books, Cop in the Hood and In Defense of Flogging. He also blogs regularly at copinthehood.com

See the edited version of this article from Geez magazine here.