Jesus Radicals, reflection from a co-founder 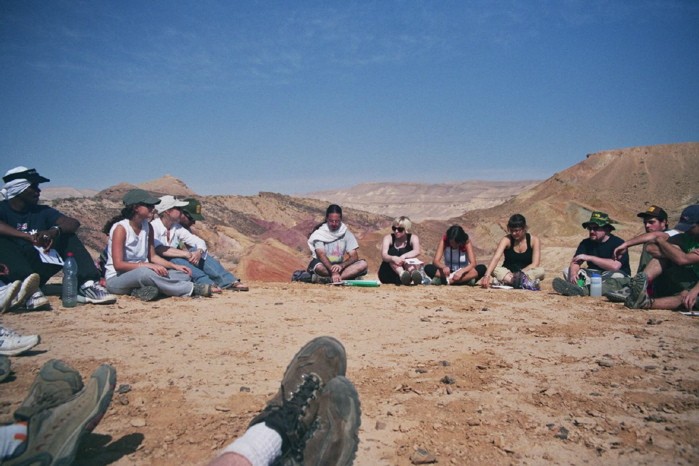 Jesus Radicals, a network for exploring connections between Christianity and anarchism, was not supposed to last this long.

We started in 2000 as a website designed to mark the first group of Wheaton College students going to protests at the School of the Americas in Fort Benning, Georgia. The first anarchism and Christianity gathering in 2003 brought a hodge-podge of people, including Catholic Workers, West Point military academy students, a Black-Panther-turned-anarchist and a speaker from the North Eastern Federation of Anarcho-Communists to a Quaker meeting house in New York City. The event was so planning intense that my partner and co-organizer Andy and I did not expect to do it again.

When I think about the limited scope of our initial intentions – the lack of market research in choosing our name, the user-unfriendliness of our first site and our naïveté about what we were building – it’s hard to believe we’re still here. Yet here we are, with jesusradicals.com receiving thousands of visitors a month and the annual anarchism and Christianity gathering having marked its 10th year.

Our continued existence and the ongoing support we receive are a testament to the energy many people have put into these resources. But more importantly, I believe the survival of Jesus Radicals is an indication of the persistent interest in anarchism as a viable political expression of countercultural Christian witness.

What started as two people seeking to spark a discussion in their local Mennonite congregation has turned into an on- and off-line space that reaches far beyond the U.S. No one predicted the potential impact of this project, nor did we anticipate how the conversations would evolve. But shift and change they have as organizers have deepened our understanding of oppression and expanded our imaginations, and as new people from various social locations have joined and shaped the dialogue.

In the early stages of Jesus Radicals, our focus was exploring Christ’s relationship to the Roman Empire and the overlaps between his ministry, key biblical texts, Christian history and classical anarchist critiques of state power. In retrospect, I think we focussed on these areas to uncover the “anarchic” impulses within our tradition and to show fellow Christians and anarchists alike that we could be committed to Jesus and to anarchist principles and practices.

Our efforts revolved around reclaiming texts like 1 Samuel 8 (the elders of Israel cry for their own king, the prophet Samuel warns that the king will exploit them, that it’s not God’s wish for them, but they fail to listen) and Acts 2 (the first Christians gather, share their property and possessions, give to those in need); telling stories of anarchist Christians like Dorothy Day, Jacques Ellul and Leo Tolstoy; and exploring Christian renewal movements that resisted empire.

Another factor that shaped our early focus was the U.S. political landscape in the wake of September 11, 2001. The hyper-conflation of Church and State as citizen-Christians blessed the nation’s rush to war compelled us to emphasize justice and peacemaking in the face of state-sanctioned violence.

At Jesus Radicals, we still critique the cozy association between Church and State; discuss alternatives to military, prison, policing, capitalism and corporate power; and share stories of individual and communal experiments in reoriented living. But the conversation has gone deeper and expanded. Joining with new comrades has increased our attention to the effects racism, sexism, patriarchy, heterosexism and other oppressions have on our society and our work for social transformation.

Regular contributors have provided more intersectional analysis of a broader range of issues and the podcast we produce has routinely engaged diverse perspectives and voices (see jesusradicals.com/iconocast). An increased awareness of intertwining oppressions now shapes the annual gathering, from our planning model to the topics we choose and the people we invite to speak. These shifts are crucial for fleshing out the interplay between anarchism and Christianity and for clarifying our vision of the up-side-down kingdom in which God invites us to participate.

Just as Jesus calls us to justice, compassion and liberation rooted in love for the Creator and all creatures, anarchism – as Bob Torres describes in Making a Killing – “seeks to challenge domination at all levels of the social order” and calls us to “see struggles as interconnected, and to act appropriately by building alliances and solidarity between them.” Given our socialized blindness to dominating power and privilege, it is essential to continue naming and desconstructing the systemic sins we seek to stand against.

My hopes
Although I am heartened by changes I’ve seen over the past 12 years, I am also acutely aware that the maturation process is far from over. What are my hopes for the future of this network? What other directions might the discussion take?

1. More listening. Although the conversation is becoming more inclusive, the terms of engagement are still frequently set by white-identified heterosexual men who are primarily concerned with the anti-statist, anti-war and anti-capitalist aspects of anarchism. Consequently, we often overlook the particular analyses of anarcha-feminists, Anarchist People of Color, queer anarchists, veganarchists and others. Conversely, our focus on the still small subculture of Christians who identify as anarchists has limited our engagement with radical Christians who do not adopt or who question the anarchist moniker. As a result, we either ignore other Christian liberation perspectives or only listen to their voices sporadically. I believe our anarchism and our Christianity can only become more robust by listening to kindred spirits with openness and discernment. We do not have all the answers, and need ideological elders, peers, strangers and cousins to help us pave the path ahead more clearly.

2. Safer space. We need to do a better job of wrestling with sexuality and liberation, and take more seriously queer communities who share a commitment to radical Christian faith and/or anarchist politics. Although sexual ethics has become a more prevalent topic in our network, the issue remains a source of conflict due to differing interpretations of Scripture; divergent views on the authority of the Bible; theological, sociological and anthropological debates about normative categories; and tensions between anarchist calls for personal autonomy and Christian practices of accountability and community. Still, the discussion has been integral to my personal movement toward a more progressive perspective and is necessary for our communities as a whole. People of all identities and orientations – but especially those who identify as GLBTQ – are affected by a hostile and silencing culture around sexual identity. I hope Jesus Radicals can become a safer space for people with diverse experiences to shape the dialogue and for those of us with gender power and privilege to listen to and be challenged by those we have marginalized.

3. Include other animals. I long to see Christianity and anarchism shed their anthropocentrism and extend their liberating efforts to other animals. An oft-missing piece in our analysis and activism is critiquing and resisting what Richard Ryder has called speciesism, “the widely held belief that the human species is inherently superior to other species” and “the oppressive behaviour, cruelty, prejudice and discrimination that are associated with such a belief.”

This omission allows one of the most obvious and persistent forms of oppression to rage on as human beings dominate, torture, mutilate and kill billions of our creaturely kin. By refusing to factor other animals into our moral imaginations, we fail to see laboratories, industrial farms, slaughterhouses and even humane operations as spaces of domination that need to be confronted and dismantled. By overlooking the connections between speciesism and other forms of oppression, we miss the overlaps between how we treat nonhuman animals and what we do to women, people of colour and other dehumanized communities. By clinging to an image of human distinctiveness that is neither theologically nor scientifically justified, we remain complicit in the widespread bondage of sentient others.

Thankfully, there is a growing roster of people who include animal liberation as part of their Christian and/or anarchist framework: Carol J. Adams, Anthony Nocella II, Layla Abdel Rahim and the Animal Liberation Front come to mind. However, more voices are needed on behalf of the animals we overpower, render defenceless and use to secure human supremacy and desire. (For more on including animal liberation in the resistance to oppression, please see my essay “Animal liberation: the missing piece” at jesusradicals.com.)

As I write this reflection on one small corner of the Christian and anarchist universe, I recognize that I do not speak for all who have embraced each of these identities. There are Christians exploring the viability of anarchism in contexts like Aotearoa/New Zealand, Australia, the Czech Republic, Sweden, Spain, the United Kingdom and other locations beyond my knowledge. I simply offer the perspective of one woman who has been blessed and encouraged to help facilitate and participate in a movement that is bigger than herself, a movement that has the potential to last well into the future.

Nekeisha Alexis-Baker is a Trinidadian-native-turned-New-Yorker who currently calls Elkhart, Indiana home. She is a socially conscious graphic designer for her alma mater, Anabaptist Mennonite Biblical Seminary (AMBS), where she graduated (ironically) with a “Master’s” degree in theological studies. In her daily life, she embodies resistance to hierarchy and dominating power through her vegan practice and advocacy, serving on the anti-racism team at AMBS, cultivating mutually supportive and empowering friendships, and living in interspecies community with her spouse and their carnivore roomies, cats Mocha and Cairo. When she is not fighting The Man, she spends time singing in gospel choirs, dancing and laughing a lot.