Feministry: Nuns refuse to back down 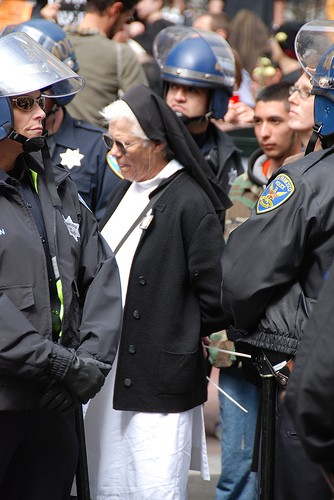 Nun getting arrested in San Francisco at a protest against the Iraq war, 2007.
Credit: Steve Rhodes, http://www.flickr.com/photos/ari/428370654/

After threats from the Vatican to withdraw formal recognition of the Leadership Conference of Women Religious (LCWR) due to their strongly liberal focus on social issues, the U.S. nuns say they are committed to dialogue but will not compromise on their core work.

In an official statement, the LCWR said they “will proceed with these discussions as long as possible, but will reconsider if LCWR is forced to compromise the integrity of its mission.”

In April the Vatican released a report, accusing the nuns of promoting “radical feminism” and acting contrary to the church’s official stance on social issues including abortion, women’s ordination and same-sex marriage. The Vatican charged male archbishop Peter Sartain with overseeing the group and reviewing its activities and official statutes.

Members of the LCWR claim that they are merely following the guidance of the Vatican II Council, which emphasizes social issues, and that they intend to continue their work.

“It’s our church, and we’re not going away,” JoAnne Courneen, a member of Sisters of Mercy in Erie, told the Erie Times-News. “We’re not going to let this distract us from our ministries.”