Echoes of the Green Corn Ceremony 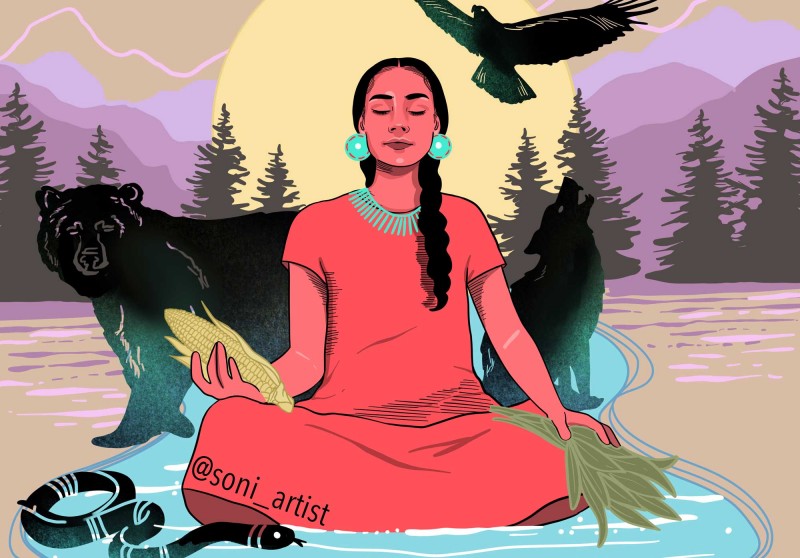 Detail of “Water is Life" by Soni López-Chávez

The water rippled and splashed as the People waded into the Long Man and turned east towards the rising sun.

Holding their hands so that their fingertips touched their breasts, they plunged under the cold water before turning to the north and repeating the ritual. Seven times they did this as they continued to turn counterclockwise towards the cardinal directions until they arose from the waters looking west towards the Darkening Lands. Captured in the waters of the Long Man were the pains, sorrows, and misdeeds of the past year, which flowed from their wet souls toward that land where all must one day walk.

Having completed the ritual, the People – known today as the Cherokees – returned to the town square for a community wide feast. Held each year when the corn ripened, the Green Corn Ceremony was the “most solemn tribal function, a propitiation and expiation for the sins of the past year, an amnesty for public criminals, and a prayer for happiness and prosperity for the year to come” (as noted by the late 19th century anthropologist James Mooney in Myths of the Cherokee). Houses were cleaned in preparation for the festival; broken baskets, tools, and old food storage were tossed out. Fires throughout the land were extinguished and re-lit in a ceremonial gesture of renewal. Disorder and chaos were purged from the land, and balance and harmony were restored.

Echoes of the Cherokee’s Green Corn Ceremony can be found in the ancient Hebrew celebration of the Year of Jubilee when the people of Israel followed instructions in Leviticus 25. Outcasts returned home, debts were forgiven, enslaved people changed their family’s fortune after being freed, the wealthy were given the chance to give away their possessions acquired by greed, and the land rested as people showed gratitude to their non-human relatives.

Both of these festivals, I’m sure, sound strange to the ears of my readers who, like me, grew up surrounded by the dominant culture of American individual hyper-consumption. Though my ancestors were active participants in the Green Corn Ceremony, the yearly custom had disappeared from my family by the time I breathed the air of the land – though others among my tribe have kept up the ritual. My writing of these words to you is a type of personal purification as I seek to learn from both my blood ancestors and my faith ancestors.

Though we may be removed by time and ethnicity from the original people to whom the Creator gave the Green Corn Ceremony and the Year of Jubilee, I feel that the celebrations are still valuable. We need to be reminded just like they did that we belong to a community beyond ourselves. We need to have a check on our own greed and desire to accumulate material things. We need to remember that the land around us is living, breathing, and working to keep up with us. We need a reset in which pains and sorrows of the preceding year fall from our shoulders while mercy and love pour into our hearts, bringing healing to all areas of our lives.

Joshua S. Hopping (Cherokee Nation) lives in Idaho and is the author of The Mystery, the Way, and the Journey.