A Visit with the Metanoia Farmers 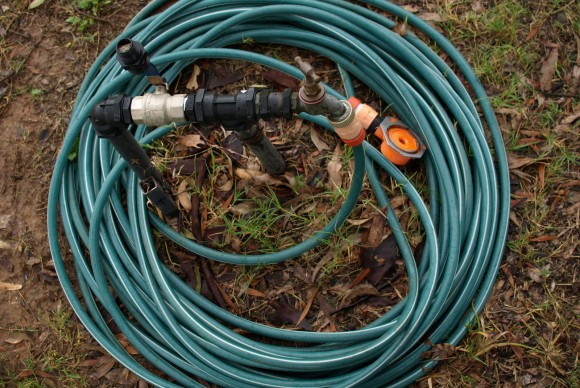 I’m sitting at a picnic table with five farmers. They’ve just finished more than an hour of meetings in the shade of their small, mostly open shack. This was one of their short meetings. We can hear the cars driving past a hundred meters away and the wind through the plants that spread out in three directions from where we sit. We sit amid boxes of produce, blackboards with share lists, hoses, one lonely barbeque, a freshly sliced watermelon, and some garden tools. As we talk, one theme emerges. They have not chosen the easy path for the task at hand. However, they’ve decided the task matters and their path is worthwhile.

These five people make up the Metanoia Farmers Worker Cooperative. Together they provide 70 full-share-equivalents to people in the city of Winnipeg as a part of a Community Shared Agriculture program. Simply put, this means they provide weekly boxes of vegetables for people who have purchased a share in the farm. But it isn’t simple, because they’ve chosen to work together. This cooperative is made up of Marta Bunnett, Megan Klassen-Wiebe, Jonah Langelotz, Jeanette Sivilay, and Anika Reynar, each of whom is a current student or alumni from Canadian Mennonite University.

But, they fully acknowledge that they needn’t do it together. Plenty of people who run CSAs do it on their own or with their family. In fact, Marta Bunnett, one of the newest Metanoia farmers, has. Bunnett spent five years running a CSA in New Brunswick mostly on her own, with help from her immediate family.

“It’s not that we couldn’t do this kind of thing on our own,” says Langelotz, “it’s that this is the way we’ve chosen to do it.” Klassen-Wiebe talks about how we aren’t trained to work together. It’s not convenient. Using consensus to make their decisions means long meetings trying to ensure that everyone’s voices are heard and perspectives are understood. These are good things, but they don’t usually lead to simple meetings.

My arrival at the farm fell at the tail end of one such meeting. I weeded some of the onion patch that sat a little ways away from the shack while I waited for them to finish, and while the meeting did take even longer than they had initially anticipated, I heard laughter from their direction. Their task is not easy, but it’s worth it. They are becoming practiced in relationships.

The focus they put on caring about relationships with another translates into stronger relationships with their sharers as well. They learn to go beyond what is expected of a food provider and make broader connections, not only with the people who have purchased a share in the farm, but with the sharers’ communities as well. They recognize people as they come to pick up shares. Visitors arrive every few minutes during our interview to drop off snacks, chat with the farmers, make a joke, or just say hi. The farmers see people in the streets that they can greet by name because their communities are extending further than they have before.

“Direct relationships shift the power balance,” Langelotz explains, “between us as coworkers, but also between us and our sharers. It becomes less of a transaction.” And that’s part of the goal. We live in a world where the standard privileged grocery-buying experience (mine included) is about individual needs, overabundance, and convenience.

And yes, the guilt that I feel when I go to the grocery store and buy cucumbers from Turkey is a privileged guilt. I am lucky enough to not only have a choice in what food I get, but when, how, and even which grocery store I want to go to. There are millions of people who can’t, and needn’t, feel guilty in the way that I do. But as someone who can care – socially, economically, mentally, and physically – I think it’s necessary that I work at things like this.

When people come to pick up their produce from the Metanoia farmers, they learn what’s in season, how to use different vegetables they may never have heard of before, how plants grow and why the weather conditions matter in which ways. They are more in touch with their food.

The farmers learn how their produce is being used, about the lives of their sharers, and they receive feedback on the shares they’re producing. Each side of the relationship between the farmers and the consumers is humanized.

I do have a choice in exactly what I want when I drive over to the nearest grocery store, that’s for sure. What I don’t have is knowledge about the soil my food comes from, how the land is treated, or who was employed in growing my food. I don’t get to support the people making a difference for a piece of land, and I don’t feel the sense of camaraderie that comes from knowing the farmers who grew my food and talking with other sharers. With this shift that the Metanoia farmers are offering, the focus on the individual is lessening. I don’t get to choose exactly how many of which veggies I want, and that’s okay. What I do get to choose is to support an economic system based on community, rather than individuality.

Say you wanted to join in this movement with me. What can you do?

Buy a share!
The best time to do this is at the beginning of the season when you’ll get as many weeks of vegetables as possible, but some farms will still sell you a share part way through the season if you want. If not, get excited because next summer is right around the corner. Check out a list of Manitoba CSAs here.

Want to read more about collectivity? Geez 43 is all about it. Check it out once it’s released.

Emily Hamm is a summer intern at Geez magazine and lives in Winnipeg, MB. She benefits from CSAs on a weekly basis.