The Work of Our Hands

by Kurt Armstrong | Published 3rd September 2015 in Experiments in Life 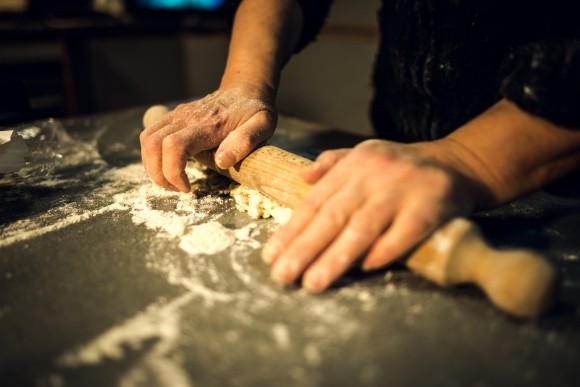 The bruised, black and purple nail on the middle finger of my left hand is almost halfway grown out. I banged it six weeks ago when I was breaking pieces of scrap wood over the edge of my old hand-me-down Rockwell/Beaver table saw. My hand slipped and the cast iron top of my saw proved much tougher than my nail.

A gentle lesson, really, considering the power of the tool. I once sent a three-foot length of two-by-four cartwheeling back past my shoulder as I tried a tricky end cut on a piece of salvaged fir, and it twisted and got pinched between the blade and the fence. Lucky for me I saw it, heard it, and flinched, but never felt it. I did catch a small block of maple straight in the crotch once when I foolishly tried to back the piece of wood out of an incomplete cut. In less than a hundredth of a second, it twisted, jammed, snapped, and shot like a bullet out the back of the saw straight into the tip of my male member. I dropped my pants, expecting splinters, lacerated flesh, and gushing blood, but there were no wounds that I could see.

My friend sold me that saw for fifty bucks, and I’ve been using it for more than six years now. It weighs around 160 pounds, but it’s that thin little two-pound spinning blade that makes it such a fearsome tool. A good, solid table saw like mine is a brilliantly versatile machine – hands down the best fifty bucks I’ve ever spent on a power tool – but to this day, every single time I turn it on I get a bit of a shiver, knowing that if I’m not careful I could lose one, two, three, four fingers in a tenth of a second and good ol’ Rockwell/Beaver wouldn’t even blink an eye. My bruised fingernail is a tangible, and very subtle reminder: respect your tools.

I’ve been sporting my bruised nail with pride because I feel like it makes me look tough. I’ve always felt that tough, hard-working hands are admirable and noble, and I’ve always wished for bigger, tougher-looking hands. My dad’s hands are certainly tough, and they are enormous. His fingers aren’t unusually long, but they’re big like pale smokies; even now his wedding ring rattles loosely on my thumb.

Dad grew up feeding hundreds of square bales to 750 yearlings every morning throughout the winter. Impressive enough on its own, no doubt, but for many of his summers he would have helped move every single one of those 25,000 or so 60-pound bales from the field onto the bale wagon and back to the yard, then helped unload them into straight, tight stacks on the yard. Come snowfall it all went in reverse: pull bales off the stack, load them onto the back of a truck and out into the corrals; cut the twine, then burst the bales of dry, green hay for the hungry bovines. Dad still has forearms the size of men’s calves and biceps like stubby thighs, but it’s those thick, strong hands that have always impressed me.

A friend of mine, a retired professor from grad school, lives out on Galiano Island, one of the gulf islands in the Strait of Georgia off the BC lower mainland. His head is shiny-bald with sprouts of grey hair over his ears, his chin covered in a dense, wiry, grey-black beard, and if he weren’t so well-dressed he would fit right in with Peter Jackson’s band of ferociously strong pilgrim dwarves. He still teaches philosophy, history, and poetry, but he and his wife spend a lot of time minding their few island acres, raising sheep, picking wild mushrooms, and growing a big garden full of potatoes, onions, garlic, tomatoes, basil, beans, peas, and cucumbers.

I noticed his hands in my first month studying with him in a year-long course. I asked and he said he’d stained his hands picking walnuts; the syrupy sap coating on the husks, which was once used for dyes and ink, left a stain on his fingers and palms that lasted for weeks. I envied those stains. Sitting there in that room full of young, bright and brainy academics, all future scholars, writers, leaders, and intellectuals, I wanted hands like that, hands marked by my labour, an abstract biographical narrative written directly on my flesh.

The mark of stories

Of course the storied marks on our bodies aren’t only on our hands, but I’ve been thinking especially about hands lately because a few weeks back my three-year-old daughter, Lucy, got one of her tiny fingers caught in her big sister’s bedroom door. The door pinched her ring-finger against the jamb. It broke the first bone and split the skin right at the first knuckle, then peeled it up over the tip of her finger like a thick, raw sausage casing. Preschoolers scream a lot and Lucy is no different, but there was something in the timbre of her scream that sent my wife, Erika, and I chasing up the two flights of stairs.

We found both our girls standing in the hallway outside the door, the older one, her eyes wide and horrified, holding onto her little sister’s arm while Lucy screamed and stared at the mess as the blood ran down her finger, onto her palm, and over the back of her hand. I carried her down to the bathroom and we ran her finger under cool water, and Erika, who used to be a nurse, said we needed to take her to the hospital. We wrapped her whole hand in a damp towel and Erika drove us to the emergency room while I held my little girl on my lap and whispered and wept as she screamed and writhed.

Erika used to do home-care for men who had had accidents at work, mostly injuries to their hands – a pinkie finger caught between a belt and a pulley; a thumb burnt by 500 volts; fingertips nipped in a hydraulic press. Fingers are absolutely packed with nerves, even more sensitive than genitals. Tests show that fingertips can feel a bump as small as 13 millionths of a millimetre, the size of a small virus, on an otherwise smooth surface. Erika drove to their homes to change wound dressings and often recounted cautionary tales of those tradesmen, whose day-to-day work was hard, manual labour; men who had spent their lives building a demeanour to match the burden of their work; muscular, macho, stereotypical manly men, whimpering and wincing like toddlers, desperately begging my kind, gentle wife to please, please, please be careful, it hurts so bad.

I did my best to play the role of the fearless, courageous dad as I cradled Lucy and Erika drove to the ER at the children’s hospital. When it was finally our turn to see the pediatrician on duty that night, she wound right up like a siren as he pushed the torn skin back down and stuck steri-strips and squeezed hospital-grade crazy glue over the bloody mess to put her together again. After about a week it looked like ratty mix of kindergarten arts-and-crafts and an all-too authentic Dr. Frankenstein finger puppet.

The doctor seemed rattled and shaken as he tried to treat my thrashing, screeching three year-old with a torn-off fingertip. “I’ll do my best,” he said to me as Lucy, too, did her best to hold steady enough for him to do his work, “but she might have a scar.”

“I don’t think that the perfect life is comin’ through without a scratch,” I said, quoting a lyric from my favourite songwriter, Mike Roe. He paused and looked up, the glue on my daughter’s lacerated finger not yet dry.

“You’d be surprised,” he said. “I had to stitch up a bull rider one time, pro cowboy, about 25 or 26 years old. He got bucked off and landed on his back and before he could get up the bull stomped on his forehead and split it wide open. No brain injury though, no skull fracture, not even a concussion, just a long gash across his forehead, which is absolutely amazing when you consider that a bull weighs thousands of pounds. To come through that without getting killed is a miracle, never mind coming through without so much as a concussion, but that poor cowboy cried like a baby because he knew he’d have a scar on his perfect face.”

Bullshit. Not the doctor’s story, but those cowboy’s tears. The airbrushed, perfect skin of Hollywood actors might sell magazines or makeup or lotion, but I want a face that tells stories. Give me the aged, scarred, veined, marked, mottled, lined, leathery, wrinkled, ruddy, freckled, jowled, spotted, worn tones and contours of a just one, warm, real face over all the world’s glamour magazine cover photos any day.

But back to hands for a bit: my wife has strong, motherly hands that have been worked over by 12 years as a nurse and a decade of parenthood. She has never thought too highly of her hands. She says her fingers aren’t the right shape and not slender enough and her palms aren’t as elegant as the hands in magazines and her wrists aren’t as delicate as she might wish. No big scars on them to make for good stories to tell the kids, but when I look at her hands I remember the night 21 years ago when I mustered the courage in that small-town movie theatre to hold her hand for the very first time. I think of the hundreds of times those hands started an IV for one of her patients – too many tries and you can blow a vein, so her co-workers used to get her to help out when they were having trouble. (She used to lust over my veiny hands and ask if she could practice on me. I said no.)

She’s been done with nursing for nearly four years now. Her hands spend most of the time at home these days and they wash the kids hair, wipe their faces, floss their teeth, rub their backs, fold their socks, sign their school notes, make sandwiches with flax bread and grape jelly for their school lunches, sew buttons back onto their jackets, organize their artwork into scrapbooks. In an ongoing battle against entropy, she fashions order out of the inevitable chaos that trails in the wake of three young kids. She is an ex nihilo creator, making kindness and warmth out of nothing. I’ve watched her precise grace when she slices a fresh garden tomato with our sharpest knife, and the power of her body directed into her shoulders, down her arms and her hands as she kneads a huge lump of dough for half-a-dozen loaves of bread. And sometimes it’s like I can feel the whole history of how she has loved me when we’re sitting side-by-side in church and I lean forward and she rests her hand on my back. For me, there is nothing sweeter than that.

And maybe I should apologize; the whole point of this is to try to get in the last word in an ongoing argument because, despite whatever she might tell you, her hands are gorgeous.