by Will Braun | Published 10th August 2011 in Ways of Seeing

This cute-forlorn portrayal of hunger, from WorldVision.ca, is one approach used to depict famine.

The distended belly is back in the news. It’s a shocking sight – a motionless, blank-eyed Somali child with emasculated limbs, a seemingly over-sized head and a swollen abdomen. Or maybe it isn’t shocking.

Closed doors
But others say human suffering must not happen behind closed doors, and photography has particular power to evoke response.

“Far from dulling our senses, photography has been a key component in the creation of what we think of as the modern human-rights consciousness,” writes Susie Linfield in an article reprinted in the Fall 2009 issue of Geez magazine. Linfield, a prof at New York University and a widely published photography critic, admits that human sensitivity is still limited, but she argues that awareness of, and responsiveness to global human need is greater now than it ever has been, and photography deserves some credit.

Linfield says there was no pre-photographic golden age of global compassion that has since been eroded by atrocity photography, as she says the critics imply. 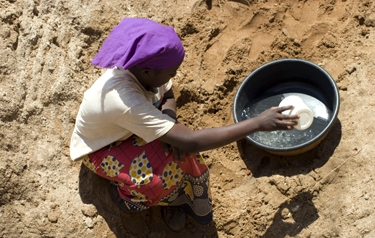 A dignified portrayal of hunger. From mcc.org.

The juxtaposition makes my soul shudder. 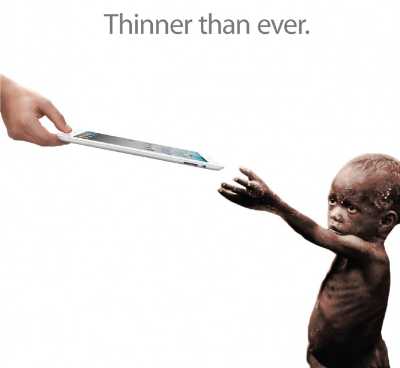 The back cover of Adbusters’ current issue.

Caricatured critique
Also in the politically risque department, last month one of Rupert Murdoch’s British papers, The Times, ran a cartoon showing three caricatured starving African kids with one of them saying, “I’ve had a bellyfull of phone-hacking.” Natasha Elkington reports on her conversation with the cartoonist, Peter Brookes, in a July article on AlertNet (not to be confused with Alternet.org). 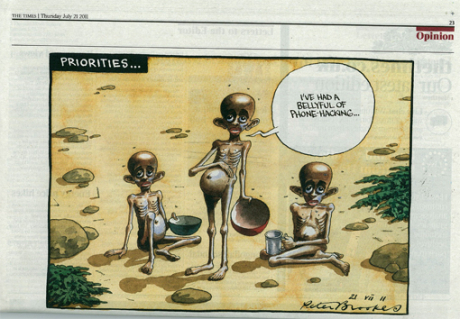 From The Times, owned by Rupert Murdoch’s News Corp. See commentary on AlertNet.

A related Alertnet story, Starvation pornography: How many skinny babies can you show me?, explores the links between the BBC and the Disasters Emergency Committee (DEC), a grouping of major British aid organizations. “If the BBC doesn’t think the crisis is big enough and won’t commit to send its journalists to cover the story, a DEC appeal can’t be launched,” the article says.

Creative, fully tasteful
The folks at Good 50×70 offer another creative, though less brash, approach to visual communication of hunger. Good50×70 is a “social communication project” that enlists hot-shot designers from around the world to create posters related to a variety of social causes. Some of the posters in their 2010 Poverty series provide provocative, sometimes mind-twisting, takes on hunger. 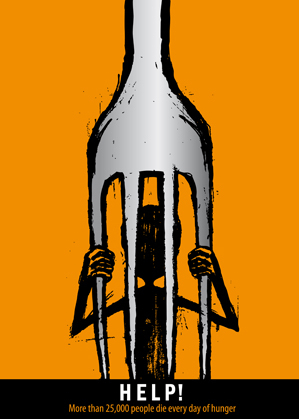 Questions
But, of course, for better or worse, the bloated belly is the signature image of hunger; it’s the famine brand. Though I cannot easily dismiss Susie Linfield’s argument that atrocity photography, despite its imperfections, raises human consciousness, I have found the recent famine photos offensive. I question the intent behind them. I question the ability of viewers (consumers) to see humanity, or the image of God, in these photos. And yet is it not imperative to see?

In such an ethically muddied realm, questions are about all I’m left with: