The art of compassion

See Guerilla Knitting and
more in the Art Digest

Why should Geez magazine dedicate a special issue to art? An obvious answer goes like this: Geez is loosely Christian, God can be known through beautiful art, so do an issue on art, to show people aspects of the divine.

The problem is that beautiful is complicated and not always liberating. Lovely images or provocative art stunts often just reinforce our current sense of reality. We put great works of art on the backs of playing cards. Wonderful public interventions can be reduced to sources of amusement for those absorbed in internet reality.

But there is a side of art which cannot be contained to museum walls or reduced to copies on sale at a store. Fortunately there are artists who pursue an alternative to the two main roles of art: art for art’s sake and art to change the world. The first is overtly apolitical, the second is, well, too heavy to carry us to heaven, or at least convey the sublime. (Alas, there’s a third role of art which occupies too many artists: advertising and marketing.) In the last section of this magazine we’ve created an “art digest” in which we highlighted the work of some of these community-minded artists.

I’m also pleased there are a growing number of critics and academics advocating for art that directly engages our culture, that moves into the community and sees itself as a public project. Two helpful books in this area have been Suzi Gablik’s Conversations Before the End of Time: Dialogues on Art, Life and Spiritual Renewal (Thames and Hudson, 1995), and Carol Becker’s The Subversive Imagination: Artists, Society, and Social Responsibility (Routlege, 1994).

Not enough
This social justice component to art is important, obviously, for us here at Geez. But it’s not enough. There is a cultural aspect which is closely related but more subtle. We talk, create, write, work and play in a culture filled with assumptions of what is good and true. But these cultural assumptions are often wrong.

For example, I’ll pick what I call an obvious cultural flaw: our reliance on the car. We know that our current celebration of car culture cannot be sustained. Yet it is still “normal” (this is in quotes because it can be changed, and it is changing) for us to design houses, neighbourhoods, shopping centres, restaurants, banks, personal schedules and many vacations all around cars. (Yes, this magazine needs cars and trucks to get to the printers, the distributors and to readers’ homes.) Artists can challenge these cultural assumptions by exposing us to new ideas. These are acts of the imagination, motivated by care for the world.

“I’ve really looked hard and long at ways that compassion can become part of our model for art. It has led me not so much to images and icons and the concept of worship, but more toward a kind of activism – not political activism in the sense of demonstrations in the street, but an activism where the artist is engaging actively with, or intervening in, particular situations, and using his or her creativity to create a space for some kind of healing to occur,” writes Gablik.

Artist’s job
Becker says it is an artist’s job to make a problem out of our society because most of us currently see it as un-problematic. For example, artists help us see a world less reliant on cars. This then creates a tension between artists and their audiences (see a brief excerpt on pages 42-43). This is culture work. It is just as important as the agricultural work we featured in the previous issue of Geez.

In addition to the roles of aesthetics, social justice, and cultural work there is an affective role of art that strangely consoles our sense of existential dread. The act of creating something new inspires me. When an artist folds 1,000 napkins for a massive table setting, then crumples each one slightly and kisses it, leaving a lipstick stain, and then aligns them all on a large table like an orderly crowd of people waiting for a blessing, I’m deeply moved. It gives me hope. Strange but true.

See Ghost Bikes and more in the Art Digest

“Within the creative process itself is resistance,” writes Becker. Making art (and I would add craft) is resistance, which I find hopeful because it acknowledges the negative pressures in our society and responds positively. Becker adds, “The sheer act of concentration necessary to produce art resists the diffusion and fragmentation characteristic of postmodern society.” Making art helps overcome a sense of alienation and powerlessness.

This is a religious function, or spiritual development, if you prefer, of the kind that heals communities, provides a vision for the future and restores hope to those in despair.

What’s Christian about this? I rarely ask that question anymore, but others do. My response is intuitive. Jesus touched a sacred dimension and brought it to his followers. He used words like the “kingdom of heaven” or “reign of God,” to describe a socio-economic utopia, where the blind see, the lame walk and the rich have their wealth redistributed. When the sublime confronts the mundane, the mundane doesn’t cower, it rises up and fulfills its potential. God help us – artists help us – see the error of our ways and move towards that aesthetic dimension.

Aiden Enns is the publisher and co-editor of Geez magazine. He lives in Winnipeg, Manitoba. 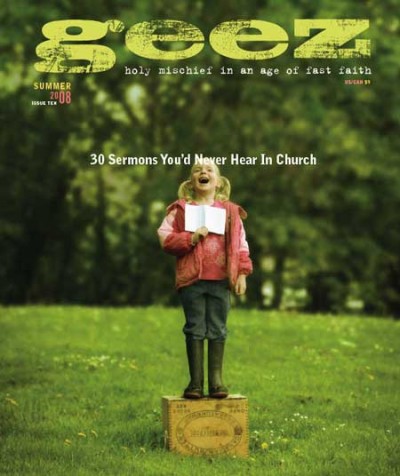