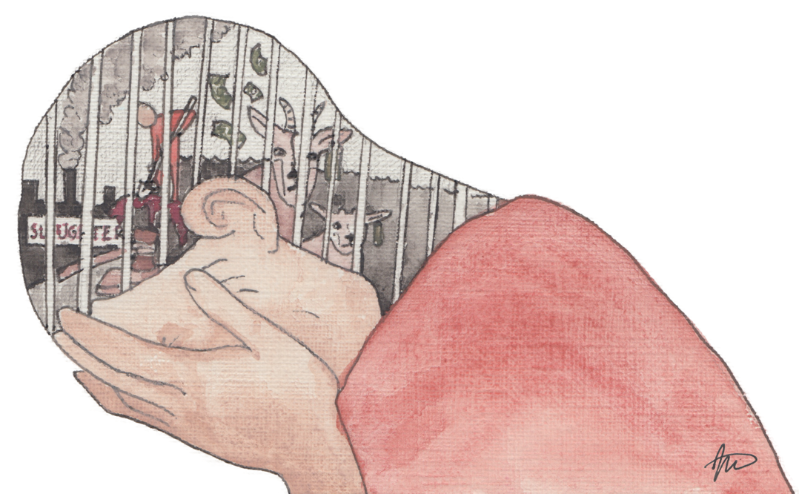 I’ve paused to do some soul searching. I confess that I may have slipped back into my old colonial mindset and succumbed to the temptation to exploit my offenders to advance the interests of the State.

Five years ago, when Canada began the process of restarting federal prison farms, I became a full-time prison farm researcher and activist. The journey began with the excitement of possibility for a healing and therapeutic program. But the realities encountered along the way have filled me with anger. Anger at the correctional system’s endless manifestations of harm, past, and present; at industry sinking its teeth into carceral flesh; at the trauma and suffering filling our prisons to overflowing; and at the Correctional Service of Canada (CSC) for hatching a scandalous plan to exploit prison labour to factory farm goats for commercial purposes while telling the public it’s all for the benefit of prisoners. Geez. Enter the confessional.

I am the Correctional Service of Canada. Bless me, I have sinned.

My job is to ensure public safety through the confinement of offenders (as I like to call them) and to prepare them for eventual release as law-abiding citizens. I care so much about the rehabilitation of offenders (is that an offensive term?) that I’m investing millions (don’t worry, my budget is $2.6 billion, I can afford it) into a prison farm pilot project in Kingston, Ontario.

I confess I’ve made some errors in the past. Truth be told, when it comes to prison farms, I’ve messed up from the start.

The first prison farms in the 1800s were a land grab. Sure, they fed prisons, but the real value was land. By converting useless (OK, Indigenous) land around prisons into useful farmland, the State gained ownership and used incarcerated Indigenous labourers to farm the State’s land and cattle. In the State’s words, teaching settler attitudes toward land, labour, and animals helped to “transform an Indian into a white-man in sentiment.”

(That whole affair embarrasses me now. Gone are the days of treating Indigenous people as second-class offenders. Today, I build healing lodges. I let my Indigenous offenders make dreamcatchers and moccasins, conveniently sold in my catalogue. I’m culturally competent now. It helps that a third of my offenders are Indigenous; I have lots of practice.)

So my farms pumped milk, meat, and eggs into prisons for decades until I had a change of heart and axed them all in 2011 (when Stephen Harper told me to) to make room for improved programs. I explained that offender training needed to be more closely aligned with my vision for transforming federal corrections. Livestock farming doesn’t reflect the “labour market demands of today and of the future,” nor does it address the “needs and realities” of offenders in today’s “urban labour market.”

In Kingston, I replaced my farms with an industrial laundry facility but I made sure to keep my abattoir. Slaughter work, after all, is aligned with the job realities offenders face when re-entering society.

Across the country, I upgraded my old-fashioned farm-to-table food service, replacing it with modernized, industrialized, privatized, standardized, centralized cook-chill food service contracts, saving pennies per prisoner per day. Offenders complain, some riot over it . . . but food freshness and flavour are overrated. My peas may be grey, my milk may be powdered, and my meals may be calorically deficient, but this encourages offenders to work (I pay almost a dollar an hour!) so they can spend their hard-earned nickels and dimes on canteen snacks to round out their diet.

In 2016, five years after the prison farm closures, I had a change of heart again and began the process of bringing prison farms back (because Justin Trudeau told me to). I simply reversed my last media lines to say that prison farms do provide meaningful employment that will support offenders in their reintegration after all.

To align with my vision for transforming corrections, I upgraded my farm model to be equally modernized, industrialized, privatized. The plan, announced in 2018, was to build a state-of-the art facility (spare no expense!) complete with a new and improved manure lagoon where offenders can gain the meaningful experience of farming thousands of goats in a for-profit intensive livestock operation producing 9000 litres of milk per day for commercial sale. To please locals, and to distract – no, diversify, I’m also adding a few dairy cows to be milked for “research quota” (don’t ask me what that means).

Anyway, after three years of failing to get my goats (it’s not as easy as I thought), I’ve had another change of heart. I’m temporarily putting my goat plan on pause. I’m blaming COVID, not the kerfuffle over human rights violations or risk of zoonotic illness, or the 45,000-signature petition to Stop the Prison Industrial Goat Farm, and certainly not the academic report, “Canada’s proposed prison farm program: Why it won’t work and what would work better.”

I’ve paused to do some soul searching. I confess that I may have slipped back into my old colonial mindset and succumbed to the temptation to exploit my offenders to advance the interests of the State.

Perhaps what I need is a new, true change of heart.

Calvin Neufeld is a vegan trans man and social justice advocate from Perth, Ontario. He is the founder of Evolve Our Prison Farms. He is not a spokesperson for the Correctional Service of Canada. The future of prison farms is unknown.