‘Confessions of a Westward Expansionist’ 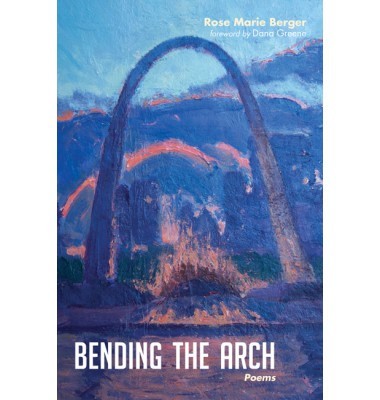 Cover of "Bending the Arch" by Rose Marie Berger, published Jan. 2019 by Wipf and Stock Publishers.

The day after the brutal massacre at Wounded Knee in 1890, there was a blizzard. The snow highlighted the innocence and purity of the victims. However, the whitest of snow could not cover the extent of Indigenous blood.

I recently heard this story told by Rev. Jim Bear Jacobs, and a few days later I found myself stranded under two feet of snow in Northern Paiute land, sitting next to the fire with Rose Marie Berger’s newly released book of poems, Bending the Arch.

Berger, the senior associate editor of Sojourners magazine, fermented this collection of poetry for a quarter century. In 1993, she traveled to St. Louis for a baptism, peering west through the iconic 630-foot Gateway Arch (“bent like a spoon”) all the way to the Pacific. The first thing she saw – directly across the Mississippi from the tallest human-constructed monument in the Western hemisphere – were the remnants of an advanced Indigenous society centuries before Columbus: the Cahokia mounds that “stare dry-eyed, prescient/into the sun.” These people rivaled empires of the East:

While Rome hurled crusaders
at a holy land, we took our own
measure

The beauty and brilliance of these poems sprawls out in their depth and mystery. They call for effort and struggle. They also demand confession and repentance. Berger quotes prolifically from Christian scriptures (“Watershed prophecies/from John the Revelator”), she flavours 19th-century American history with her own family’s homestead story, and she references Mark Twain, Thomas Jefferson, Chief Joseph and contemporary organizer and Bible scholar Ched Myers (to whom she dedicates the third poem). Fortunately, Berger scaffolds the stanzas with endnotes, which I found vital.

The main event of Bending is the epic “Confessions of a Westward Expansionist.” The core of Berger’s confession: “I wasn’t a conscript to civilization/I volunteered.” She owns it, her model prodding “all who serve on the human front/wearing any mask that will get you home.” First, Berger unmasks white settlers on the American continent:

where each one ticks like a bomb/waiting to go off
.. .
where young ones cut their graceful arms . . .
who bathe in fountains at the feet of the generals . . .

However, there is room at the altar for all and sundry: shop clerks at WalMart, hoarders of IRAs and, lastly, the anawim – “refugees from our badly laid foundations of history.” Judgment will not be gavelled from a throne on high, but instead from “the labors and occupations of the past:”

The epic, from start to finish, is soaked in our salvation:

Only ceremony/can season us now . . .
Now is a season for/ceremonies

Christian baptism interrogates our colonial sin. Will we enter abundant life? Will we renounce Satan? Providentially, the baptism of Berger’s godson coincided with a months-long Mississippi flood. Dead steers oat by. Farmland is swallowed up. Si- los and satellite dishes peek above the rising tide. Civilization itself is baptized. Yet, what will happen “when the waters recede?”

Indigenous ceremony, juxtaposed with baptism, can raise us to newness of life. While the head of the child is pushed downwards “towards his false death,” the sweat lodge reveals authentic sorrow: Is this the place where crying begins? The ghost dance centres on the cedar tree, rising up in the midst of pain and death, omnipresent. The sun dance proclaims the buffalo as relative, not resource.

As the snow melts into climate catastrophe, the arch stands as a reminder of the root of the crisis. This fact, as Berger laments, is both “intimate and brutal.” Always the perfect adjectives for our addictions.

Tommy Airey was born and raised on stolen, unceded Acjachemen territory, was transformed by the thin place the Ojibwe, Huron, and Odawa called Wawiiatanong and is transitioning to the sacred flow the Molalla and Paiute named Towarnehiooks. Tommy recently released his first book Descending Like a Dove: Adventures in Decolonizing Evangelical Christianity.