Call me a fence-sitter

In May of this year, five neuroscientists embarked on a week-long hiking and rafting trip down Utah’s San Juan River. The expedition was part vacation, part scientific inquiry.

Its participants wanted to better understand how heavy use of digital devices and other technology impacts our thoughts and behaviour and how taking refuge in nature – far beyond the reach of cellphone towers and 3G networks – might reverse those effects.

New York Times reporter Matt Richtel was along for the paddle, and he divided the scientists into two camps: believers and skeptics. The believers insisted that heavy technology use inhibits deep thought and causes anxiety – and that getting out into nature and even conscientiously logging off in everyday life provides a corrective to that. The skeptics, on the other hand, had no qualms about constant connectedness to their digital gadgets and believed that the resilience and adaptability of our brains protect us against potential information overloads.

The trip was in part prompted by a University of Michigan study that indicated the constant stimulus provided by city living dulls our thinking because the brain’s learning centres are less able to hold things in memory when called on to process information. So, according to the study, a walk in the woods is physiologically better than a walk on a busy city street. The believers extrapolate that conclusion to conclude that heavy multitasking fatigues the brain, draining it of the ability to focus.

The skeptics don’t dispute the Michigan findings, but aren’t convinced there’s any science behind it. One of the skeptics, psychology prof Todd Braver, is quoted by Richtel as arguing: “That’s why they call it vacation. It’s restorative.” He wants to know exactly what’s happening inside the brain and is convinced that our brains might actually adapt to heavy stimulation, thereby improving our multi-tasking abilities. “Right,” adds Art Kramer, another skeptic. “Why wouldn’t the circuits be exercised, in a sense, and we’d get stronger?”

By the end of the trip, everyone agrees that a little downtime can only help make space for uncluttered thinking. But the questions about how technology impacts our brains and our behaviour remain unanswered. Which, for me, reinforces the point that it’s impossible to know what the impact of technology is on our spirits, bodies and communities. Both the skeptics and the believers agree that technology changes the brain, but they don’t agree if it’s for better or worse. And that seems to characterize most of what I read about technology
these days.

The constant bombardment of messages via the web, email, Twitter, Facebook et al. is a distraction that erodes our attention spans and prevents us from being fully present at any given moment. Or, those messages are the bedrock of all that is advantageous about the information age – increased collaboration, openness and connectedness.

Teens are becoming less social because of compulsive texting that prevents them from enjoying authentic interactions with each other. Or, texting is woven into the flow of a whole range of social activities, enhancing relationships because friends are always available to “chat.”

Google is making us dumber because it encourages superficial reading at the cost of deeper knowledge. Or, it’s making us smarter because it gives us unprecedented access to a vast and continually expanding collection of knowledge.

The thing is, either/or polarities are useful as debate constructs, but they tend not to be an accurate indication of reality. I figure the answers to all these claims lie somewhere in the middle. Call me a fence-sitter, but I see merits on all sides of the various arguments.

At the end of the day, we can only guess at the ultimate impact of technology. And when it comes down to it, I’m as leery of the technotopians as I am the technophobes. I find words like “peculiar” and “fascinating” are better descriptors of the brave new digital world than “good” or “bad.”

Personally, my optimal level of connectedness is pretty straightforward: I need to spend just enough time on my laptop and listening to podcasts to have something interesting to say to the readers of Geez. Once I’ve reached that mark, it’s time to unplug.

Nicholas Klassen is a principal at Biro Creative, a former senior editor at Adbusters magazine and a contributing editor to Geez. 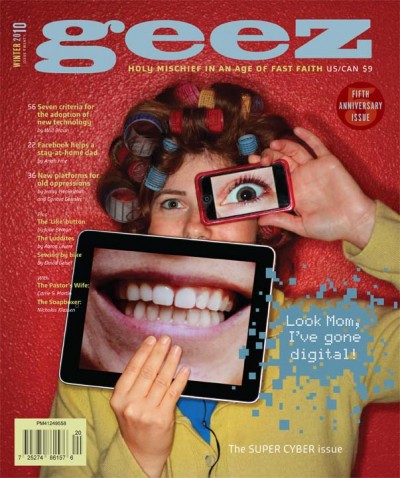