A Curriculum of Backyard Funerals 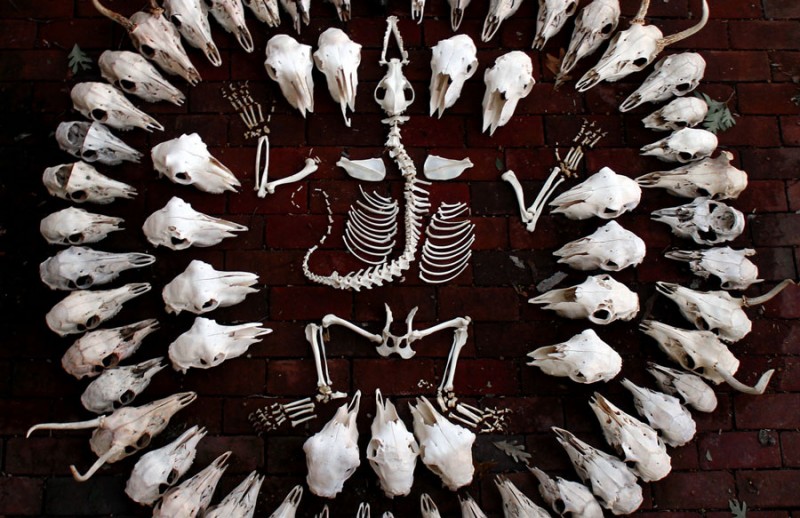 A collection of animal skulls for beauty and natural history study collected by Kristin Hugo in the hills of California. Credit: Kristin Hugo

“It’s okay to go slow,” he says. His four-year-old feet step gently in silence. “That way you can see more things.”

The audio is a transcript of the written piece recorded by Lydia Wylie-Kellermann for Geez Out Loud.

The air is still chilly but the snow has melted. Walking nudges us to take off our sweaters. Below the still-bare branches, wet dirt reveals stories of what has passed in the woods over winter.

Named for this very stretch of land in the thumb of Michigan, my son, Cedar, searches for stories . . . for friends . . . for bones.

All at once, he stumbles on one bone then another and another. A rib, a leg, a jaw . . . a tooth! Who was this creature? A fox? A raccoon? How did they die?

Cedar picks up the bones with awe and love. He holds them and runs his fingers along their smooth edges as if he has never seen anything so beautiful. And then he begins to fill his pockets. These bones will join the many other bones in baskets beside his bed.

When his pockets and arms are full, he looks to my empty, larger pockets for help with the skull and claws. I can’t deny it took me a bit of time to willingly lend my hands and pockets to hold the physical decay and memory of death (not to mention the knowledge that these bones should become nutrients to bugs and soil in this place). But Cedar’s requests are persistent.

I begin to look at Cedar in awe of his ability to see death in these woods as both completely normal and also deeply sacred. He doesn’t appear surprised or shocked by the existence of death and he isn’t afraid to touch it. As we walk, he chatters on about the animals, seamlessly connecting that everything dies. His delight and care seem to honour the creature’s life and end. In this moment, he is teaching me to resist a culture that can’t look at death, and instead reminds me that I, too, can walk with bones.

I wonder what bones this kid will touch as he grows older. One day, I presume (or hope), he will bury my own bones. And as I look out into his future, one that will be so marked by climate catastrophe, I fear there will be too much – too many piles of bones.

Worst case scenario, my children will be walking in the midst of human extinction. While their lives may be different than I can ask or imagine, one thing that seems sure is that they will be witnessing massive death.

So much death stands before us. In a culture so grossed out by dead bodies that we have removed bodies from our parlours and handed them over to a privatized industry of funeral homes, embalming, and indestructible caskets.

So we hold a lot of funerals. There is a little patch in our backyard full of weeds and tulips and a few homemade tombstones. In this fertile ground are composted memories of beloved fish, brutally attacked chickens, stray cats, and a very cuddly rabbit. We can still recall most of their names: Two, Baubee, Three Train, Autumn, Raccoon.

Raccoon, our pet bunny, was perhaps the hardest funeral we’ve held in the backyard. He was a snuggly friend that both boys turned to on their sad days. He died one night when neighbours set off fireworks. Scared to death, mid-jump.

We invited lots of family and neighbours over for this one. We dug the hole and collected peonies and columbine. As if death work was in his own bones, Cedar picked up the body and held him like a baby in his arms. He instinctively started around the circle for everyone to say goodbye and touch his furry, lifeless head one last time. We started singing as Cedar placed Racoon’s body in the hole. I sat beside the grave to be at his eye level, worrying about his heart. He immediately fell into my arms, crying and pounding on my chest. Grief poured out of him with all the rawness of rage and sadness. And then prodded by his older brother, he took that grief in his body and poured it into handful after handful of dirt as he watched his beloved bunny disappear forever.

As a mom, I ached for his heart – so tender and full and in pain. But I also held on to that moment, knowing that this is what I want for who he is and for his touch upon the world. Everything would try to squash this out of him – from whiteness to maleness to cultures of individualism to consumerism. I don’t ever want him to lose sight of life or death, of pain or rage, of body or dirt.

Over the summer, our family biked to the Detroit River. We stood beside that flowing water as elders and mentors and healers and organizers summoned us into communal mourning. We called upon the multitudes of ancestors who had recently crossed over due to pandemics of COVID-19 and racialized police violence. Detroit was hit hard by the coronavirus this spring. The disproportionate effect on people of colour is evident in our lengthy obituaries and communal hearts.

While we stood grounded in that place, my kids ran and climbed and fell into imagined worlds at the edges of the gathering. There is something beautiful about allowing them to be kids, but also having them show up and trust, even on the outskirts of communal ritual, they are being formed by the words and presence. Soon, there was a tugging on my arm. “Come, come.” I didn’t want to step away from the powerful eulogizing, but their pull was insistent.

They led me over to the city’s iconic fountain that had not worked for a long time. “Here, here.” They led me to the corner of the drain where tucked in the cracks was a wing and a leg and a beak. It was a young bird, probably a robin. I doubt it had been noticed by any other person passing.

Death. It fills all our cracks in seen and unseen places. All life is sacred and worthy of gratitude and grief. I rise from the ground to rejoin the circle of mourners. As I walk away, the collector of bones cries out, “Tell Grandpa to come. We need him to pray over the bird.”