The Hope of Gracious Eating 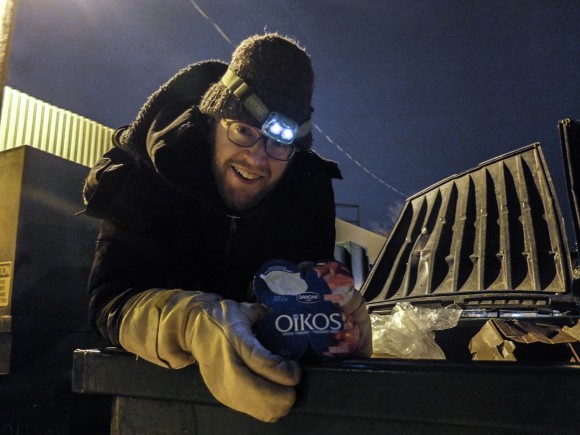 It’s possible to learn more about our contemporary food crisis by jumping into a dumpster than at an organic supermarket (not to discredit some of the nutritious foods one can find therein); we find both the doom of our gluttony and the hope of more gracious eating. Allow me to share a few musings I’ve had when reflecting on my experiences digging around in the bowels of our gluttony.

Gandhi once said, “The greatness of a nation and its moral progress can be judged by the way its animals are treated.” I wonder what our treatment of food might be saying about how we are relating to other people (farmers, the indigenous, citizens of other countries), other animals, and the rest of creation (soil, water, air, the Creator) when we eat what we do? Creation, the ecosystem of which we are a part, consists of sacred relationships requiring us to think beyond just our own food preferences when we eat.

Sifting through the human waste stream under the cover of night, it’s hard not to feel like some self-made superhero liberating unjustly condemned food. The dark powers-that-be throw food into a large metal box and pronounce it “garbage,” but the valiant dumpster diver sets that garbage free, seeing worth and a purpose for it, and then rendering it garbage no more – and showing that it never was. Like wasteful supermarkets, we unjustly “garbage” people all the time when we resort to condemning people for their oddities and blemishes, poor opinions and style, their age, lack of skills, usefulness to us, etc.

If we follow Christ, we take after a dumpster diver of souls who rescues us from the dumps by denouncing the insults, condemnations, and lies about worthlessness we place on each other. Reclaiming worth for each other doesn’t mean claiming perfection or excusing harmful actions the other may have; it means starting with a creative wonder at all the great things that they could become (and the good already in them), locating the image of God in them. It also means that we must take courage to step into that messy and complicated space where we listen and find solidarity with unloved and oppressed people. Disabled people, rude children, transgendered folks, and police are all great places to start un-“garbaging” that which we once “garbaged.”

“Okay, but seriously: Would Jesus Dumpster Dive?” Making wine from water is a more classic metaphor for the richness of a renewed life, but I think that if Jesus was wandering from town to town today as a jobless, sandal-wearing traveller appealing to strange and broke(n) folks with the good news of alternative living, he would probably dip into a few back alleys with local freegans. Not because he was fringy and cool, but because he was radical faith in action and knew something about his creator’s providence.

Living off what we can find in a dumpster is not entirely unlike living out one’s faith in created providence. Just as for the birds of the air (Matt 6:26), the origin of our providence is the bountiful creation of the one who created us, not actually supermarkets, food science, or agricultural development. This is important to remember because, though we can’t all eat for free, it acknowledges that food originated as the avails of nature, predating money, farming, and private property. The act of redeeming food saves us from the insidious and isolating lie that we are more deserving of food than others, inspiring us to share generously the sheer abundance of food existing today.

Dumpster diving is not a solution for the tragedy of food waste and dumpsters are a poor comparison for the providence of creation, but the lessons of gracious eating remain: it becomes increasingly easy to share generously the food we acquire when the feelings of deservingness and financially-determined food security we carry to the table are replaced with a profound gratitude for an undeserved blessing – and that’s true no matter how we work to obtain food. Let’s forage, farm, or buy some food and make a pattern of sharing meals with people, because at the communion table we’re all hungry and undeserving.

Quincy was once a big pharma-working Canadian dreamer, but then defected to the DIY dream. He has workshopped on dumpster diving, stick-n-poke tattoo, food politics and alternative travel, and hopes to master carpentry, pizza-making, and Cree in his lifetime.