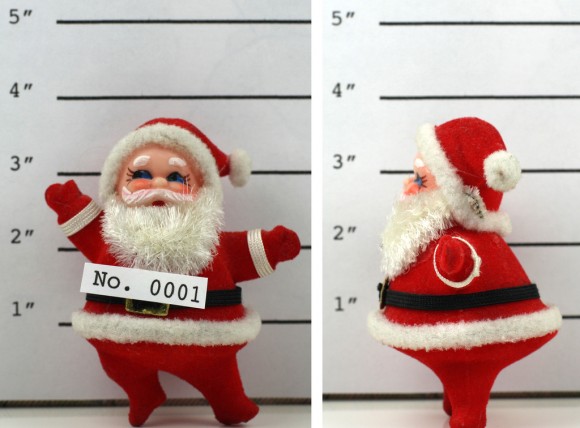 The Santa debate
I don’t know what side you fall on the great Santa Claus debate, but I have been known to refer to him as “Satan Claus.” Yes, shocking I know. This has caused some tension between me and my much loved mother-in-law who thinks he embodies all the cheer and goodwill that Christmas time is supposed to bring out in people. I was raised a little differently than my Santa-loving husband.

When my brother found out Santa was a fake he took the news badly, and being five years older than me made sure I had no delusions about Santa growing up. I was therefore very concerned when my mother took me to the mall to get my picture taken with him.

There are two pictures of me with Santa that capture my feelings about him. In the first I look as though I’ve just been stung by a bee. My face is swollen and red and I’m crying my little eyes out. In the second where I am a year older I have a look of intense horror on my face. I cannot believe my mother made me do it again! Who is this strange man on whose lap I’m sitting? Why is he laughing in such an unnatural, nefarious manner? Has he just committed a crime and gotten away with it?

In my husband’s family there was always the obligatory gift from Santa Claus, a gift that mysteriously showed up in the night. There was no such gift at my house. There was no way my hard-working mother would give credit to an imaginary man for any of the presents under the tree. Straight forwardness, almost to the point of being rudely blunt, was valued in my family. You can imagine how may hearts I broke on the playground when the question was asked “What did you get from Santa?” “Well,” was my reply, ”Let me tell you a thing or two about Santa.”

St. Nicholas
However, as I came to know the story of St. Nicholas, I was immediately taken with it. Here was an actual person who helped the poor, not an overstuffed cookie addict. I could get behind St. Nicholas. I liked that St. Nicholas day was celebrated on December 6, well away from Christmas, so he didn’t compete with Jesus for attention.

As we had children we found ourselves putting out our slippers for St. Nicholas to fill with yummy German chocolate, marzipan, and oranges. I have never written “From Santa” on any present under our tree. I’m pretty sure I’ve also told my kids Santa was a made up story. So imagine my surprise that my 8-year-old completely believes in both Santa and in St. Nicholas!

Santa delusions
She has created a whole set of beliefs around the two figures and thinks they are two different people. This started when she was four and said, to my surprise, that she knew Santa was real for sure. When I asked how she knew she said it was because a present had shown up Christmas morning that was not there the night before. I knew she was talking about the toboggan we had purchased, which was too big to fit under the tree and which my husband had half-heartedly covered with a garbage bag the night before so it could be “unwrapped.”

I had the old urge to crush her Santa delusions, like I had for so many of my school mates. But as I looked into her trusting little face all I said was “Huh.” Last year she told me about all the wonderful gifts Santa had given her throughout the years. The sled, the Playmobile, the Lego, and I asked her how she knew they were from him. “They say ‘from Santa’,” she said. They most certainly did not say “from Santa”! I felt rage building in me. There was no way I, like my mom, was going to let that horrible corporate figurehead take credit for a gift I had given.

But I looked at her little face and just said “Huh” again. I can’t bring myself to crush her beliefs. I imagine my husband is very smug about this, and my mother-in-law as well, although they are both too nice to say anything. My new plan is to make it very clear to our two-year-old that there is no such thing as Santa, in the hopes that he will do the decent thing in his role as annoying little brother and crush his sister’s sugar plum dreams. Elisabeth Franz-Warkentin is the Associate Publisher of Geez magazine.