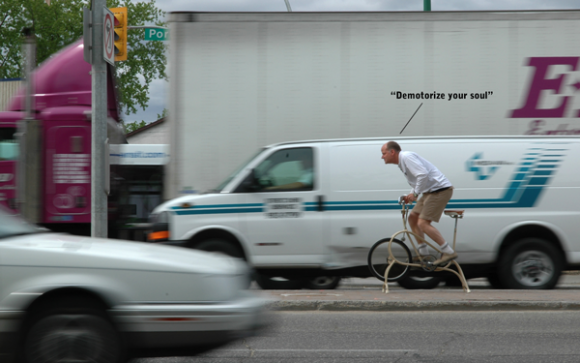 For our tenth anniversary issue, I wrote an editorial about what keeps me going at Geez magazine.

Borrowing from that editorial, here are seven summary reasons why I strive to produce independent, activist media and commentary:

1. Gain agency. The problems are big, and when we receive and participate in independent, grassroots analysis and commentary, we are moved from a vague sense of despair to an informed sense of concern. We fortify our sense of agency and become ready to speak up, advocate, share, vote, organize, and change.

2. Discover inspiration. We gain inspiration from stories of people who seek to bring about good in the world—those who care for the earth, redistribute wealth and opportunities, seek reconciliation among racialized people groups, dismantle a collective superiority complex, set the captives free, address the inequities of capitalism, and so on.

3. Spread compassion. We often receive positive reports from readers. For example, a reader and playwright from Ontario came through Winnipeg a couple months ago. He said after considering our issue on animals (Geez 38, Animal Being, Summer 2015) he became a vegetarian. It wasn’t our goal to reduce the number of meat-eaters (humans are still ominvores), we did aim to move readers to greater compassion to all beings, and it appears one was so moved.

4. Welcome disruption. When we speak out, we expose and disrupt assumptions that oppression is normal. Or, in the terms of the mechanics of social change, we can destabilize a problematic social consensus by voicing perspectives counter to the dominant worldview. This instability affords new views, new values, and more life-giving patterns of behaviour.

5. Invite possibilities. Between our dreams and the current reality is a transitional space where something is becoming. Becoming what? We don’t know. But this becoming is uncontrollable, and it is therefore a threat to the structures and actors of domination. We enter a zone of possibility, and the possibility is open, it is free. Something magical happens when we gather with others, name the obstacle, and begin to dismantle it in whatever feeble way we know how.

6. Behold amazement. Near to each of us is a realm of amazement that we can access as we join with others in efforts to bring about good in the world. We gain a sense of wonder from participation in the life that’s unfolding all around us. Lesser cares recede and lose their grip on our desires. Freedom and focus can emerge, however fleeting.

7. Sense of honour. I am proud to work alongside so many volunteers, writers, and artists. In the past 10 years and 40 issues of Geez magazine, thousands of contributors have fashioned a movement of contemplative cultural resistance.

You can read an online version of my tenth anniversary editorial here. Better yet, you can subscribe and receive a tangible copy of Geez magazine here. Fyi, single copies of this issue are available here.