by Will Braun | Published 26th April 2012 in Social Change 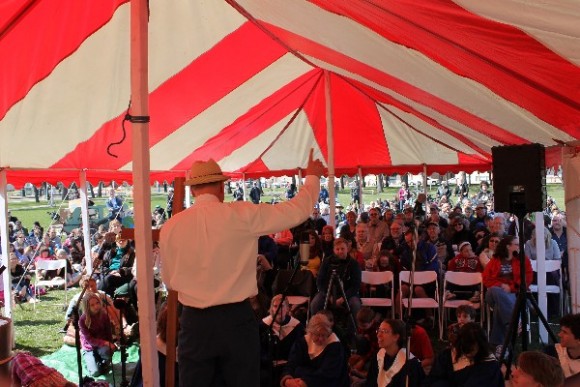 The word being proclaimed at Winnipeg’s eco tent revival. Credit: Will Braun

The faithful and the curious had gathered, 300 strong, for an old-fashioned revival meeting with a newfangled consumption sabbath twist.

The blue-robed gospel choir—which had warmed up for the event with a daring (and brief) flash mob performance inside a Walmart —filed off the stage while Brother Aiden John settled in behind the microphone. His big plaid bow tie framed a slight smirk.

The Sunday morning crowd in our usually staid little prairie city was expectant. We had already heard the rousing testimony of a converted climate change avoider. We had sung spirited gospel numbers. And we had shouted our “Amen’s,” reluctantly at first, then with rising gusto.

The emotional stage was set. Our hearts were prepared—though for what, we were not quite sure.

Some of us were familiar with the way traveling tent revival preachers of yesteryear would invite people to bring their sins to the altar and convert to Christianity at the emotionally orchestrated climax of their services, but none of us had been invited to lay our consumption burdens on the altar, or in this case, on the golden oil barrel next to the cross. 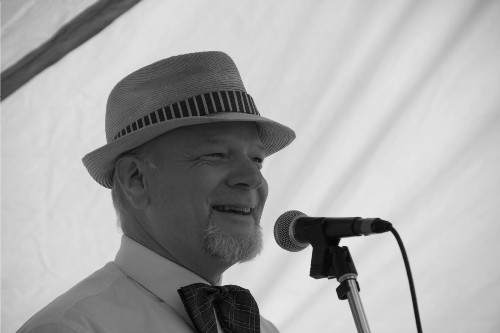 “I used to know the words of salvation,” began Brother Aiden, a 50-year-old former youth pastor, seminarian and evangelical rocker. “But my journey has been one of disillusionment.”

With the cadence and volume of an old-time evangelist, Aiden John continued his sermon: “There must be more to the gospel than a clean heart, material comforts and waiting for the earth to expire. What can be done to keep this earth from going the way of the landfill?”

The event, which took place on Earth Day, April 22, was planned by an ad hoc group of Mennonite, Anglican and unaffiliated Christians in Winnipeg. As organizers, our wish was to combine performance art, sincere faith and concern for the earth. We chose the consumption sabbath theme to encapsulate the imbalanced relationship between humanity and the earth.

“We buy too much stuff; we use too much energy,” says fellow organizer Melanie Dennis Unrau. “We’re literally consuming the earth; spewing our excess into the atmosphere. It’s time for a holy pause, a different rhythm of life.”

The event began with a procession that took participants down the city’s main street, with a golden oil barrel in the lead, toward the tent site.

Our aim was not to parody the revival genre so much as to re-purpose it. So instead of toning down the religious stridency, as is the impulse of our age, Brother Aiden John revved it right up, but with a postmodern spin and plenty of self-referential humor.

During a rant about society’s enchantment with electronic gadgetry, he poked fun at the fact that the service itself was being recorded and thus “lifted from its anchor in creation and somehow suspended in some kind of digital ether.”

To which someone in the crowded yelled, “We are sinners brother!”

We all laughed. But the point about entanglement in a disconnected, screen-centered mode of living still registered. (Saints and sinners are invited to watch revival video clips.)

Lighthearted use of the the revival format didn’t detract from the seriousness of the issues at hand; it made them more approachable. The format allowed Brother Aiden to use the word sin and unabashedly challenge people to give the earth a rest from its role of meeting our insatiable appetite for stuff. But it also allowed everyone to take a big step back from the chokingly earnest vibe that often encumbers faith-based social initiatives.

So when Brother Aiden continued his anti-digitization rant—“Lord save us from the ether!”—our smiles were mixed, in postmodern paradox, with a genuine sense of conviction.

The guilt that has so plagued religion, and that is sure to surface when topics like over-consumption and climate change arise, loses much of its grip when someone in an adopted revival character gives a fiery testimony about being lost in “consumptive sin” and then shouts, “If you’ve ever been lost, will you say ‘Amen’?” 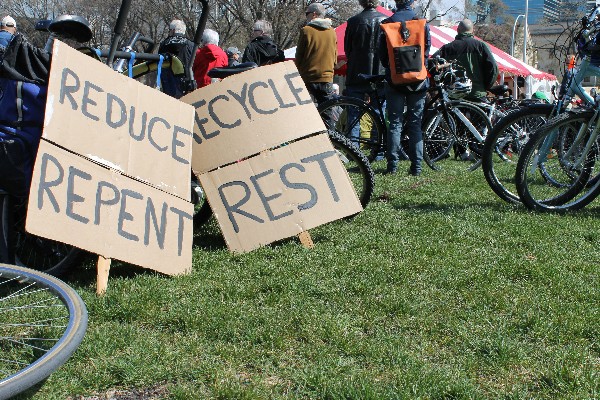 Fittingly, Brother Aiden, aka Aiden Enns, is a former managing editor with the anti-consumerist Adbusters magazine and, of course, the founding publisher of Geez, a magazine with tag line perfectly suited to the revival event: “holy mischief in an age of fast faith.”

He’s also an admirer of Reverend Billy of New York’s Church of Stop Shopping. The Reverend is a performance activist in televangelist character who, among other stunts, took to London’s Tate Modern art gallery last summer to exorcize the dark soul of BP of the gallery’s sponsors—from the building.

So what does a postmodern Earth Day altar call look like? With reference to the imminent use of music to complete the emotional crescendo of the revival formula, Brother Aiden John invited us to write our consumption sabbath pledges on the cards provided and then attach them to the oil barrel at the front.

As the choir sang and swayed, people of all ages streamed forward. They pledged to learn to live in smaller circles—to bike less and walk more, to eat locally, to plant gardens. Many pledged to take a digital sabbath—“no screens on Sunday,” one person wrote. Another pledged not to enter the doors of Walmart for a year.

The changes are incremental. The follow-through, as with any altar call, is not guaranteed. And the irony-laced performance element (not to mention the anti-consumer gist) is not for everyone. But for some, the playful mix of drama, spirit and consumption sabbath helped free up a new path forward.

So, my dear sisters and brothers out there in the ether, I invite you by the grace of our Lord to give your credit cards a holy pause, to let your conscience laugh and to give the earth a rest.