Ready for our Baltimore Moment 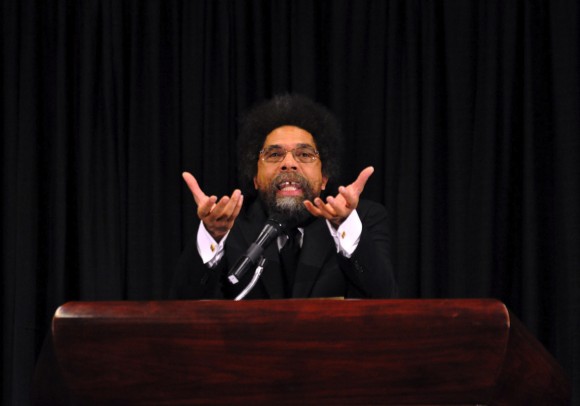 “Justice is what love looks like in public.” Credit: cornelwest.com

What do the deaths of young black men in America have to do with climate change, missing and murdered indigenous women in Canada, and public disdain for women who wear head coverings?

The issues may sound unrelated, but they belong to the same struggle. That was clear at Knox United Church on Saturday night. The event was a panel discussion on bridging racialized communities organized by Spur Festival, a national festival of arts, politics and social justice.

I came to hear Cornel West — a renowned American scholar, race-theorist and provocateur with a magnificent afro and an oratorical style that evokes the Baptist preacher tradition of Martin Luther King Jr.

I’m sure West’s reputation had something to do with the crowds that packed the creaky old church to the doors despite a $20 entry fee.

But it wasn’t just West’s electric personality that carried the night. It was the energy conjured up by three passionate activists of colour who spoke for two hours with honesty and eloquence about the racial, environmental, economic and religious prejudices that divide our city and country.

These struggles for justice are intertwined.

West was joined on the panel by Shahina Siddiqui, the charismatic spokeswoman for Winnipeg’s Muslim community, and indigenous environmental activist Clayton Thomas-Muller. The audience was a diverse group: indigenous Canadians, African Canadians, Muslims, Mennonites, activists, hipsters, grandmothers, students, religious and non-religious people of all stripes. Minutes after listening to a ceremonial drum song, I heard a cellphone in the pew behind me sing out the opening notes of the Islamic call to prayer before its owner found the mute button.

“There is such a sweet spirit in this place. I think it has something to do with Winnipeg,” said West, when he took the microphone. “There is a soulfulness in this city that reminds me of Oakland. Soulfulness is the sharing of a soothing sweetness against the backdrop of catastrophe.”

For West, the catastrophe begins with the oppression of his people. Recent deaths of young black men — Michael Brown in Ferguson, Freddie Gray in Baltimore, and many others killed by police — have sparked massive social unrest in American cities.

Speaking a day earlier at the University of Winnipeg, West suggested Winnipeg is ripe for its own Baltimore moment.

A number of recent events have exposed Winnipeg’s own racism problem: the mayoral election campaign, an article in Maclean’s, the injustice of Winnipeg’s water source, the death of Tina Fontaine and the assault on Rinelle Harper.

Racism and environmental degradation are linked, said Clayton Thomas-Muller. Residents on reserves in northern Manitoba spend up to 40 per cent of their monthly incomes on heating costs, he said. “The ironic thing about that is the majority of the resources going into producing energy across the country are actually resources being extracted from our people’s traditional territory.”

Look at a map of all the oil and gas extraction projects, hydro dams, clear-cuts and mines in Canada, he said. “You will see each and every one of Canada’s most toxic industries and proposed industries is within kilometres, if not right adjacent, to one of our native communities.”

The racial dimensions of environmental degradation are becoming even clearer as climate change begins to create hundreds of thousands of refugees around the world.

Siddiqui spoke about the prejudices Muslim people face in the U.S. and Canada. “Our communities are defined by our crimes, not by our saints,” she said. The majority of terror victims around the world are Muslim. “When President Obama has to go on national TV and apologize for two white men who were killed as part of a drone attack and says not a word about 200 Pakistani children that have died in the drone attacks, and called collateral damage, we know we live in a world that is divided.”

The kind of change we need is only going to happen when all of the different groups working for justice come together to create a social movement. The panelists made it clear they weren’t waiting for elected officials to bring about this change. “If voting would lead to the fundamental transformation of any country, voting would be illegal,” West said.

“It’s our young people and especially our young women, who are going to show us the way,” said Thomas-Muller. He added: “But a whole lot of you non-native folks are going to have to be willing to get arrested.”

As I sat in that hall, filled with so many different people, all hungry for change, I believed such a movement could happen.

Josiah Neufeld is freelance journalist and a contributing writer for Geez magazine.

Republished from the Winnipeg Free Press