by Emily Hamm | Published 1st June 2016 in Ways of Seeing 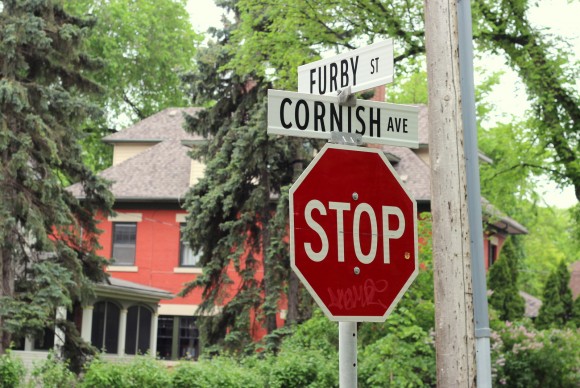 I know a lot about the history of my house. I know that in May of 1912, W. Horner built this brick home on Cornish Avenue in Winnipeg, Manitoba. I know that it cost about $12,000 to build, and that William Gibb White lived in it until he died in 1922. I know it was converted into a triplex in 1940, and that it was rehabilitated back to a one family home after new owners bought it in 1972. I know that it had structural work done in 1933, 1935, and 1938, and that the first Slavic citizen moved into the neighbourhood in 1945 and lived in this house.

The red house, as we currently call it, was a white house at first, which housed William Gibb White, his (unfortunately unnamed) partner, and their servants, coal boy (yes, they were all boys) and all. Since then, the house has been shared between individuals, a number of families, and these days it is inhabited by about 12 people, give or take a few depending on the month, who form an intentional community called Emmaus House. I live there along with (currently) nine other students/young adults and two “real” adults. We sit in the kitchen at breakfast and chat about our plans for the day, we lie on the floor in the living room with the dogs when we really don’t want to do homework, and we groan to each other as we sit in the backyard that we don’t want to go inside and clean the bathrooms on the weekends.

In Geez 36, the Winter 2014 issue, Isaiah Ritzman wrote an article called, “St. Benedict vs. the Apocalypse,” in which he reminds us of the formation of Benedictine communities during the decline of the Roman Empire. He compares the Roman Empire to our current state of industrial capitalism–a mindset concerned with the individual and with power–which cannot last. “We need more Benedicts: people who will have the commitment, the creativity, and, most of all, the love to create stable communities that will anchor us during the storm,” suggests Ritzman.

For decades, 70 Cornish Avenue has been the setting for individuals, people with power who sought control and had control by virtue of their privilege. In its recent decades as a triplex, as a shared house, and now as a community house, I trust this is a space for the creation of this same kind of stable community Ritzman spoke about.

Emmaus house, however, is not an easy place to live. This level of intense community is not common in most people’s lives, and living with others is often frustrating. But, there is commitment, creativity, and love here. Sure, this house isn’t facing the collapse of an empire, but it is facing lives lived by 12 people. Each of us will experience collapse on occasion, and while this community will not stop that, it is a place in which each of us can find hope. Ritzman says that, “If we spend all our energy trying to stop the collapse of civilization, we’ll have nothing left once it happens.”

This house is something we have left when collapse is inevitable. It is a stable place where each of us can find hope in the form of fights over the dishwasher, reading parties in the living room, and never-ending bike lending. There is an acknowledgement that each of us exists, each of us is human, and each of us is a part of something that is not only about us. This community has emerged in a house where the story began with privilege and was built for individuality. Now, it is beginning the process of combating that individualism in the same way the monastics did hundreds of years ago.

Want to read more on collapse, and perhaps the hope we can find alongside it? Check out Geez 36 here, or order a copy here.

Emily Hamm is a summer intern at Geez magazine. She lives in Emmaus House in Winnipeg, Manitoba, with 11 people, two dogs, and one sassy bird.