Pulling out the big guns 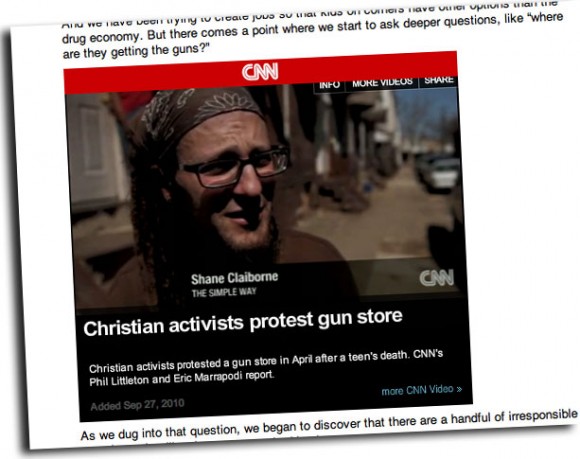 See link to story and CNN clip below.

Recently, I’ve been noticing how often I use gun-related words in everyday conversations.

“Alright, fire away.” “I’m going to blast her for doing that.” “Don’t shoot the messenger.” “We fired him off today.”

I speak a language of casual violence all the time, in a culture where it has come to be accepted. Now I see why, at my serving job, seniors look startled whenever I say, “Okay, shoot.” They are taking my words at face-value, as an expression of hostility; I’m just trying to be friendly, while telling them that I can take their food orders.

This is a problem. I am lightly throwing around statements that are heavy with meaning, meaning that has only become darker as gun violence continues to increase in North America.

Earlier this month, Shane Claiborne (co-founder and leader of The Simple Way) spoke out against gun violence in North Philadelphia, after a week of nightly shootings near his home. He was interviewed on CNN, and wrote a post about it on The Simple Way website.

One way of re-imagining the Jericho road, as Claiborne sees it, is in getting the gun store owners to become more ethical in their business transactions. If store owners follow several guidelines, limiting who is able to buy guns, and how many guns can be purchased within a certain time period, then it is less likely that guns will end up in the wrong hands. The answer is not in enforcing rules and regulations, says Claiborne, but in helping the gun store owners to be more conscientious and discerning. It’s about building a responsible community, from the streets up.

Check out the rest of his article. including the CNN interview.

Rachel Barber is an editorial intern at Geez magazine