by Aiden Enns | Published 15th October 2010 in Experiments in Life 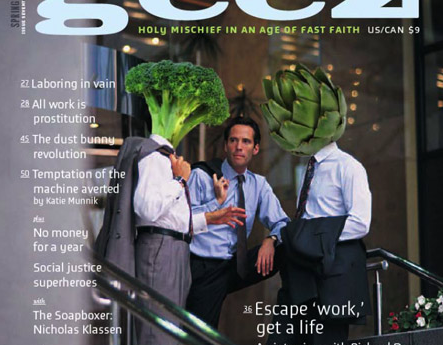 We have two part-time job openings here at Geez: one in circulation (15 hours a week), and a new editorial position (10 hours a week). Both positions are based in Winnipeg, see details below. Please pass this around to anyone you think might be interested. People should respond to jobs [at] geezmagazine.org. Thanks for your help, Aiden Enns, Editor, Geez magazine.

2. Associate Editor
10 hrs/week $6,000/yr
Two-year term preferred, based in Winnipeg, Manitoba
Editorial tasks: assist Editor with theme and call for pitches; read and coordinate pitches; assign and edit stories in feature section, in consultation with Editor; assist with art research and the editing of front and back sections; coordinate proofreading
Other tasks: Assist with website editing, writing, coordination; monthly or eight/year newsletter

APPLICATION PROCESS
(The position will be filled only when the right candidate is found.)

1. Write a letter of application addressed to “Aiden Enns, Editor.” In the letter,
a) describe your interest in this position at Geez magazine and why this is the right position for you;
b) describe also your key skills and background which directly relate to the tasks outlined above;
c) include a statement on the importance of publishing an independent magazine such as Geez.

2. Provide your resume and 3 references. Include other supporting material as you wish.

3. Please submit these
By email: jobs [at] geezmagazine.org

GEEZ MAGAZINE is a quarterly magazine of spirit and social action. It’s for over-churched, out-churched, and perhaps even unchurchable souls on the North American fringes of faith. In its five years of existence it has won “Best Spiritual Coverage” by Utne Independent Press Awards, “Magazine of the Year” at Canada’s Western Magazine Awards and top honours at the Canadian Church Press Awards. Our office is located in a back room of an old church building (Knox United) in Winnipeg’s downtown, across from Central Park.