Non-domination is an article of my faith

by Aiden Enns | Published 25th January 2013 in Ways of Seeing 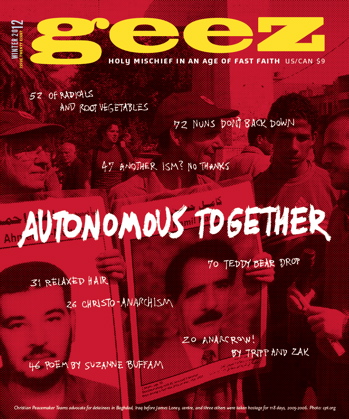 Hey Geez readers, I put my two cents for anarchism in the mainstream Mennonite mix, see the article below. Here I describe some of the ideals behind our magazine.

Don’t be fooled, though. We’re not successful in all our goals, especially in hearing voices that come from places of wealth and white privilege.

Watch for our next issue on feminism, and why it still matters. We’ve put together a roster of all women contributors. It’s looking awesome! – Aiden Enns, publisher, co-editor, Geez magazine.

We should not dominate each other. I really believe this. It is one of the most meaningful affirmations of the Christian faith I have. Can those among us who are strong be confident enough in our faith to follow the one who made himself weak for the sake of others? Does not the seed of evil lie in the moment we compromise the freedom of another person?

For example, I’m naïve enough to think we don’t need bosses. The owner-employee relationship is destined for a double bondage: the owner succumbs to the endless pursuit of wealth and power, while the worker is bound to a life of subservience.

Of course, there are benign capitalists who seek only a comfortable life for themselves and their grateful workers. I call those capitalists noble; yet they are nonetheless willing participants in a workplace arrangement that is inherently dehumanizing.

I exaggerate to make a point: workplaces, families, marriages, church groups, businesses and community organizations would be best served with the assumption that we should not dominate one over the other.

Eight years ago, I set out to establish a magazine that would fulfill as many ideals as possible. We would print on pages that came from paper people discarded; we would refuse to take money for advertising in order to challenge the consumer culture; we would be recognized for excellence within church circles and in the wider community.

In addition, we aim to have women’s voices as prominent as men’s, and welcome voices from minority groups. Like a worker co-op, we aim to own our own business. Crucially, we are accountable to each other, with no boss or chief executive officer, and all receive the same rate of pay. So far, we enjoy modest success in most of these areas.

Still, there are power imbalances, and these need to be addressed. For example, I’m older, more experienced, and have a personality biased towards idealism and persuasion that I blame on my evangelical Mennonite roots. This is an unavoidable problem, especially when working alongside younger or less-experienced workers. A group needs tools to negotiate this terrain.

It takes more than kind hearts to accommodate for power imbalances. It also takes an egalitarian structure, a clear decision-making protocol-we seek consensus-and a grievance policy with teeth. In our case, we are accountable to a board of directors, which I consider a relatively benign ownership structure, seeing as we are incorporated as a non-profit entity.

When we structure domination into our relationships-whether it’s the headship of a husband over a wife, a manager over a clerk, a police officer over citizens-we give up too much of the very thing that makes us human: our freedom.

Of course, the naysayers will claim it’s in our nature to dominate. On the one hand, I agree: the patterns of domination are everywhere. Sometimes the best we can do is strive for a restrained police service, a more rehabilitative quarantine for violent offenders, and so on. But I see this as a necessary compromise, an interim ethic.

On the other hand, I say with Christ, there is another way, the way of gentleness and high regard for the other. Our nature can be transformed by a way of love, hope and peace. This is a path worth pursuing, even though it makes us vulnerable to assailants.

With the juice of freedom in our veins, we already taste here and now the salvation that always eludes those who dominate. For this reason, I call myself a Christian anarchist.

Aiden Enns is the co-editor of Geez magazine, which recently featured Christian anarchism. He is a member of Hope Mennonite Church, Winnipeg, and can be reached at aiden [at] geezmagazine [dot] org.