by Krystofer Penner | Published 15th August 2014 in Ways of Seeing 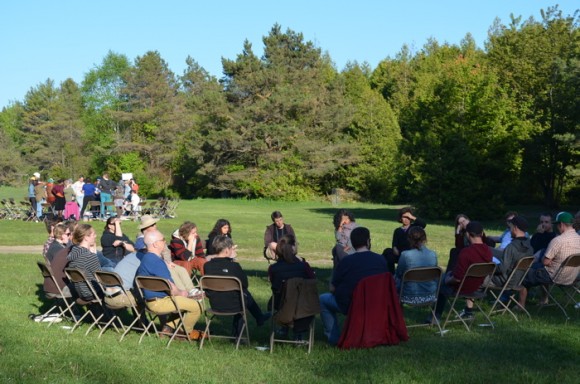 We couldn’t make it to Cahoots this year so we sent some copies of the magazine instead. Kathryn contacted us to see if would run a piece about Cahoots in our magazine; we opted for posting it on the web instead. Here is Kathryn’s Cahoots experience. – Kyla Neufeld

In Cahoots
by Kathryn Gray

At the end of May I travelled three hours with my family to the shores of Lake Huron, Ontario, so we could attend the first-ever Cahoots – a festival of faith, social justice and DIY. I was nervous about going. I am always so desperate for spaces in which the things I care about intersect, and I was worried that I was expecting too much.

What I found at Cahoots did not disappoint.

Over the course of four days 200 people ate (vegan feasts!), sang, and talked together. There were young students just beginning to learn about the social gospel, people who have spent their careers working for justice, and everyone in between.

Many of us often find ourselves amongst activists, sitting in planning meetings or taking notes in workshops, longing to talk about Jesus and the things he had to say about the poor and oppressed. And there are those of us sitting in church listening to sermons and hymns, wishing for someone to mention indigenous rights or the degradation of the earth or anything that would compel us to take the gospel out onto the streets.

This is why Cahoots is so important and necessary. It is the marriage of two worlds that somehow got divorced without anyone noticing.

Cahoots organizers came together from the Student Christian Movement and the Beansprout Collective. Both organizations had a desire to bring the likes of the Greenbelt and Wild Goose festivals to Canada. But, they were interested in getting away from the model of having big, famous speakers who were just there to impart their own wisdom to the masses. “The ‘expert’ model,” says organizer Michelle Drew Both, “just doesn’t resonate because you hear the same people, you read their books and you just hear the same things. It’s great information, but there is another layer that needs to be unpeeled about listening to each other and learning from each other.”

Now, my favourite thing about church is the sermon. I love the idea of hearing what someone who is smarter/wiser/more insightful than me has to say. I have also been known to say that I hate small groups. It is a personal nightmare to have to sit in a room where everybody goes around the circle and answers the question, “How was your week?” But Cahoots challenged something in me. Groups of people sat together, discussing hard topics such as migrant justice, civil disobedience, and radical theology. We all came from different denominational backgrounds and had differing political views and lifestyles, but we were able to engage in honest and respectful discourse. One of my favourite moments was in the Jesus vs. the Establishment workshop when we broke out into groups to discuss a parable. A woman in my group had not come from a faith background and was previously unfamiliar with the parable. She saw it with new eyes and brought a perspective I had never heard before. She helped me understand more about Jesus. And I was humbled. 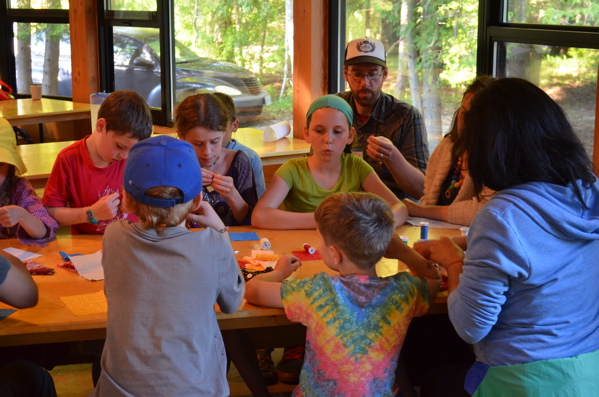 The focus on DIY (do it yourself) at Cahoots is a newer one for these types of gatherings. The DIY ethic acknowledges that within any community everyone has something to offer; communities become stronger because of the skills the members have. Members can rely more on each other and themselves and less on the market economy. I was so encouraged to see groups of people working on projects together, especially when children joined in. Although children’s workshops ran simultaneously to other workshops, there were often children at the DIY workshops like zine-making or sewing. The organizers probably weren’t anticipating having children in the mix, but they were gracious and tailored the workshops so that anyone could participate. I wondered how my children would be impacted knowing that they were equal members of a community in which people were sewing buttons onto fabric out of a desire to work their faith out practically.

Going in, I was also worried about what kind of shape worship would take. In the left-leaning world there is such emphasis on tolerance and inclusion that what is intended to be “Christian” or “faith-based” can become watered down, leaving us with nothing more than “open” and “positive.” I am also increasingly uncomfortable in evangelical environments and so I recognize that there is only a pocket in the middle in which worship feels accessible for me. I need not have been worried. There were quiet moments for reflection, fierce moments as we called out anti-oppression liturgy, celebration with the banging of drums, and the singing of old spirituals. Even with our varied backgrounds and perspectives, we were able to engage in worship and leave feeling like we had been part of something beautiful.

We need more spaces like this. We need these spaces in every city and small town everywhere. For now I’ll settle for a few cabins on the Great Lakes and wait hopefully for next year.