Where do faith and activism collide? 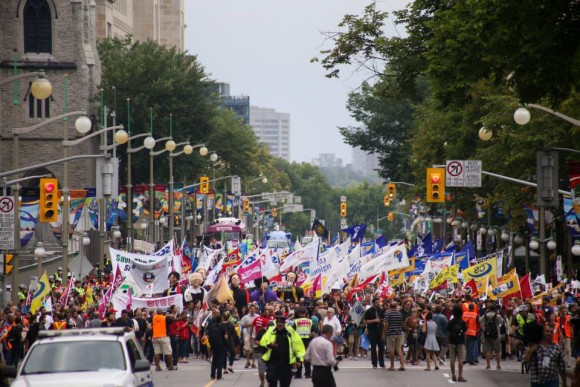 Caitlin Armstrong took part in the Peoples’ Social Forum this past August and offered to write a series of dispatches about her experiences. This is the first of three. – Kyla Neufeld

Where do faith and activism collide?
by Caitlin Armstrong

I spent August 21-24 attending the Peoples’ Social Forum at the University of Ottawa in Ottawa, Ontario. The forum was organized as a way to bring progressive social movements together to fight the battles we are currently facing due to climate change, neoliberalism, and rampant capitalism. For four days over 3,000 activists from from all over Canada flooded downtown Ottawa to march, participate in over 500 workshops, and attend 19 different movement assemblies. The forum culminated in a unifying call to action on the final day to:

…work together to defeat conservatism and neo-liberalism. [To] rebuild a healthy democracy, and to think of another system, not based on oppression and exploitation, but on an economy valuing life and the well-being of people and the earth (“Call to action,” Peoples’ Social Forum Social Movements Convergence).

Since I was in Ottawa while the forum was being planned, I knew there was a desire from organizers to include spiritual workshops, but there was an obvious disconnect between the activist and religious communities. Out of the four spiritual workshops available out of the total 500, one was called “Jesus and Revolution,” led by Maggie Helwig, an Anglican minister and activist from Toronto. The purpose of the workshop was to explore radical Christianity and how faith groups can work within social movements to create a more just world. Organizers clearly underestimated the need for this kind of workshop; during introductions more than one person admitted to being a closeted Christian in the activist community. One of the volunteer organizers who was attending the workshop shared that there had been repeated requests for religious organizations to be involved in the forum, but that they had mostly fallen on deaf ears.

The workshop was held in a small room tucked away in a hard-to-find corner of the campus. By the time I got there for the 2:45 p.m. start time almost every chair in the room was taken, and people continued to stream in to the point where they sat on the floor, on tables, and listened from the hallway. The two-hour conversation was started by Helwig stating that Jesus was a revolutionary. From there we discussed the often unknown dissident Christianity of the early church and how Christians should interact with those in power who don’t share their values. We finished with a discussion on the never-ending supply of band-aids (or charity) that the church has been very good at applying to society’s wounds throughout history. Those in the room agreed that the church has been so busy applying band-aids it has forgotten to look at what is causing wounds in the first place.

Towards the end of the workshop a bearded twenty-something man asked the question that many wanted an answer to: “So what would Jesus do if he was here now?” After a few feel-good responses, Helwig provided some more serious advice: to get ourselves out of the system that is causing the problems – or, in the words of one woman, “Clean up your own backyard first.” Helwig said that the kingdom and the post-capitalist society being discussed at the forum have a lot of similarities. Moving faith communities in that direction can be as simple as asking people read the bible and think about what it might be telling them to do now. As one of the participants in the workshop who identified himself as an Agnostic Mennonite said, “Wearing the religious hat means you have a lot of responsibility.”

I have found that I can better live out my faith through activism than from within the walls of the church where there is often more talk than action. It is going to take a lot hard work from all people desiring to follow the revolutionary Jesus to get faith communities back to practicing what they preach in the streets, but when I sit in a crowded room of people who are committed to making this happen I can’t help but feel a glimmer of hope.