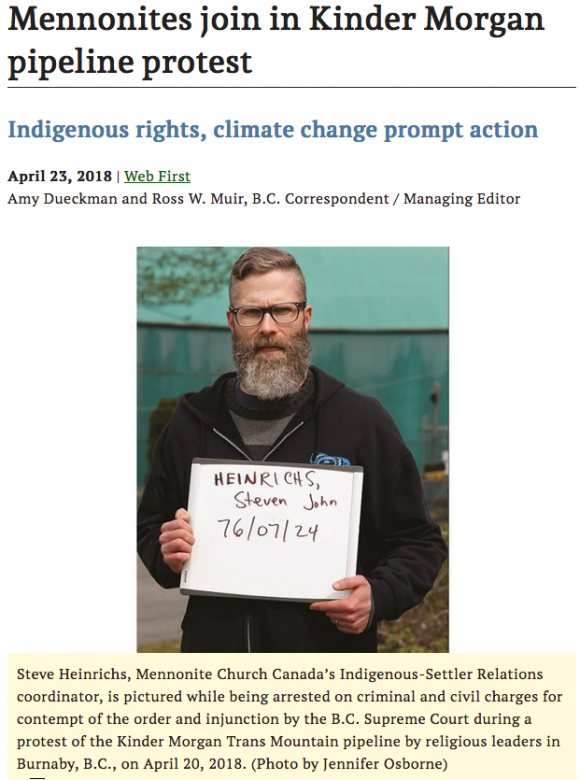 On Wednesday, August 8, a B.C. Supreme Court judge sentenced Mennonite church leader and former guest editor of Geez magazine’s issue on decolonization Steve Heinrichs and Anglican priest and Geez contributor Emilie Smith to seven days in jail for failing to honour a court-ordered injunction to not block the entrance to Kinder Morgan’s property in Burnaby, B.C.

Heinrichs, from Winnipeg, Manitoba, works for Mennonite Church Canada as the director of Indigenous-Settler relations. Supporters in Winnipeg will gather at noon today at the offices of Mennonite Church Manitoba, to show for support for the demonstrators and Steve and Emilie.

The Star Vancouver, reported on the release of Laurie Embree, a 70-year-old grandmother and one of the first protesters given jail time. She was sentenced for seven days and released two days early for good behaviour.

“‘The guards and the inmates were wonderful; good clothes, excellent toilet paper … but the beds and the food were criminal,’ she told StarMetro from her home in 108 Mile Ranch, B.C., on Wednesday.”

Heinrichs’s experience was not as favourable. In an early report, Heinrichs said that the conditions of his incarceration were created to intimidate.

In 2015, Geez invited Heinrichs and Leah Gazan to be guest editors of an issue on declonization. Subsequently, this pair was also instrumental in organizing support for implementation of the United Nations Declaration on the Rights of Indigenous People, including an awareness-raising pilgrimmage to Ottawa. See a report by Christian Peacemaker Teams worker Kathy Moorehead Thiessen here.

Each issue of Geez magazine includes a section on civil disobedience, with special attention to actions taken by faith groups that challenge unjust laws and show opposition to unfair and ecologically destructive conduct of the state.