Fight for $15 and Fairness launches in Winnipeg 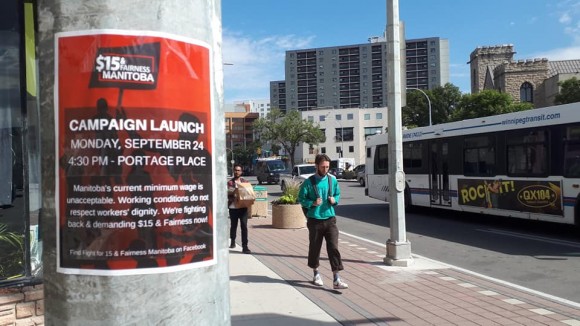 This coming Monday, a worker-led Fight for $15 and Fairness Manitoba campaign will launch in Winnipeg outside Portage Place Mall in the city’s downtown.

Following in the footsteps of successful campaigns in Ontario, Seattle, Los Angeles and New York, the campaign is demanding an immediate increase to the minimum wage in Manitoba and accompanying improvements in workplace conditions and safety.

The minimum wage in Manitoba is currently $11.15/hour, set to increase to $11.35/hour in October. However, the Canadian Centre for Policy Alternatives has calculated that the living wage in Winnipeg and Brandon is at least $14.50/hour and $15.25/hour in Thompson — and doesn’t even cover debt, saving for retirement, or caring for a disabled or ill family member.

$15/hour is an absolute bare minimum for dignity and survival. Anything less is a poverty wage for every worker, regardless of age, student status, citizenship status, incarceration, and job or sector of employment.

As communities of faith committed to justice for the poor and oppressed, this is a great opportunity to get involved with a tangible struggle. A fair minimum wage and improved labour standards enable workers to have economic security and independence.

Over 50,000 workers in Manitoba were earning the minimum wage in 2015, equivalent to 9.1% of the workforce. Many minimum wage earners are women and recent immigrants, many with children and other dependents. Additionally, a total of 162,000 employees in Manitoba currently make $15/hour or less, or almost 30% of the province’s workforce — they would all benefit from an increase in the minimum wage as well.

Contrary to claims by business interests and chambers of commerce, increasing the minimum wage has no impacts on employment levels.

In 2017, four economists wrote in The Globe & Mail: “many highly credible empirical studies have confirmed the basic findings: there is almost no employment impact from moderate increases in minimum wages. Substantial recent research in Canada, the United States, and Britain also concludes that higher minimum wages succeed in lifting incomes for low-paid workers and reducing wage inequality.”

In Ontario, where the minimum wage was recently increased by 21% to $14/hour, the unemployment rate fell to 5.4% — the lowest in almost two decades.

The campaign that will be launched on Monday is about much more than wages. Other demands include the strengthening of health and safety enforcement on all job sites, seven days of paid sick leave per year, and three paid family days per year, automatic union certification when 55% of workers sign union cards (without a secret ballot) and improving scheduling laws.

On Tuesday, McDonald’s workers in 10 cities across the United States walked off the job to protest the company’s failures to address sexual harassment and abuse. This is the kind of hugely inspiring and impactful protest that can come to Manitoba and Canada, if we organize for it.

Fight for $15 and Fairness Manitoba will be seeking volunteers from the community to assist with the growing campaign and is planning volunteer orientation sessions. Rallies and other actions will continue in the coming months to demand fair wages and conditions for all. Please come out to the event if you’re in Winnipeg and help spread the word even if you’re not!