by Will Braun | Published 30th August 2011 in Ways of Seeing 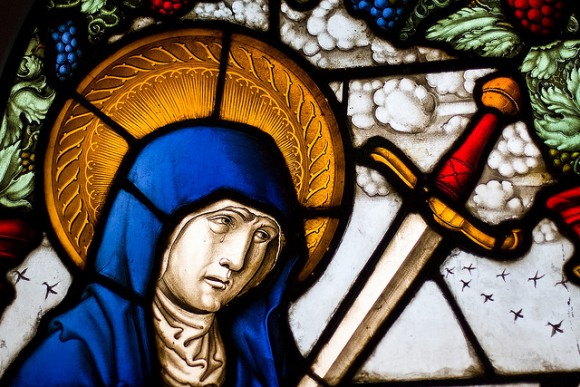 The view out the window of a church in Basel, Switzerland. Credit: Pedro Szekely / flickr Creative Commons

I sat in church on a glorious, sunny morning. The pew was soft, the air conditioning was cool and the stained glass was in the way. While the Scripture was read, I peered outside, as best I could, through the gaps in the new stained glass windows. I recall thinking the Bible belongs out in the sun. So much of it happens outside. It holds a spirituality shaped outdoors. The stained glass seemed to obscure and obstruct that.

I love stained glass, but not if it blocks too much of the view. I like to look outside when I’m in church. My soul gets a little claustrophobic if I can’t see any sky.

Wendell Berry says the Bible “is a hypaethral book, such as Thoreau talked about – a book open to the sky.” He doesn’t say anything about stained glass as another layer between believers and the outdoors, but he does say the Bible “is best read and understood outdoors, and the farther outdoors the better.”

I would qualify that a bit. Shelter has always been a basic human need. It makes sense for some spiritual gatherings to happen indoors. But perhaps we could think about adapting building design so as to provide shelter without becoming a psychological fortress against God’s natural habitat. And perhaps we could think about religious practices more conducive to outdoor observance.