Don’t judge a church by its sanctuary

by Aiden Enns | Published 14th September 2011 in Ways of Seeing 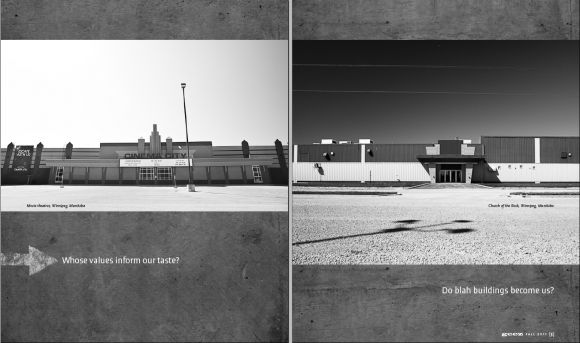 In the opening spreads of Geez 23 on Sacred Space, we published side by side photos of a bland movie theatre and an equally bland church (above left and right, respectively). We gave it the caption, “Do blah buildings become us?”

I was expecting people from the church, Church of the Rock in Winnipeg, to comment on our depiction on their facility. Instead, we got a letter from someone who’s from Cinema City.

Ah, well, he’s not from Cinema City, he’s from the church that meets there on Sundays. He said his daughter, who’s four years old, doesn’t even see the building as a cinema. “There’s our church,” she says as they drive by.

I wrote about this and how I have to pull myself back from knee-jerk judgments in an article in Canadian Mennonite, see the whole article here.

Because church buildings are usually in residential areas, they can be used for all sorts of community building efforts. Instead of focusing on what a church looks like, I like to focus on what a church is used for. Where spiritual folks reach out beyond themselves and reach out to their local community, that’s where begin to see the presence of the divine.

I ask questions like: “Where is the stranger and the outcast welcomed? Where are the people who were formerly in need and now receiving care from a community? Where are warm beds available and vegetables grown for eating?”

In this same issue of Geez, we highlight several examples of churches engaging their communities. They’re embodying an alternative way to “do church.”

For example, I write,

“At First United Church in Vancouver’s Downtown Eastside, more than 100 people are allowed to sleep on its pews on cold winter nights. Columbus Mennonite Church in Ohio dug out asphalt from its parking lot and planted a garden with flowers and shrubs.

“Wood Heights Baptist Church in Toronto, Ont., converted flower beds into vegetable gardens and use the fresh produce for community meals and distribution at the food bank. It’s easy to judge Christians by the buildings in which they’ve chosen to worship.

“I know I’m prone to drawing quick—and often ungracious—conclusions about people based on where they live or the size of their sanctuary. It’s harder, but better, to investigate further and look for signs of hospitality and generosity.”