by Aiden Enns | Published 9th May 2017 in Social Change 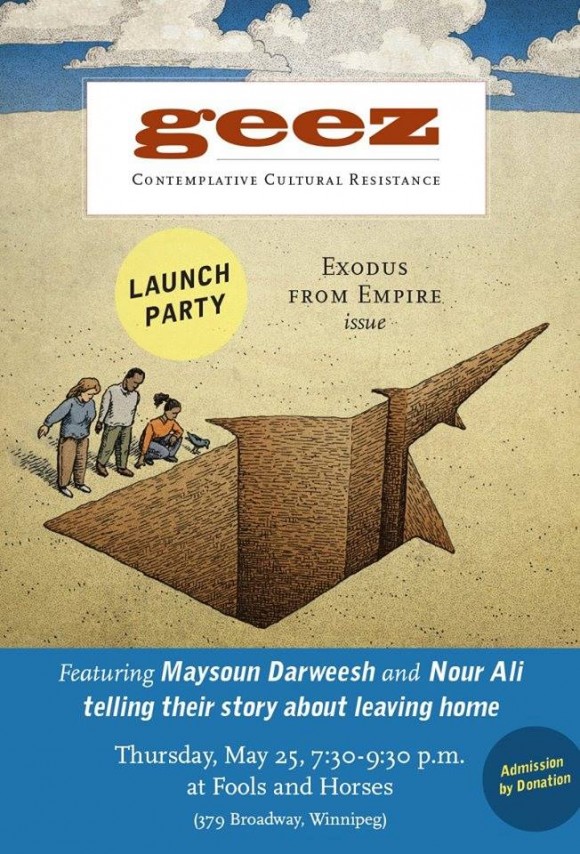 For the launch of our next issue of Geez we’ve invited two guest speakers to talk about their exodus from Syria and how they made their way to Canada as refugees, Maysoun Darweesh and Nour Ali.

As a young adult, Maysoun rebelled against social norms. She resisted the pressure to get married and have children, and enrolled instead in university.

“I needed to prove myself in some way,” she said in an interview published by the Immigrant Centre in Winnipeg, Manitoba. “I rejected many things I love. I decided not to marry or have children. I chose my own way in life because I couldn’t follow blindly,” she said.

However, her perspective changed when she met Nour in 2001 while studying journalism at the University of Damascus. After only five dates, Nour proposed. They were married two years later. Both of their daughters were born in Syria. But they were living in an unstable and often terrifying environment.

Nour ran his own company in Syria and was very active in promoting human rights. This got him into trouble. The government captured and tortured him three times. He was warned of a fourth arrest and fled to protect himself and his family. “He left without telling me anything. I didn’t see him for one year. He disappeared,” Maysoun said.

Months later, Nour called from Turkey. “He told me: they want to capture me and they will torture me and probably put me in jail for a long, long time. Maybe they will kill me,” she said. Nour went to China while Maysoun and her girls stayed in Syria, facing daily home invasions from government officials who suspected Maysoun of harbouring her husband. “It was terrible. A nightmare,” she said. “I told him he had to find a solution because I couldn’t continue.”

With help from her father- and brother-in-law, Maysoun and her infant daughters left Syria to meet Nour in Macau in 2008. The family was stuck there for five years, unable to leave until another country accepted them. In 2013, hope became reality when the Canadian government came to their aid.

You can read more about Maysoun and Nour in an article by Katrina Sklepowich at the Immigration Centre here.