by Kurt Armstrong | Published 30th April 2015 in Experiments in Life 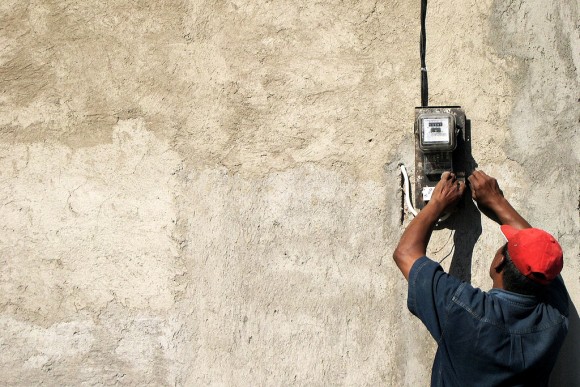 My improvised, patchwork “career” currently includes roughly 20-25 hours per week as handyman/builder, my latest project being a bathroom renovation in a 100-year-old house in the Wolseley neighbourhood of Winnipeg. I’ve been repairing and renovating parts of people’s homes for more than five years now, and I can do a little bit of everything – some brick repair, straightforward cabinetry, rough framing, basic plumbing, installing and finishing drywall, putting down flooring, and setting tile.

Last week I was working on the electrical, running power from one light and one outlet to five lights, four outlets, and a bathroom fan. If I had to pull wire and install device boxes eight hours a day I might eventually get tired of it, but my renovation work is part time, and pulling wire only a fraction of that, so I still love it. My skills are limited, but my jobs are usually straightforward, and unlike some of my other tasks, it’s pretty easy to tell if you’ve done the electrical right: turn on the breaker and the lights, and if the lights light up and the breaker doesn’t trip, you’re good to go.

It was working fine until I wired the new light fixtures: every time I turned on one bank of lights I tripped the breaker. I checked all my connections and made countless trips from the second floor bathroom to the breaker panel in the basement and back again, but after a couple hours of troubleshooting, I was stuck. I asked my electrician friend Rob, who has been wiring houses, shops, factories, and grain elevators for nearly 30 years if he could help me figure out what was going wrong. I bought him a fancy cup of coffee – the only payment he’s ever willing to accept – and he came over to the house to check my work and tidy up my wiring. He pulled at some of the wires and found a tiny nick in the black wire to one of the lights. “A ha!” he said. “There’s your problem right there.” He undid the fixture, snipped and stripped the offending wire, and reconnected the light: problem solved.

I’m still learning some simple aspects of wiring so I feel heroic when my work actually works. I have to think very carefully about how to run power from one spot to another, to the switches and then to the lights. Rob is so good it looks like he doesn’t have to think at all, but I know that’s not true. He certainly does think: he thinks like an electrician. An electrician knows the narrative of wiring, knows how to “write” the story for the electrical layout for a room or a whole building. In a few minutes he can troubleshoot what has stumped me for hours because, like a storyteller, he knows what comes next, and the number one reason it looks easy is because he’s spent tens of thousands of hours practicing.

There’s an embodied knowing when he works – stapling cables, cutting and stripping wires, twisting marretes, folding cables into boxes – his tools like prosthetic extensions of his hands. I’ve spent most of my life around people with skillful hands – farmers, builders, and bricklayers, as well as a number of musicians and artists. I never thought much about what they were doing until I started trying some of those things for myself. When I started to do more, I began watching their work more closely, and soon those with skilled hands looked like a magician’s. It might not impress everyone, but to me, the skills of a master bricklayer can be as dazzling as those of any prestidigitator, and an electrician who can read a schematic diagram and wire a whole building is powerful in ways an illusionist can only ever pretend to be.

So here I sit, typing my thoughts on a little keyboard, and there you are reading this blog, the two of us having clicked and typed our way to this little virtual place of shared thought. As I’m writing I’ve been shifting back and forth between various activities – I printed out some poems, Googled a writer I’m interested in, listened to some music online, sent a handful of emails, checked the news and weather – click, click, click. The volume of information accessible through my fingertips astonishes me: I can look up absolutely anything. And from time to time this powerful little computer makes me feel like I can do almost anything.

But as soon as I log out and get up from my chair I start to run into real limits. I head to the kitchen because I need to bake bread, and as I measure and mix ingredients that sensation of infinity I got from all that clicking starts to dissipate because the physical world is governed by very real boundaries and limits that I defy at my own peril. I add the yeast, flour, salt, and grains to my dough and if I don’t stick to the story of what comes next, preferring instead to indulge my sense of “infinity,” more than likely I’ll end up with six inedible bricks (done that). Or, say I try to exercise my capacity to do anything my heart desires when I’m wiring the bathroom: I’m liable to encounter 120 volts suddenly surging through my body (done that, too).

I’ve heard professors trace the mind/body duality back to cogito ergo sum – I think, therefore I am – and a cadre of Enlightenment philosophers, though the exercise seems a bit futile. No matter how precisely you trace the history of the idea, it doesn’t alter the fact that in almost every significant way Western culture privileges the abstract over the real, now more than ever. Whether as paid work or for recreation, most of us spend hours a day sitting on our asses staring at screens, largely inattentive to everything but the pixels. We lurk in the unreal. And it could be that right now you and I are just making things worse: me sitting here writing, you sitting there reading it online, both of us reinforcing the bias for abstraction, well-worn tracks laid down by 17th century French philosophers, now reinforced by 21st century Silicon Valley billionaires.

We lurk in the unreal, but flesh and blood is where we live. Your online presence will never be the equivalent of your real presence. In her poem “Spring,” Mary Oliver writes,

“There is only one question:
how to love this world.”

How to love this world, with all its boundaries and limits, its uncomfortable reminders and inflexible demands – and oh, the wonders it contains. I’m not anti-intellectual or anti-technology, but I am decidedly pro-real. I privilege the real, not just because fixing and building things is my bread and butter, but because none of the things and the people I care about are “virtual” or “abstract:” without exception, all of them are real.

Most of the tradespeople I know are articulate, creative, thoughtful women and men whose bodily knowledge doesn’t carry the same cultural cachet as philosophical prowess or high-tech know-how. My friend Rob, the electrician, has a vast range of artistic and creative chops, but part of what makes him one of my favourite people on the planet is how the work of his hands has taught him how to be a human being. He doesn’t have a body; he is a body. And there are things he knows in his fingertips that Google searchers will never, ever understand.

My kids get regular doses of the “no limits” sentimental gibberish in school, and it grates on me because the real world is full of limits. The illusion of infinite power works nicely when you’re nothing but eyeballs and a clicking finger, your limbic system twitching with stimuli as you bounce from one online enticement to the next. God bless the internet and all those clicking fingers, but when the power goes out and the servers crash or you need your toilet plunged, you’re going to need the kind of body that knows more than just clicking and dragging to get the job done.