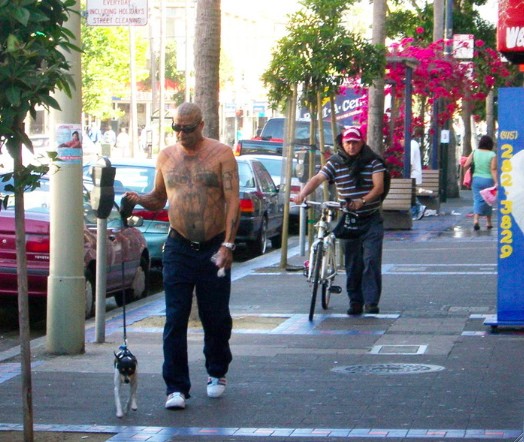 Henry is by far the scariest looking friend I have.

Covered in tattoos and built like a brick he’s like a cross between a biker and a skinhead. What comes out of his mouth more than matches his physique for he is easily the most offensive and foul-mouthed person I know. “People think I’m a thug or a felon,” he tells me, and I can see why. What’s missed by everyone who’s busy thin-slicing Henry is the fact that he’s loyal and warm and addicted to being helpful. Like me, most people work pretty hard to minimize internal contradictions, making sure they present a cohesive image of themselves. Henry, however, likes to propagate the negative stereotypes he’s been handed while defying them at the same time. “Sure I’m a horrible person, but I’d get ripped apart by dogs to save your kids. And you don’t want to cut that shit short.” He’s right. I don’t.

Henry and I set out one summer evening with his pug, Grumbles. Our conversation turns to his tattoos. “They’re a billboard,” he tells me. “My tattoos are poison. People can tell.” When I ask what they communicate he says, “My propensity for sudden and horrific violence.” While Henry regales me with endless stories of his violent exploits I can’t help point out that he’s walking the world’s cutest dog. Not only is he walking her, but if anyone so much as looks at Grumbles, Henry stops to let them pet her, saying “Want a pug hug?” I am surprised by the playfulness with which he interacts with people and I’m entertained by their looks of uncertainty. “People who walk their pugs on hot days should get their f—king throats cut. And I mean that in the nicest possible way,” he says to a small group that’s gathered. When I ask why someone so horrible chooses a pug as their accessory, he says, “It’s kind of a nice counterpoint to my demented weirdness, don’t you think?”

Not only do people interact with their own social identities, but we all make judgements about the identities of others. This is where the over-generalizing of stereotyping is most dangerous. One overpowering characteristic of a person clouds our ability to see the rest of them. Henry, my most-stereotyped acquaintance, is also famous for his own offensive generalizations.

We’re walking home one day when Henry gets a phone call. A friend needs to borrow forty dollars and so comes to meet us on his bicycle. I recognize him instantly as a guy who lived at the shelter I used to work at. I knew him to live a high-risk lifestyle (to put it mildly). As he rides away I express surprise because Henry is very vocal about his take on societal “misfits.”

“People who won’t work? Round them up and gas them and render them into soap. And also, people who make noise and who bother other people, all the homeless, people who commit violent crimes, people who spawn criminal children, people who are irritating, long term substance abusers, anybody who’s in the shelter system.”

I can’t help but play devil’s advocate since I know something of Henry’s history. “At points in your life you have fit into more than one of those categories.”

“The older I get the less tolerant I get. My friends who’ve been in and out of jail their entire lives should be gassed. They’re a waste of skin.”

“But you were a waste of skin. If the universe was somehow merciful to you and gave you a second shot, then why not mercy?”

“It’s their bad luck. Winston Churchill said, ‘He who is not a socialist in his youth has no heart and he who is not a conservative in his elder years has no brains.”

It’s an appalling application, but I can’t help but wish that Winston had coined some clever phrase to explain the contradictions within myself.

kathryn gray lives in toronto, ontario. Henry’s and Grumbles’ names have been changed to respect their privacy.