Games for Fun and Liberation 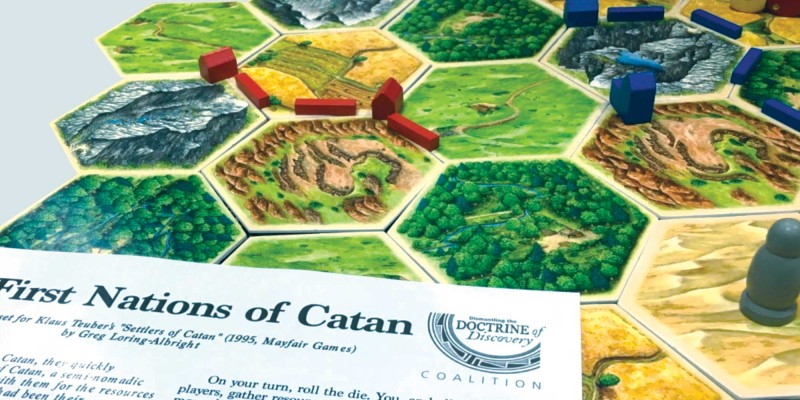 Get your game on.

I’ve included a mix of light party games, games that have become widely popular in the board gaming community and a few less well known games with a liberation orientation. I’ve roughly ordered them from simplest to most complex (with the exception of the last game on the list). In other words, if you are looking for a game for a party, start at the top. If you are looking for a satisfying compex gift for a board game geek, start at the bottom. – tn

Code Names, Vlaada Chvátil (2015) I’ve seen this game delight again and again at parties. It is a team game where a clue giver on each team tries to give one word clues that connect disparate words together. It takes a minute to understand and join in and offers suspense and intrigue in just the right doses.

First Nations of Catan, Greg Loring-Albright (2015) This is a variation of the classic Settlers of Catan that subverts the colonizing aspects of the original game. The game pushes back on the “empty land” myth of colonization, perpetuated by many popular board games, and adds a new Indigenous faction that plays by different rules than the settlers. All you need is a standard issue of Settlers of Catan, one extra piece, and these downloadable rules.

Azul, Michael Kiesling (2017) In this game you lay tiles to decorate the walls of your palace. It is easy to learn and has simple game play with interesting choices to be made as you create attractive patterns. It has been wildly popular in the last five years and connected with many people newer to board games.

Autonomía Zapatista, people and collectives in solidarity with the Zapatista Tour for Life (2021) This is a cooperative game developed by supporters of the Zapatista movement to educate about life in a Zapatista community. You must make decisions collectively about how to respond to natural disasters and paramilitary incursions. You win when you are able to achieve the 13 Zapatista demands and seven principles. The rules are available in 13 languages.

Strike, Brian Van Slyke (2020) In this cooperative game, you play workers in a future city owned by “HappyCorp” a massive corporation bent on taking over everything. Each worker has unique powers they can contribute to the organizing the worker rebellion through strikes and campaigns that draw on popular support. The game’s “smile drones” and “commercial breaks” provide a satirical and funny window into the dystopian future world you are playing in.

Bloc by Bloc, T.L. Simons (2016) Workers, students, neighbours, and prisoners work together to liberate a city district by district in this semi-cooperative game. Except sometimes they don’t work together: factions may secretly have a vanguardist agenda or a nihilist angle and just want to see everything burn. Clash with the cops, build barricades, and create autonomous zones in a city whose layout changes every game, before time runs out and a military crackdown dashes your hopes.

Innovation, Carl Chudyk (2010) Technology and our ideas of progress are at the centre of game play in this card game. You play cards in front of you representing technological developments like agriculture and robotics, but also political concepts like socialism and emancipation. These cards combine to create an ever changing landscape of social and technological change.

Wingspan, Elizabeth Hargrave (2021) In this game you play birds into their habitat and the game mechanics reflect ecological patterns in the wild. It’s already become a gateway game: it has attracted new people to the world of board games including many bird lovers. The designer, Elizabeth Hargrave, set out to design a game that didn’t revolve around castles, villages, or trains and, in two years, has already had a huge impact on the board gaming community.

Root, Cole Wehrle (2018) In most games, every player plays by the same rules. In Root, each player has a completely different set of actions they can take on their turn and ways to score. Furthermore, it’s one of the few games where you get to play an insurgent liberationist movement. The rules can be finicky and confusing, so learning with the online app is a good option.

Spirit Island, R. Eric Reuss (2017) The story of colonization with the settlers as protagonists has permeated the board game community since Settlers of Catan brought many of us to the table over 20 years ago. Spirit Island is a cooperative game that flips the script and has you playing gods protecting an island and its Indigenous people by driving away colonial invaders.

Untitled, Carla Kopp and Jay Bell (2022) I’m working with the Dismantling the Doctrine of Discovery Coalition and TESA Collective (publishers of Strike) to develop a new game that will challenge some of the ways classic board games (like Puerto Rico and Settlers of Catan) draw on settler and colonial patterns like the myth of an empty land and winning through resource extraction. The game will offer players alternatives that relate to the land in a regenerative way. Visit dofdmenno.org to sign up for our newsletter and get updates about the game.

Tim Nafziger (he/him) is a Mennonite organizer who lives on the traditional lands of the Chumash people in southern California. He works as a digital consultant and geeks out on board games, deep conversations and facilitating meetings. Thanks to Benjamin Isaak-Krauß, Carl Meyer, and Linda Quiquivix for contributing to this list.