Foolish Ancestors: Tricksters from Around the World 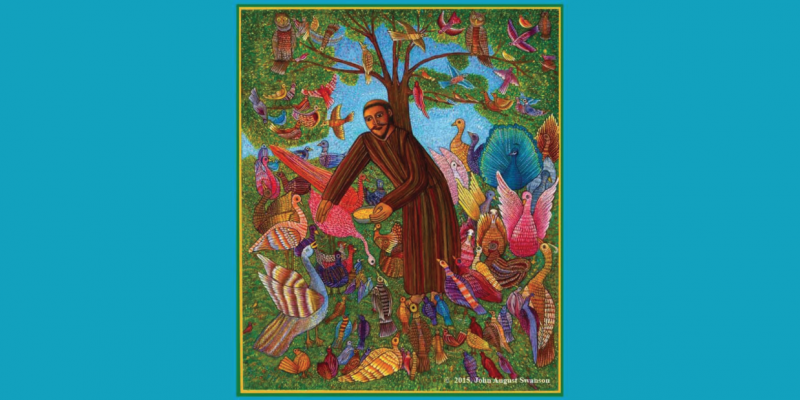 Within Christianity there is a strange subset of the prophet called the “holy fool.”

Holy fools defy social convention in both word and action – sometimes in bizarre ways – out of their religious devotion.

In the West, Saint Francis is our typical holy fool. Born in the late 12th century, Francis was known for famously renouncing his inheritance by stripping naked, kissing lepers, preaching to forest creatures, and living a life of such stark simplicity and deep generosity that it sparked a movement that continues to today.

An early follower of Saint Francis, Brother Juniper, took on this role as well. If Francis is a fool to us, then Juniper was a fool to Francis. A fool’s fool. His stories live in that space between history and fiction, since Juniper served as both comic relief and moral exemplar for the fledgling Franciscan movement. Francis famously said, “Would to God, my brothers, that I had a whole forest of such Junipers.” (One of the most famous Christian saints was, apparently, into puns.) Juniper was so innocent in his desire to serve the poor that he would simply rob from the “haves” to give to the “have nots” without any sense he had done anything questionable.

In the Eastern Church, holy fools, known in the Russian church as yurodivy, were intentionally homeless, spoke in riddles, and caused disruptions – even to the point of speaking treasonous words against the Emperor.

One such fool was Blessed Basil of Moscow. He shoplifted to feed the poor, walked around naked all year long, and weighed himself down with chains. All the while, he loudly spoke condemnations against Ivan the Terrible for his cruelty and violence against the poor. According to tradition, the yurodivy was sacrosanct. Even the Emperor wouldn’t lift a hand against a holy fool for fear of God’s wrath.

While Basil may be the most famous yurodivy, the sixth century Saint Simeon is the patron of holy fools. He began as a hermit in Syria, but one day entered the gate of Emessa and wandered the city, skimpily dressed, dragging a dead dog and throwing nuts at priests. He tripped people on purpose and could be seen dragging himself along on his butt. After worship services, he would turn over the tables of those who sold pastries to churchgoers. Such erratic behaviour drew scorn, abuse, and beatings. All the while, he healed the sick, fed, the hungry, and did other saintly deeds, mostly in secret.

Another holy fool is Saint Isidora, a 4th century nun at the convent in Tabennisi, Egypt. The other nuns despised, rejected, and ridiculed her, since she seemed insane and ate alone. Isidora was given the worst job at the convent – she was the dishwasher. Instead of partaking in what the other nuns ate and drank, she ate what the others left behind on their plates and drank dirty dishwater. And, customarily, she wore a dishrag on her head like a crown. Though abused by the other nuns, she demonstrated great kindness and patience. She never complained about her treatment.

One day, Saint Pitirim, a respected desert hermit, received a vision. An angel told him to go to Tabennisi to find a vessel of God’s grace. She would be known by the “crown that shines above her head.” He travelled to the monastery but couldn’t find the promised “vessel.” Later, the sisters brought Isidora to him for an exorcism; they were convinced she was possessed by a demon. Upon seeing her and the rag upon her head like a crown, Pitirim fell to his knees and asked for her blessing, proclaiming that she was the promised vessel of God’s grace. Astonished, the nuns repented for their harsh treatment of Isidora and began to treat her with honour. Several days later, unable to bear the praise, Isidora fled her convent. What happened to her remains a mystery.

Christian history is filled with such odd specimens.

But there are holy fool figures in other spiritual traditions: The Lakota recognize the role of the heyoka – a sort of clownish truth teller. Black Elk was a heyoka. Other examples are the ancient Greek cynics (particularly Diogenes of Sinope), the Hindu avadhutas, Sufi kalandars, and the Tibetan Buddhist nyönpa.

Not all traditions would necessarily see such holy fools as subversive or prophetic, but that is often the case. One way of looking at the holy fool is that they tend to be prophets but with the extra infusion of the Trickster – those figures from myth or folklore that use cleverness to trick their foes or to simply prank heroes for their own amusement.

There is an ableist, 21st century interpretation of the deeds of holy fools as those of people suffering mental illness. It is indeed holy fools’ actions that directly confront and undermine the pathological social conventions of our time, and of times past.

In a world where poverty, war, and alienation are commonplace, expected, and reasonable, we need holy irrationality. Our resistance movements need a healthy dose of holy foolishness: embodied convictions that are so out of step with the status quo, that we appear bonkers. Perhaps it is by persisting in that embodiment that we can begin to cause those around us to question the sanity of our cruel world.

M. Ashe Van Steenwyk is the executive director at the Center for Prophetic Imagination. Ashe is a writer, teacher, organizer, and spiritual director. For nearly 15 years, they have sown seeds of subversive spirituality throughout North America. Ashe is the author of That Holy Anarchist, unKingdom, and A Wolf at the Gate.