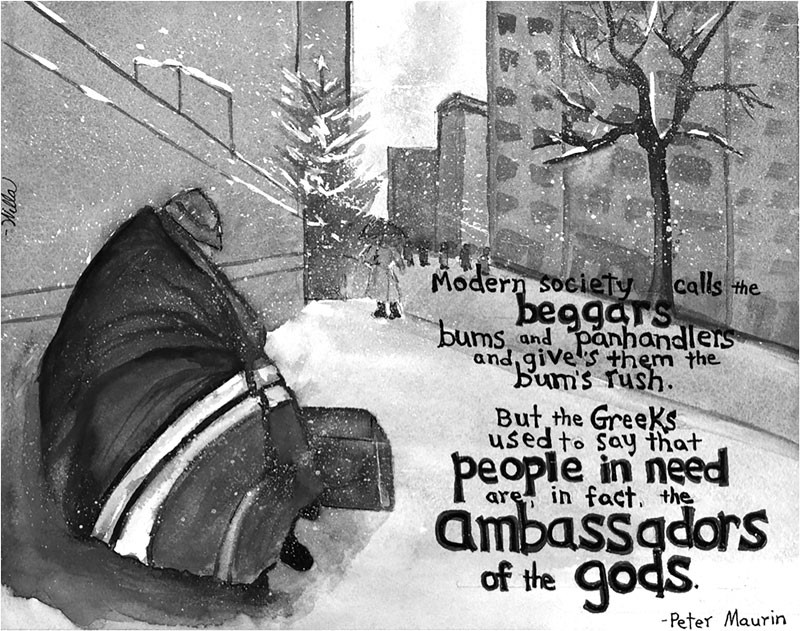 Ambassadors of the gods Credit: Willa Bickham (details below)

Christian missionaries got this bass-ackward.

^Ched Myers reads his piece as part of Geez Out Loud. The audio is an exact reading of the written article.

The Road Not Taken (Luke 9:1-6)
This is an adapted version of a Bible study offered during the Bartimaeus Kinsler Institute 2019.

Luke’s version of Jesus’ so-called “Missionary Instructions” (Luke 9:1-6) does not come up in the Year C lectionary, but it surely haunts the consciousness of Christendom. The short version is simply this: had Christians observed these simple guidelines for how to interact with other peoples and places, the history of the world would be profoundly different. Jesus could not have been clearer or more unequivocal in these marching orders, but for the most part our ancestors in the faith ignored them. Consequently, there has been hell to pay: a legacy of domination and supremacy and genocide tattooed on the centuries and on every land around this great Earth mother.

We would-be radical Christians would prefer to disassociate from this history and its legacy – as if our privileges were not rooted in it. But we should instead name and face it in order to exercise what Elaine Enns likes to call “response-ability,” which means fully embracing the great and difficult historic work of healing and repair.

The perverted gospel of colonization was, and is, founded upon a colonization of the gospel – that is, elaborate theological systems that ignore or rationalize away the clear instructions Jesus gave to his followers. So it is important to pursue a radical analysis that returns to the roots of our tradition to seek out where we Christians went so wrong. Luke is quite interested in Jesus’ missionary instructions, recorded in chapter 9 in the sending out of the Twelve, and again in the sending out of the Seventy in Chapter 10 (which is more elaborate and detailed). Let’s look at the salient points of the shorter version.

First, note that the “what” of the mission is twofold: to proclaim the alternative socio-political order called the Kingdom of God, and to confront demons and cure disease. This latter aspect is reiterated in the last phrase in verse 1 as “healing the weak,” which connotes both physical and socio-economic vulnerability. These same two aspects are narrated in the concluding part of this passage as a framing technique of repetition so we don’t miss it.

This brings us to the first “how.” The significance of verse 3 cannot be overstated: don’t carry your baggage into your host community. This is not just about travelling light; it’s about going vulnerably. Forbidding staff and bag means missionaries are to be liminal, not in control. Jesus’ strategy contrasts starkly with the old story of David, who approached the foreigner Goliath with a staff and a bag full of five stones – in other words, to do battle (1 Samuel 17:40). Too often in Western missionary history, missionary baggage was weaponized because the ultimate intent was not to heal, but to dominate.

Forsaking bread and money is pretty straightforward – these are the means of sustenance on the road. Not to be self-sufficient guarantees the dependence of the missionary upon those she or he is approaching. This ensures that the host, not the guest, retains the upper hand. Having only one tunic is interesting. A “change of clothes” would have been a rare luxury among peasant Middle Easterners. Moreover, in Luke 3:11, John the Baptist exhorted listeners that “if you have two coats, give one to the poor.” The assumption is that missionaries have already distributed their surplus to the poor, rather than bringing it with them on the road. And if we don’t have an extra tunic, we’ll eventually have to adopt the clothing of our host!

Because costumes matter. They are a way of either fitting in or remaining apart. The history of the colonial era suggests that Christian missionaries got this bass-ackward. Not only did they bring trunks full of their own culture and presuppositions and clothes, but they demanded that their baggage (including their costumes) be imposed on their native guests. How different things would have been had Christians practiced a “disrobed” gospel, naked and unashamed . . .

At the centre of this teaching is the instruction to settle in a home that welcomes you (9:4). The implication is that one must stay long enough to truly understand the new place and people – which can take a very long time. This is another hedge on the temptation to impose. How different history would have been if these simple guidelines had been heeded! Of course, there must be a local host willing to provide hospitality. Better be on good behaviour.

This instruction is expanded in 10:5-8: “Don’t move from house to house, eat what you’re served, and leave only a blessing of peace on the house that welcomes you.” In other words, don’t look for a better deal, don’t demand special treatment, eat local, and be grateful. And second, says Jesus, the missionary must remain a guest, without a “settlement” footprint of colonization. Stay there, says Jesus, and leave from there. There’s the key: It is not presumed that the missionary is there to stay! The famous lament of Jomo Kenyatta rings in our ears: “When the Missionaries arrived, the Africans had the land and the Missionaries had the Bible. They taught us how to pray with our eyes closed. When we opened them, they had the land and we had the Bible.” But what missionaries were supposed to do, according to Jesus, was to offer gifts of healing and good news and move on. To stay only if asked, and on the terms of the host. How different history would have been.

The final instruction is the interesting ritual of what to do if the missionary is not welcomed, included because this is always and everywhere a real possibility. In that case, says Jesus – leave. Don’t retaliate, don’t force yourself on the hosts, and don’t take over their frickin’ house. Leave. How different things would be! The shaking off of dust is clearly a symbolic gesture that is important to Luke, since it appears several times in Acts. Paul leaves both Iconium and later Corinth (Acts 18:6) in such fashion, though note that the same demonstration is used against him by his Jerusalem opponents in Acts 21. Jesus identifies this dust-shaking as a form of protest in Luke 10:11, where he associates it with Sodom. This is because the great sin of Sodom – contrary to how most Christians understand that old tale – was lack of hospitality to strangers. In Genesis 19 the Sodomites refuse and then abuse the very angels that Abraham and Sarah had welcomed in Genesis 18. So Jesus is saying, yes, inhospitality is a serious problem, especially for missionaries. But all you can do is point it out. If folks don’t have ears to hear good news, keep going. Done and dusted, so to speak.

Europeans in the New World almost always initially encountered generous hospitality from the Indigenous peoples they met because welcoming strangers was, and is, endemic to native cultures. The chiastic structure of this teaching puts verse 4 at the centre: the command to respect one’s host by living within the limits of their capacity for, and willingness to extend, hospitality. Which is exactly what our missionary ancestors did not do here on Turtle Island. Indigenous hospitality was very soon abused by their guests, whose goal was never community, but conquest. Usurpation became theft, became profiteering. It’s mind boggling. Jesus’ instructions were simple, clear, and timeless. How different, how different, how different history would have been, had Christians heeded them.

As for us Settler Christians, we need to figure out how to be accountable to this legacy, how to heal it, and how to embrace again Jesus’ clear counsel, practicing only a disrobed style of mission that focuses only on bringing good news of an alternative to empire.