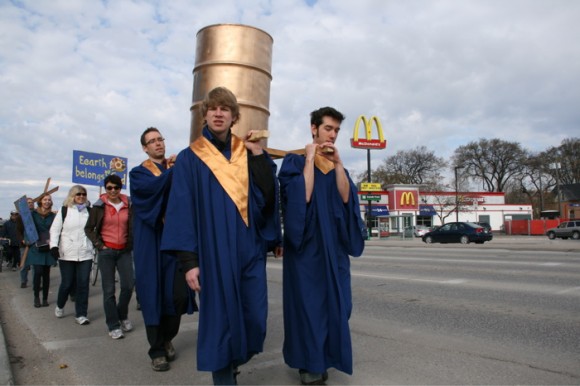 The event, organized by a group of Christians of mostly Mennonite and Anglican backgrounds, including Geez staff, began with a human-powered pilgrimage down several main Winnipeg streets. At the head of the procession was a golden oil drum that symbolized our consumptive lifestyles, carried on the backs of four people in choir robes. Hymns were sung as children marched with colourful signs calling for a less consumptive lifestyle that cares more for creation. Once the Pilgrimage arrived at Memorial Park in front of the Manitoba Legislature, people gathered under and around a red-and-white-striped tent and waited for the Consumption Sabbath service to begin. 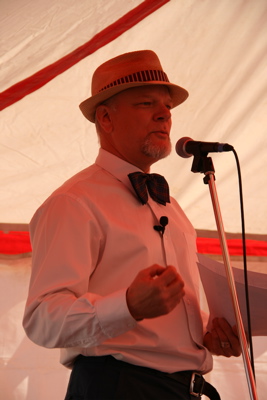 Led by a choir and small band, the congregation sang several lively hymns before listening to the testimonies of conversion by Christine Penner Polle and DeLayne Toews of the Canadian Mennonite University Farm Collective . After the rousing testimonies, our very own Aiden Enns took the stage as Brother Aiden John. Speaking in the style of Reverend Billy from the Church of Stop Shopping, Aiden John implored us to have a less scientific and more poetic connection to creation, urging us to take more pleasure in the nature around us. In slight twist on the traditional ‘Three R’s,’ Aiden John invited us to Recognize the abundant free gift of creation, Restrain ourselves as consumers, and Redistribute our wealth to those in need. 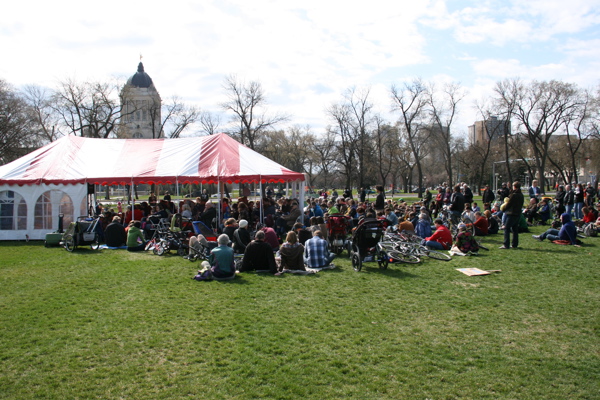 The service concluded with an altar call in which participants were invited to fill out their pledge cards with things they would do to take a break from over-consumption, from taking a digital sabbath to not flying for a year. As the congregation sang, the pledge cards were brought forward and taped to the golden oil drum to symbolize commitments to take a consumption sabbath. 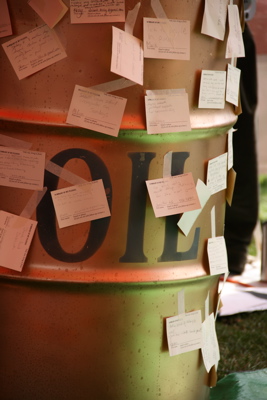