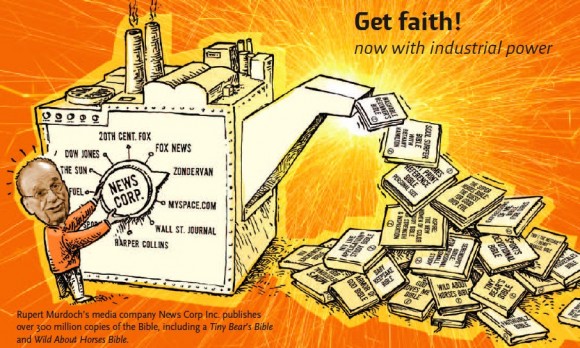 Most people know now that Rupert Murdoch presides over the News Corp media empire, and that he is fighting for his reputation after being forced to sink his scandal-laiden British newspaper News of the World, the most widely read English tabloid in the world. But few people know that Murdoch also owns Zondervan, the world’s largest publisher of Bibles. For 23 years, the News Corp family has included the leading seller of the best-selling book in history.

Biblical profiteering
For those us of who care about the Christian scriptures, what are we to make of this mix of billionaire media tycoonery, allegations of phone hacking and bribery, and the Holy Word of God? What are we to make of the fact that every time we buy a Zondervan product we contribute to Murdoch’s mogul-dom, which includes a personal fortune that Forbes pegged at $6.3 billion last year.

I asked Shane Claiborne. His books, Jesus for President (co-written with Chris Haw) and The Irresistible Revolution, are number 3 and 4 on Zondervan’s list of its top sellers. He has long been aware of the Zondervan-Murdoch connection and has considered it carefully.

I admire Claiborne, partly because he cares about ethics – he makes his own clothes and off-sets his air travel – and partly because he lives out his faith in what he calls the “abandoned corners of empire.” His particular corner is the impoverished Kensington neighbourhood of Philadelphia where he lives as part of The Simple Way community. Given his relation to “empire,” I wanted to know why he chose a News Corp company as his publisher?

The Zondervan advantage
“I want to have the broadest readership possible,” Claiborne says by phone, “I don’t want to be someone who just speaks to the choir.” He says smaller publishers have their advantages but the books he has written for them cost “two or three times” more than what they would if Zondervan published them.

Claiborne, who has preached his message via Esquire, Fox News (also owned by News Corp), Al Jazeera and many others, says the key is to “protect the integrity of the message.” If he is convinced the medium won’t change the message, he will work with organizations despite not “[agreeing] with all of their approaches or decisions.”

But even if the message is protected, his work helps enrich a rather well-maintained corner of empire. He feels “conflicted” about this. “I don’t think that the world exists in 100 percent pure and 100 percent impure options,” he says.

To judge, or not to judge
The ongoing News Corp scandal concerns him. “The current issues . . . in England raise all kinds of ethical questions,” he tells me, “and I would hope that a company whose mission is explicitly Christian, as Zondervan’s is, would take the opportunity to bear witness and to speak into the culture which is so terribly fallen.”

Claiborne is not sure if he will write for Zondervan again. He doesn’t rule it out.

There’s good and bad in each of us, he says, “we are called to work on the log in our own eye, and I’m sure as heck trying to work on the compromises that I make so that those are minimal when it comes to integrity.”

Point taken. This is not about demonizing Rupert Murdoch or Zondervan. No rendition of the Bible would condone that. Nonetheless, I’m not ready to say, like former Zondervan CEO Maureen Girkin did in a 2008 Christianity Today article, that “News Corp is a wonderful media giant.”

Preferential option for the lucrative
The allegations that sank News of the World, and have now spread to other News Corp papers in the U.K., demonstrate something about News Corp. They do not demonstrate that ethical integrity trumps the drive for profit at News Corp. News Corp is an aggressive business; it’s motive is to accumulate and concentrate massive amounts of wealth. Presumably it acquired Zondervan because it saw profit potential.

But is the Bible a business opportunity? Does it belong in the News Corp fold? Can we not read about “the least of these” without paying our dues to the greatest?

Or perhaps Murdoch is just an entrepreneur who enables the distribution of important materials (after all, he was awarded a papal knighthood by Pope John Paul II in 1998). Perhaps the world is just too gray to worry about the ethics of Bible publishing. Perhaps writers like Claiborne are subverting or redeeming something in need of redemption. Perhaps I overstate the link between News of the World and Zondervan. It’s just that I believe there should be absolutely no link at all. Bald greed has no place in Bible publishing.

Does God need News Corp?
We do not need to accept this arrangement. Christianity does not need to be about the best and biggest deal, and we can trust that the Good News does not require the help of an unscrupulous empire. Part of me would love to see some readers, writers and retailers engage in some respectful, humble, Gandhian non-participation with respect to the big Bible business. But it seems unbecoming to advocate a boycott of a company that publishes the books of a respected friend. It seems unbecoming to boycott the Bible in any way at all. Alas, I too feel conflicted.

Geez magazine editor Aiden Enns – who once cut the Zondervan label out of the spine of his Bible in protest – suggests a self-imposed tax or tithe on Zondervan purchases. If you buy a $20 Claiborne book, give an additional $2 to a good cause (maybe the Interfaith Center on Corporate Responsibility). Call it the “ethical compromise tax,” or the “sin tax” as Enns puts it. You could also look into whether your denomination has any News Corp investments. The Church of England is now publicly threatening to pull its $6 million share in News Corp.

As for non-participation, all I know for sure is that I don’t want a penny of my money going to fuel the News Corp empire, regardless of the path it takes from my wallet to Murdoch’s. Fortunately for me, the last time I crossed paths with Shane Claiborne he gave me a copy of the most recent Zondervan publication he collaborated on, Common Prayer: A Liturgy for Ordinary Radicals. I offered him warm thanks – it’s a great book – then said with a smirk, “this way none of my money needs to go to Zondervan.”